Information was confirmed by the press service of the police of Kiev. “Yes, we confirm information. One killed, two wounded, they were sent already to the hospital. The murder occurred at 11:30 at the intersection of Taras Shevchenko and Pushkin”, — said the Agency. The police have confirmed that the murdered Boronenkov. According to “Vesti”, one of the wounded his killer.

Emigrated from Russia, former state Duma Deputy Ilya Ponomarev also confirmed the killing of Boronenkov. In his Facebook he said that deceased went to meet him. To the question about the version of who was behind the crime, Ponomarev replied: “Everything is obvious”.

According to “News-Ukraine”, the shooting started after Boronenkov came out of the hotel “Premier Palace” together with the guard. The latter defended the former MP from the waiting arrow. As a result, the guard and the killer was injured. They are sent to the hospital. The killer is taken into custody.

“Several shots were fired. Information, where he brought the killer, does not apply to finished. We are currently working to confirm his identity. No longer consider it necessary to give additional information to the Russian security services to continue their terrorist activities,” — said the press-Secretary of the Ministry of internal Affairs of Ukraine Artem Shevchenko.

The head of the Kyiv police chief Andrey Krishchenko said the TV channel “112 Ukraine” that the first version, which is now under consideration, nature of the murder. It has been established that the assailant fired from a TT pistol.

In connection with the incident in the hotel arrived, the Prosecutor General of Ukraine Yuriy Lutsenko and the head of the security Service of Ukraine Vasyl Hrytsak.

Arrived on the scene of the murder of Maria Maksakova, Boronenkov wife (also ex-the Deputy of the state Duma), fainted on seeing the body of her husband, said in his Twitter journalist Roman Yukhnovets.

The Ukrainian side has not yet contacted the Embassy of Russia in Ukraine, said the representative of the Embassy. 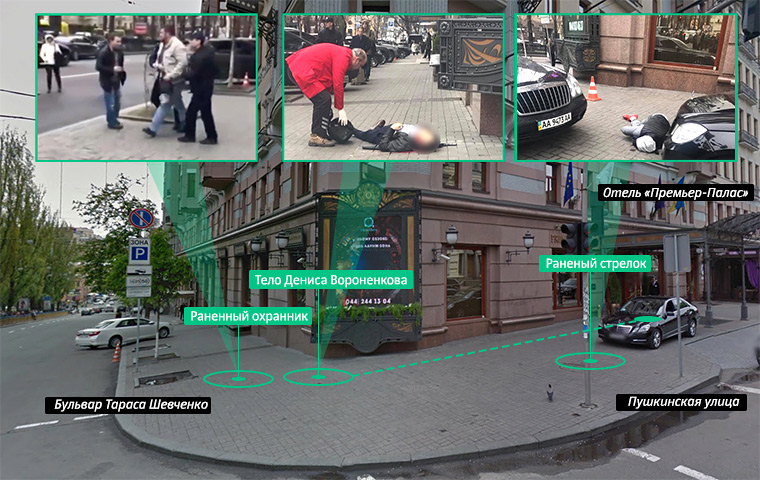 Denis Boronenkov, a former Deputy of Russian state Duma from the Communist party.
In Ukraine he left in October 2016, after losing the September elections to the state Duma. At the end of January it became known that the ex-MP gave Kiev testify against the former President of Ukraine Viktor Yanukovych on the case of his treason.

The Prosecutor General of Ukraine Yuriy Lutsenko said that Boronenkov told about the letter of Yanukovych to Russian President Vladimir Putin, in which he requested “to send troops to Ukraine” after Euromaidan.

In mid-February, Boronenkov in one of the interviews has compared Russia with Nazi Germany and called the annexation of Crimea annexation.

March 3, Basmanny court of Moscow arrested in absentia Boronenkov on charges of fraud and falsification of documents. Soon, he was declared internationally wanted. According to investigators, in 2010-2011, Boronenkov, together with other persons illegally reissued and sold a building that belonged to the confectionery firm of “Tom”. According to SKR, as a result of fraud, he received about $1.2 million and 6.4 million rubles.

This case is being investigated since 2011. In respect of its nine defendants have been sentenced. Testimony on ex-MP gave the former FSB Shishakov and Murzik, realtor Krylov and the General Director of “Toms” Maria of Vladimir (the sale of the building was carried out in its interests, however, profit from the Scam she in the end is not removed). All of them after pleading guilty received suspended sentences.

20 July 2016 in the center of Kiev in the bombing of the car died also moved to Ukraine of Russian journalist Pavel Sheremet on their way to the “Radio News”. Investigators are considering the professional activity of mass media as the main version of the murder. They are considering several versions: personal aversions to the journalist, the destabilization of the situation in Ukraine and bug killers, the purpose of which could be a civilian wife Sheremet, Olena Prytula, also used this machine.