The Bank of Russia on Friday, 24 March, will hold a support meeting of the Board of Directors, the results of which decide about the level of the key rate. As shown by the consensus forecast , which was attended by 19 banks, the opinions of experts about the actions of the regulator at the rate were distributed almost equally. According to most analysts (11 out of 19 banks), high inflationary expectations, the risk of continuing fall in oil prices, and the desire of the Central Bank to show consistency in its monetary policy will encourage the regulator to keep the rate unchanged since September of 2016, the level of 10%. However, the remaining eight banks are expected at the March meeting rate cut by 0.25–0.5 p. p.

Moreover, all experts agree that the Central Bank will soften the tone of the review following the meeting — in particular, note the improvement in macroeconomic indicators and gives a clearer signal about their future actions. 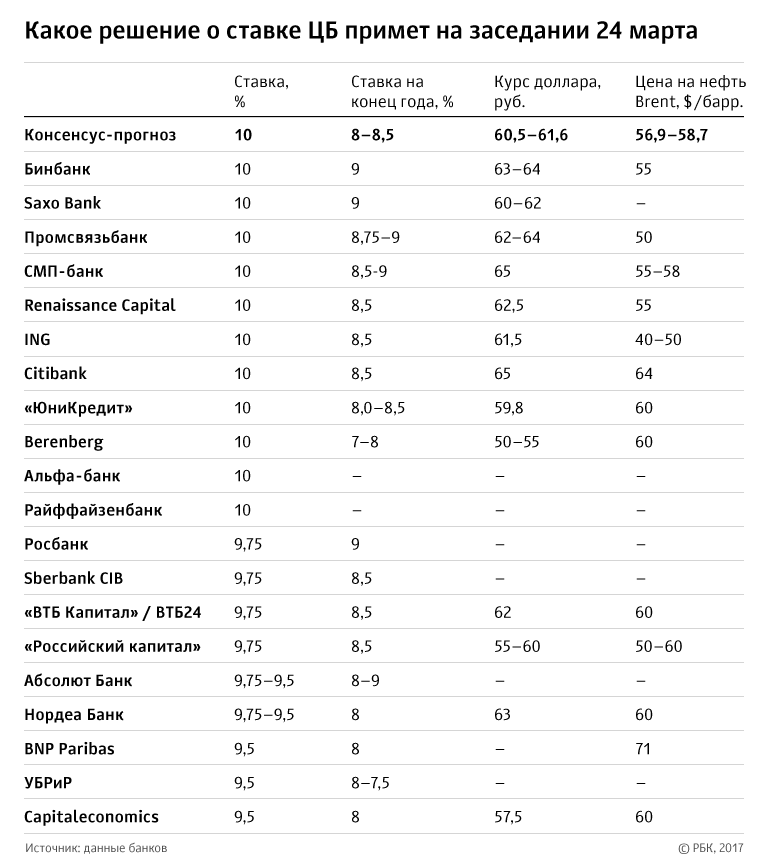 To maintain the key rate expected by 11 of the 19 participants in the consensus forecast Renaissance Capital, UniCredit, PSB, Bin Bank, ING Bank, Raiffeisen Bank, SMP Bank, Citibank, Berenberg and Saxo Bank and Alfa-Bank. His position they justify the continued high inflation expectations, the risk of continuing falling oil prices, anticipated increase in the fed rate. Another factor in favor of maintaining the previous level of rates is, from their point of view, the statement of the Central Bank on the results of the February meeting that the potential of reducing the key rate by the Bank of Russia in the first half of 2017 decreased.

“To prevent the rate reduction can considerations about the sequence of monetary policy, because the tone of the previous press release was very hard,” — said the chief analyst of the Bank Natalia Vasilyuk. According to her, the Central Bank will refer to the need to ensure that inflation is not only close to 4%, but in the future will remain around this level.

Dynamics of inflation expectations still above the target of the regulator. According to the survey conducted by “Old” by the order of the Central Bank, in February the value of the expected population inflation for the next 12 months rose by December 2016 1.4 percentage points to 12.9%, while the proportion of respondents who believe that in 2017, inflation will be significantly above the target level of 4%, back to the level of December 2016 (63%) after a sharp decline in January. According to the chief analyst of Promsvyazbank Roman Nasonova, the Central Bank at least until April will take a wait — up to confirm the trend in the decline of inflationary expectations of the population.

Forecast of the Bank suggests that the Bank of Russia in March the rate will not change, but will soften his rhetoric, allowing the possibility of a rate cut at a future meeting, likely in April. A similar opinion is held by Alfa Bank.

Statistics in favor of lower

Reduction in the key rate in March, expect eight banks, or 40% of the participants consensus: Sberbank CIB, “VTB Capital”, ROSBANK, the Bank “Russian capital”, UBRD, “absolute”, Nordea and BNP Paribas. According to their analysts, a significant slowdown in inflation in recent months gives the Central Bank reason for lowering rates by 0.25–0.5 p. p. thus, according to Rosstat, inflation in annual terms fell by 20 March to 4.3%. “This trend suggests that next summer the annual inflation rate is expected to decline to the Central Bank’s target level of 4%”, — analysts of Sberbank CIB in their review.

In addition, according to Sberbank CIB, the low rate of inflation will increase interest rates in real terms, which will negatively affect the economic growth. In this regard, analysts say, the prospect of a slowing of inflation to less than 4% should be considered as an important macroeconomic risk factor. “We believe that an overly sharp slowdown in inflation in December and February requires a response from the Central Bank,” — they explain their position.

Experts also point to the statement on 9 March, the head of the Department of monetary policy of the Central Bank Igor Dmitriev on the fact that the regulator may consider a rate cut at the next meeting. Market participants prior to this believed that the Central Bank will retain a wait until April, but the latest statements of the Central Bank aims to reduce the importance of the [February] of the forecast, noted in Sberbank CIB. Statements Dmitrieva prompted to revise the forecast, in particular, and analysts of “VTB Capital”. Among the grounds for a rate cut as early as Friday in addition to inflation, they are also called the growth savings and the reduction of retail trade turnover.

The participants of the consensus forecast expecting a softening of rhetoric of the Central Bank against the background of current macroeconomic conditions, mainly in connection with the steady slowing of actual inflation. According to experts, predicting the rates in March, a softening of rhetoric will form the basis of an interest rate cut by 0.5 percentage points in April or June. Analysts expect that the regulator will either give a promise “in case inflation risks decline, resume the gradual reduction of the key rate on one of the next meetings”, or will report that the “potential of reducing the key rate by the Bank of Russia in the first half of 2017 have increased.”

As you get closer to the inflation target of the Central Bank and the external environment, the regulator must reduce the risk premium in roubles against world benchmarks. In this regard, the expected occurrence of the phrase about the readiness “to consider a rate cut at one of the next meetings,” says Koshelev of ROSBANK. The Bank expects to reduce the key rate by 0.25 percentage points on a quarterly basis during the year, including at the March meeting.

Key factors influencing the exchange rate of the Russian currency on the horizon to the end of the year is likely to remain the dynamics of oil prices and the “appetite for risk” in global markets, says Roman Nasonov from the PSB. Thus a gradual lowering of rates by the CBR to 8.75–9.0 percent at the end of the year and the purchase of foreign currency in amounts determined by the Ministry of Finance, may ceteris paribus contribute to a certain weakening of the ruble. “Our baseline forecast assumes that by year-end pair dollar/ruble may return to the levels of 62 to 64 rubles per dollar,” — he said.