Coin Cabinet of Berlin’s Bode Museum, the collection of which is considered to be one of the largest in the world, became a victim of robbers. Thieves penetrated into the Museum through a window, stole one of the biggest world gold coins — minted in Canada “Big maple leaf”, weighing 100 kilograms, according to the newspaper Welt.

In the message of the Berlin police, which appeared on page office on Twitter, said that the robbery was committed about 3:30 a.m. local time. At this time, the movement of trains on the passing of the Museum branch of the s-Bahn (S-Bahn) was suspended, which allowed criminals to install on the rails of the ladder to climb out the window and escape with the loot.

Police declined to say whether it was installed on the window through which the robbers entered the Museum, alarms and what measures were taken to protect the coins. Currently, the Museum is closed to visitors due to the holiday.

Unique gold coin weighing 3215 ounces, or 100 kg of pure gold (sample coin 99 999, and this means that impurities have only a one in one hundred thousand parts of its weight) was minted by the Royal Canadian mint in 2007 under the nickname “Big gold maple leaf”. This symbol of Canada and is depicted on the reverse side of the coin, while on the front side you can see the portrait of Queen Elizabeth II, which de jure is considered to be Canada’s head of state. 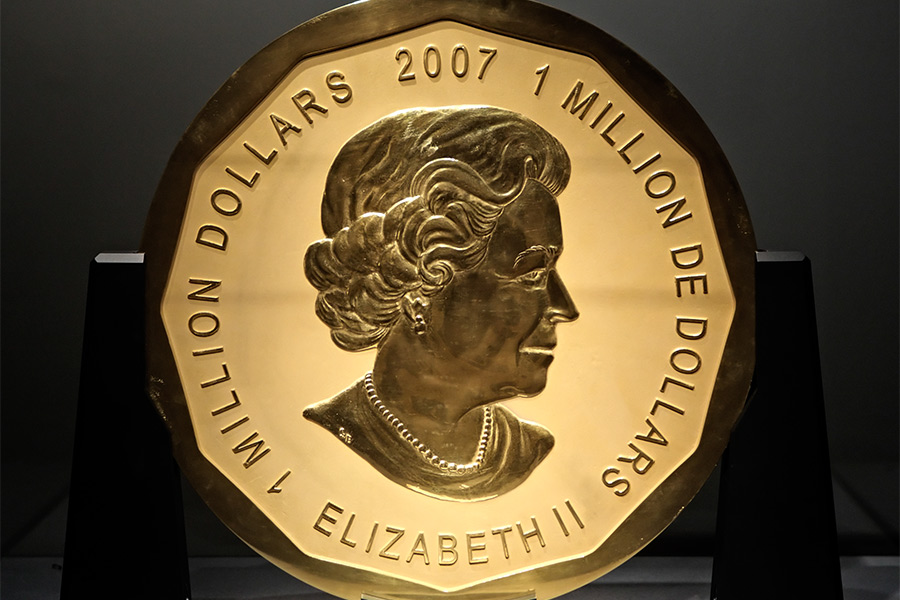 For five years (2007-2012) “a Large Golden maple leaf”, which is a zoomed in 3215 times a copy of a standard canadian investment coins “Golden maple leaf”, was considered the largest gold coin in the world (the diameter of the “Sheet” is 53,34 cm, a thickness of about 3.81 cm). However, in 2012, in Australia, has struck a real monster, weighing from a ton (diameter 80 cm, thickness 13 cm), and the Guinness world records canadian miracle coin was expelled.

However, the “Big maple leaf” is still considered one of the most expensive coins. Formally, the nominal value of the coin is 1 million canadian dollars (approximately $750 million), but its real value is much higher. Based on the current value of an ounce of gold ($1258), coin worth about $4 million, but given the fact that it is not just bullion and rarity (there are only six “Big maple leaves”) may be higher.

According to Reuters, one of the six released in Canada 100 kg gold coin now belongs to Queen Elizabeth II, three are owned by investors from Dubai, whose names are unknown, and the rich man is anonymous, about whom I know nothing. The fifth coin until 2010 belonged to the Austrian investment group AvW, but after its bankruptcy, was sold at auction and about $4 million went to the Spanish company Oro Direct, specializing in the trading of precious metals.

Who exactly belonged to coin, stolen from the Bode Museum, is not disclosed.