On Tuesday, March 28, Russian President Vladimir Putin met with his Iranian counterpart Hassan Rouhani. A day earlier, Rouhani met with Russian Prime Minister Dmitry Medvedev. The visit of Iranian President to Moscow was the third since his election to the post in June 2013. Only Russian and Iranian presidents have met eight times, the last meeting was held in Baku in August last year.

Both presidents expressed satisfaction with the way the talks were held. “We have more than 500 years we have had diplomatic relations. Iran is our good neighbor and a reliable and stable partner”, — said Putin. “Over the past 3.5 years step by step relations between the two countries has been developing positively,” said Rouhani.

The presidents announced that the talks have addressed all bilateral issues. Special attention, according to Putin, was given to the expansion of economic and investment cooperation. Also, according to him, the presidents discussed international and regional issues. On many issues of international politics the positions of the countries are pretty close, said the Russian President.

Putin noted that thanks to the joint efforts managed to establish a cessation of hostilities and to extend it to a significant part of the territory of Syria. Partner of Russia and Iran on the observance of the ceasefire, in force since 30 December 2016, is Turkey. Rouhani stressed the importance of talks on Syria in Astana, and expressed confidence that they will continue. The last meeting was held on March 13, but was complicated by the refusal of the armed Syrian opposition to come to the meeting. However, the guarantors of the truce was pleased how it went.

Special attention was paid to the presidents of the situation in Afghanistan, where, according to their estimates, a growing terrorist threat from extremists.

Rouhani also thanked Russia for assistance in the conclusion in 2015 of the agreement on Iran’s nuclear program. Iran and Russia support the continuation of the execution of the agreement, although one of the signatory countries, the USA, in recent times criticized him. President Donald trump has promised to renegotiate the agreement.

The U.S. position on the agreement — one of the factors that could spoil the cooperation of Iran and Russia if Washington will begin to put pressure on one of the sides, said the Director of the Center for analysis of middle East conflicts of the Institute of USA and Canada Russian Academy of Sciences Alexander Shumilin. While Russia could act as mediator between Iran, Turkey and Israel on the Syrian issue, but the growing influence of Iran in the conflict in the middle East, including in Yemen and Syria may complicate the position of Russia in the region, he said. 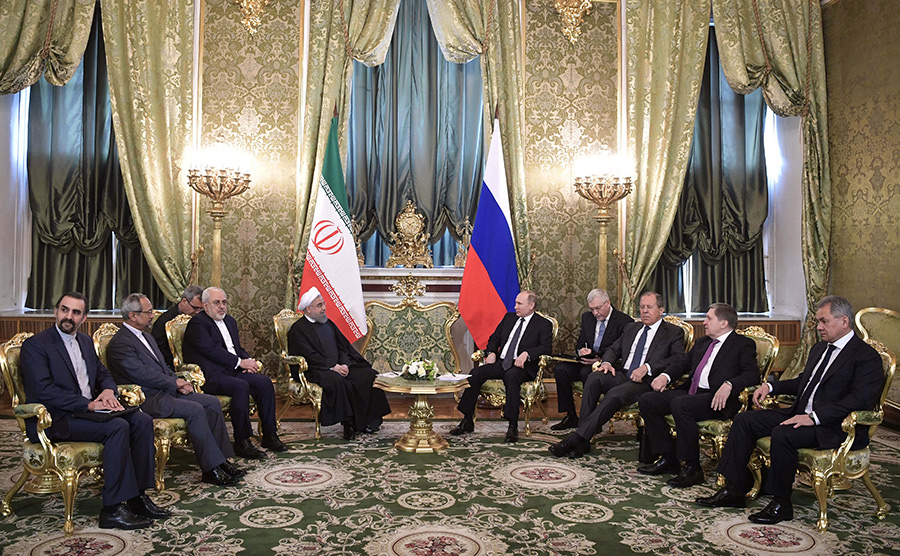 The meeting of Vladimir Putin and Hassan Rohani in the Kremlin

Energy will be more

After the lifting of sanctions on Iran, the trade turnover between our countries increased in 2016 by 70% compared to the previous year. According to the Russian Federal customs service, the volume of trade in 2016 amounted to more than $2 billion.

To increase trade would create a free trade zone between Iran and the Eurasian economic Union, said Rouhani. However, when the free trade area will be established, the presidents said. The Iranian market is one of the largest in the region, and Russian products and the products of other manufacturers of EurAsEC countries can be quite competitive due to a combination of price factors and the establishment of cooperation ties between economic entities of our countries, said Yaroslav Lissovolik, chief economist at Eurasian development Bank, program Director of the club “Valdai”. The signing of the agreement between Iran and the Eurasian economic community on the free trade zone is one of the closest agreements which may be concluded from the Eurasian economic community with third countries, and, based on previous official statements, it will take place in 2017, says Lissovolik.

The visit ended with the signing of 16 cooperation agreements. In particular, countries agreed to introduce mutual visa-free regime for travels of tourist groups.

There will be enhanced cooperation in energy sector: in the presence of presidents was signed six memoranda. To Finance the construction of the power plant Sirik on the Persian Gulf and the electrification of Railways in the North of Iran, Russia will allocate a state credit amounting to €2.2 billion, Putin said. The cost of the power plant will amount to €1.4 billion, €1.2 billion of which the Russian loan funds from the state budget, issued by the project for five years. Talks on these loans was carried out from 2015. The construction of the power plant Sirik capacity of 1.4 GW (four steam power unit at 350 MW) in the city of Bandar Abbas in southern Iran Russia and Iran have begun 20 Feb. Electrification of the railway section of Garmsar — Ince-breaker with a length of 495 km, Russia will be granted a loan of up to €1 billion.

Energy Ministers of Russia and Iran following the talks, signed a Memorandum on cooperation in the field of energy trade. As explained a source in the energy Ministry, we are talking about the exchange of surpluses between countries or an emergency replenishment of the shortage of electricity.

Discussed, according to Putin, and expand cooperation in the oil and gas sector, in particular, joint projects for exploration, production and transportation of oil and gas. The heads of the oil companies at the meeting of the presidents was not present. Before they presented the terms of oil contracts in Iran, and they took the time to think, told participants.

Putin and Rouhani also approved of the agreement of the member States of OPEC and other oil producing countries to create a balance of supply and demand in the oil market “acceptable price range” and to maintain the investment attractiveness of the oil industry. This is stated in the text of the joint statement of the two presidents. OPEC 30 November 2016 agreed to reduce its production by 1.2 million barrels. a day from October level. Eleven non-OPEC countries, 10 Dec agreed to reduce its production a total of 558 thousand Barr., including Russia — 300 thousand Barr. a day. The agreement was concluded for the first half of 2017 with possibility of extension.