Sberbank plans to sell its Ukrainian subsidiary Bank to foreign investors, so the authorities of Ukraine should not be a formal objection to the deal, according to experts interviewed . However, the process will not be easy, they warn.

Monday, March 27, Sberbank announced the signing of a contract for the sale of 100% shares of the Ukrainian subsidiary Bank to a consortium of investors in the Latvian Norvik Banka (owned by businessman Grigory Guselnikov, headed by the Bank in 2008-2010) and Belarusian private company owned by the British citizen Saeed Gutseriev, the son of billionaire Mikhail Gutseriev. The Gutseriev-younger became majoritarian in the consortium of investors. The transaction is expected to close in the first half of 2017.

In mid-March, the President of Ukraine Petro Poroshenko has approved sanctions against five Russian banks — Sberbank, VTB, BM-Bank, Prominvestbank and VS Bank. Among the introduced measures, the prohibition to withdraw money outside the country and any operations in favor of “parent” banks.

“Sanctions directed at the “daughter” of Russian state banks,” says Lev Dorf analyst of the Bank group for the EMEA region, the international rating Agency Moody’s. The aim of the Ukrainian authorities was the expulsion of Russian banks with state capital, agrees managing Director on Bank ratings “Expert RA” Stanislav Volkov. “Russian banks with private capital sanctions is not concerned, and the sale of Ukrainian “daughter” of Sberbank — is a replacement for the state private capital,” he concludes. “As a result of this transaction the Bank will come under the control of non-state actors that do not belong to Russian banks. Formally this transaction this issue is resolved”, says Dorf.

Advisor to the President of the Association of Ukrainian banks Alex Kusch emphasizes that the national Bank will have to study the business reputation of the said rates before you make a decision. “I think that in this case the national Bank of Ukraine is interested in stress relief. Rather, preliminary approval has already been received. Change of the owner of an EU citizen in this situation it may solve the problem. I think we can expect approval,” — said Kusch .

A number of experts doubt that the Bank will be able to easily gain the support of all four organizations. According to the head of the expert analytical Council of the Ukrainian analytical center Boris Kushniruk, if the change of ownership is nominal, this may become an obstacle during the approval of the transaction. Senior Director of the banking analytical group Fitch Ratings Alexander Danilov agree that to enlist the support of regulators will not be easy. He notes that prospective purchasers have business in Russia and therefore the authorities of Ukraine may have a suspicion that the transaction is of a technical nature.

According to a partner at international law firm Ashurst in London, Sergei Ostrovsky, the potential attention of European regulators, the transaction will be associated with its structure, due to the fact that Sberbank is under the sectoral sanctions. “European sanctions do not contain a direct ban on the purchase of European citizens (including British) companies or European subsidiaries of Russian banks included in the sanctions lists, — explained the lawyer. — This despite the fact that the proceeds from the sale will be obtained in this Russian Bank is the seller.” But it is essential that such a transaction did not contain a banned by the sanctions of the elements: for example, the provision of loan (or quasiradical) Bank to the seller or any operations with securities the Bank of the seller, the expert said.

Who will play first violin

Grigory Guselnikov has come in the banking sector in 1996. In 2001 he headed the Department of retail business of the Bank in 2008 became its President. In 2010, Guselnikov left the Bank and headed the Board of Directors of Vyatka-Bank. In December 2013 Guselnikov as a partner of the investment Fund G2 Capital Partners acquired 50% plus one share in Norvik Banka Latvia, and in June 2014 increased its stake to 82%. In October 2014, Norvik Banka became the major shareholder of Vyatka-Bank, and in July 2015 the Kirov asset Gusel’nikova received a new name — Norvik Bank (according to the Central Bank of Russia on 1 March 2017, its assets are 13.6 billion rubles). 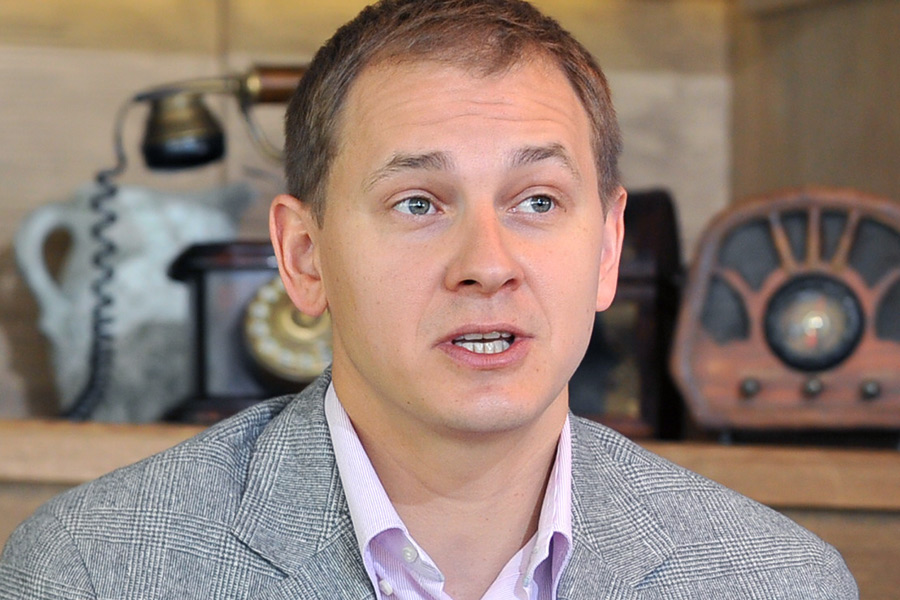 Gusel’nikov and his family (parents and wife) own 96% of the shares of Norvik; directly he owns 38.3% of the shares of the Bank, from the data on the website of the Central Bank. He is also the beneficiary of G trust/Settlement. Norvik occupies the eighth place in the rating of the Latvian banks in terms of assets, according to the Association of commercial banks of Latvia. Data from the British registry, that Guselnikov has Russian citizenship and the UK and lives in England. In Russia the businessman has no assets except the assets of Norvik Banka, from the SPARK database.

The group Norvik Banka supports the “European choice” of Ukraine, its press release and in Russia it will “reduce its presence” in the banking market. A source close to one of the parties said that Norvik plans to sell its Russian Norvik Bank, which occupies 182-th place in the ranking of “Interfax” in terms of assets. This will allow “to liquidate a number of political risks” in the Bank press release.

28-year-old said he was the son of the principal owner of “RussNeft” and “Safmar” Mikhail Gutseriev and the cousin of the principal owner of Binbank Mikhail Shishkhanov of — closely associated with the business of their relatives. He holds the position of General Director member of the Safmar JSC “Forteinvest” is one of the shareholders of the group, a member of the Board of Directors of “RussNeft” and the companies “Russian coal” and Neftisa (both members of the Safmar). He is a British citizen, said the press service of Norvik Banka, but, according to the British Registrar of companies Companies House, he has Russian citizenship. 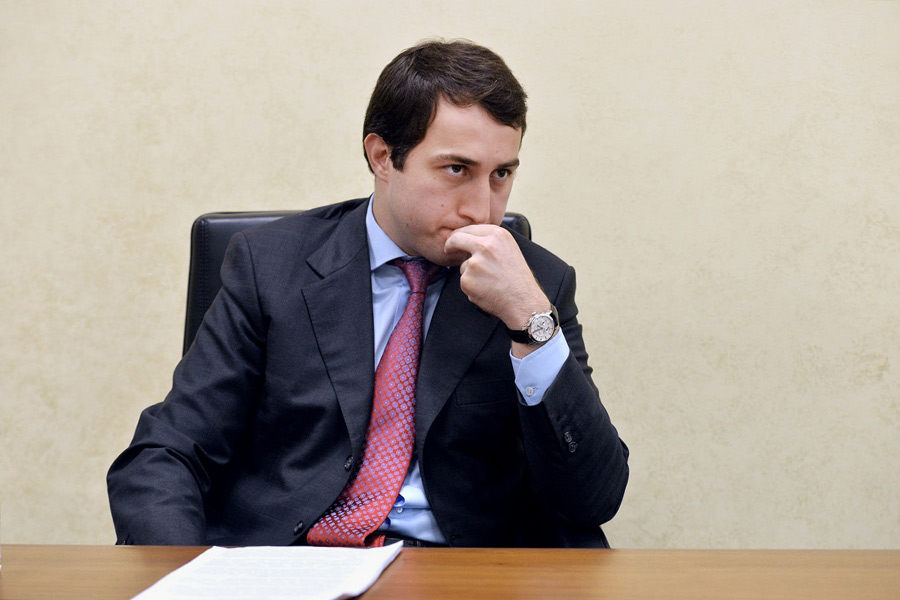 First job said Gutseriev was the Swiss oil trader Glencore, for many years cooperating with RussNeft. According to Gutseriev, his father gave him a recommendation for the company, but thanks to her he has only “accepted documents”; in General, any preferential treatment because of his father that Gutseriev-younger was not. In Glencore, he spent two years and eight months, the salary rates amounted to €65 thousand. “I was in fact our (family. —) but from Glencore”, — said Gutseriev.

Russia said Gutseriyev returned in 2014, and at the end of the same year, writes Forbes, headed “Forteinvest” is a company of oil refining and sale of petroleum products (in the statement to EGRUL he first appears as the head of the company in April 2015, at the end of 2014, the CEO is Mohammed Ali Yevloyev). Its main asset Orsk refinery capacity of 6 million tons of oil per year.

Express selling Ukrainian Sberbank will lead to fixation loss on investments in the capital of a subsidiary Bank and will be reflected in the financial statements of PJSC “Sberbank”, the company was recognized by the savings Bank. UBS analyst Michael helm said that the amount written off, considering investments in the capital of the “daughters” may be 8 billion rubles, or 1.2% of the total forecasted profit of Sberbank in 2017 (655 bn).

According to Volkov, Sberbank, accelerating the withdrawal from the market of Ukraine, minimizes its risks. “Said he provides the service to the authorities. That said he calls the Ukrainian “daughter” of Sberbank’s promising — a secondary cause. Such transactions are made so quickly, if there is no target to render someone a service,” he said.

“Direct risks “daughter” are associated with asset quality and a possible outflow of deposits against the background of sanctions and the change of ownership. They can be closed by shareholders, but by whom and to what extent, we still can not say, because do not know the details of the proposed transaction,” says Danilov.

“The sale of Sberbank’s Ukrainian subsidiary will not affect the rating of the head of the Russian Bank. “Daughter” immaterial relative to the group’s balance sheet,” adds Alexander Danilov from Fitch. In the first three quarters of 2016, the Ukrainian “daughter” of Sberbank accounted for less than 0.5% of the group’s assets, or about 115 billion rubles in the ruble equivalent.

Selling without the brand

Grigory Guselnikov on March 28 said that the acquired Bank will be renamed. Experts note that, most likely, it was a condition of the transaction.

“The Ukrainian “daughter” of Sberbank, oddly enough, is one of the most difficult assets for sale. With retail customers the Sberbank brand associated with Russia or the Soviet Union, contrary to the General trend. This means that the buyer of the “daughter” of Sberbank will have to change its name” — said Kushniruk.

“Collateral rebranding will cost a lot of money, and not the fact that these costs are justified and the clients will continue to have their savings in the Bank. The new owner of the Ukrainian Bank can not ignore these risks. We also don’t know what the credit portfolio at the “daughter” of Sberbank, because the audit was not. It is unlikely given these factors, the Bank may be interested in the real investors,” sums up Kushniruk.

“Given the negative information background around the “daughters” of Russian banks in Ukraine, which has only worsened with the introduction of sanctions, the issue price of local brand is not relevant. Before new owners of the savings Bank will be a question of restarting the positioning in the Ukrainian market and the strategic objectives. In this respect, the old brand is not relevant,” — says the head of group Finance ACRES Kirill Lukashuk.

“In the current situation the key task of the savings Bank is to faster to protect themselves from reputational losses, therefore, the rejection of the Sberbank brand is the primary goal,” adds managing Director on Bank ratings “Expert RA” Stanislav Volkov.

Problems in Ukraine came to shopping and restaurant chains with Russian roots. On March 27 activists of “Azov” held the protest in shopping centers in Kiev, where there are shops “Sportmaster”, Gloria Jeans, O’stin, Carlo Pazolini and cafes “Coffee house”. They burned Russian flags and called for a boycott of Russian institutions. But to open the pogroms is not reached, wrote “Kommersant”.

According to the sites of companies “Sportmaster” and O’stin (managed by a structure) in Ukraine more than 55 stores, Gloria Jeans — 20, the “Coffee house” — 12 institutions.

Managing Director of group of companies “Sportmaster” declined to comment. Representatives Gloria Jeans and “Chocolate girl” are unable to respond promptly to the request . The representative of the network “Coffee house” in Moscow announced that not aware of what is happening in Kiev events. “I do not know, unfortunately or fortunately, what is happening there. We are not related to the Ukrainian coffee houses “Coffee house”, — said the Agency interlocutor .

In recent years, in Kiev there have been calls to boycott the coffee chain “Coffee house”. Network Russia came to the Ukrainian market in 2002, first has grown to 26 schools, but then closed some stores, and in 2016 was offered for sale.

But while the problem affected not all. The head of one of major Russian retail chains present in Ukraine, said that any shares from its stores was conducted. In may 2016 appeared information that Kiev closed the restaurants network “Yakitoriya”. Today, according to the site network, four institutions operate in Kharkov. The company “Rosinter RESTORANTS”, represented in Ukraine by the brands Il Patio, T. G. I. Friday’s and Costa Coffee, said on its website that in Kiev’s Borispol airport continues its five institutions, but they are under renovation.

A large part of the present Russian operators are very restrained in their development plans and mainly focuses on optimizing the existing network, confirmed the representative of the Ukrainian division of Colliers International.

In recent years the Ukrainian market has left many Russian companies. In 2014, X5 Retail Group has sold the shopping network “Crossroads” in Ukraine, Dnepropetrovsk retailer of Varus. In the same year, after three years of the presence of closed shops Bosco Sport.