On Wednesday morning, March 29, the leader of the party “Fair Russia” Sergei Mironov said that Russian Prime Minister Dmitry Medvedev is to comment on the investigation of the Fund of struggle against corruption (FBK), in which he was accused of illicit enrichment. The investigation FBK “He’s not Dimon” has become a pretext for opposition rallies across Russia on Sunday, 26 March. Only in Moscow on the results of the unsanctioned rally were detained more than a thousand people.

At a briefing in the state Duma on Wednesday morning, March 29, Mironov said that I watched the movie-the investigation of the FBC, but new information in it have not found, although “enjoyed spectacularly beautiful”. “If the 14.5 million citizens of the country that a look, a politician should know that people care about and why call one person responded to tens of thousands of people”, — said the leader of the socialist-revolutionaries, urging the authorities to speak publicly about the activities close to the premiere of the Fund referred to in the investigation. However, he noted that “some political forces are trying to solve their political” tasks, pedaling the issues of corruption, and warned against a repetition of the Ukrainian events. Mironov called for “a clear answer” to the question about the investigation, not the founder FBK Alexei Navalny, and “the millions of citizens who have the question remains in my head.”

A source in “Fair Russia” recognizes that the position to criticize whether the Medvedev — has changed literally at the last moment. He said: “a few days ago I said that we did not respond to any investigation of the Bulk, nor the calls of the Communist party to hold its parliamentary investigation.” A just Russia is ready to put the issue on the facts stated in the investigation, and during the nearest meeting of party leaders with President Vladimir Putin, said another source in the party. 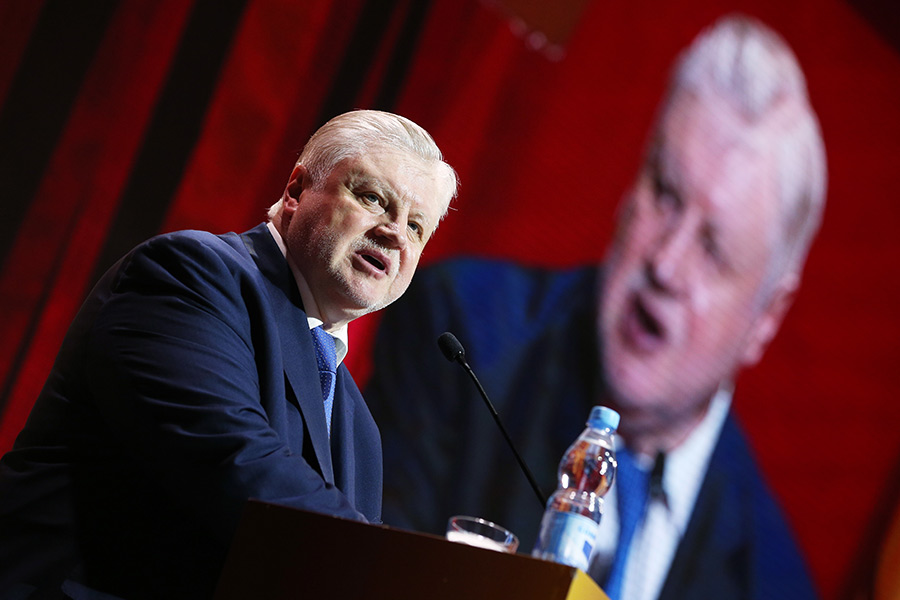 On March 24 the Communist party faction in the state Duma demanded to check the facts from the investigation FBK Bulk of the Prime Minister Medvedev. Support the demands of the Communists did not rule out the liberal democratic party and “Fair Russia”. A just Russia is ready to accede to the request of the Communists after the formal request, says a source in the faction.

Motivation Mironov political analyst Mikhail Vinogradov connects with the anxiety of the leader spravorossov about the risks to get lost in the background of the Chairpersons of the CPRF and the LDPR. Another reason could be that he considers the desire the head of the faction to push the Kremlin, that he finally decided on the vision of the role of the parliamentary parties. “Mironov may catch different signals. Signals about the weakening of the Prime Minister really do — but the leader spravorossov can hardly vouch for their authenticity and finality, so now his statement is more like a reconnaissance in force”.

On Wednesday morning in parallel with Mironov on a theme of the protests was made by the speaker of the Federation Council Valentina Matvienko. “The government should not just say or pretend that nothing is happening,” — said the speaker of the upper house of Parliament, urging “not to hide the head under the wing”. “All officials, MPs, senators, the Executive authorities in the regions — will definitely have to meet people, to understand why they come to the protests they care about, to discuss ways to address these issues,” — said Matvienko.

Matvienko urged the authorities to conduct a dialogue with society Video: the Federation Council

The Senator from the Irkutsk Vyacheslav markhayev proposed to require the state office of public Prosecutor investigate all the facts related to income and assets, Prime Minister Medvedev. “We continue stubbornly silent about the events of the last days of nationwide scale — unauthorized rallies Alexei Navalny in almost all large cities of Russia, multi-day protests of truckers because of the system “Platon”, the local regional protests related to defrauded real estate investors, low wages,” said Markhayev during the hour of statements in the upper house. The Senator saw in the protests a signal of systemic problems in the country. Offer Marhaeva to check the expenses and income of the Prime Minister supported the Senator from Tuva Lyudmila Narusova.

Markhayev said that Matvienko is prepared to support his initiative Protocol order if he correctly formulate his idea. The Senator intends to modify the statement by Medvedev and already on March 30 to make it to receive instructions from the Chairman of the Federation Council.

Matviyenko has long been on many issues occupies a special position, says Vinogradov. Speaker of the upper house he calls “a sincere politician, past school 1990-ies and is sensitive to the assessment of the possible risks.” Political analyst Yevgeny Minchenko saw in the speech Matvienko attempt to “add a public hardware weight to be opposed to [the Chairman of the state Duma Vyacheslav] Volodin”.

Deputy Secretary of General Council of party “United Russia” Yevgeny Revenko agreed with Matviyenko, that “to remain silent and shy away from serious political events is impossible”, but, according to him, the United Russia party and “did not go” problem. The topic of corruption he called a “systemic problem that struggle is not questionable funds, and law enforcement agencies”. “The matter [ex-governors of the Komi Republic and Sakhalin] Gaiser and prizes, millions of Colonel [MIA] Zakharchenko — this is an example of a real fight against corruption, the rest — production of commercials on the Internet calls for participation in illegal actions is a fraud and a cynical game on such an exciting issue,” said Revenko .

Medvedev in the Arctic

Press Secretary, Natalya Timakova commented on the investigation of the FBC on the day of its publication. “Bulk material has a pronounced pre-election character, as he himself says at the end of the video. To comment on the propaganda attacks of the opposition and the convict character, who said that he already has some campaign and fights with the authorities, is senseless,” she said.

Further any comment from the White house to investigate and the subsequent anti-corruption rallies were not, except for a short record in Instagram premiere. The question of how the President had day when the inhabitants of Russia at the protest urged the Prime Minister to answer charges of corruption, the Prime Minister replied: “Well, ski, ride” and put a smiley face.

While in the Duma and the Federation Council criticized the Prime Minister for his silence in response to criticism of the opposition, on Wednesday, March 29, the Prime Minister went with Putin in Arkhangelsk oblast. Joint trip with Putin is a signal that Medvedev resignation not in danger, I’m sure close to the Kremlin source . The source said that thus the President expressed confidence in the Prime Minister. The first person in the country visited the archipelago Franz-Joseph and familiarized with the process of elimination of environmental damage in the Arctic zone. This was reported by the press service of the government. 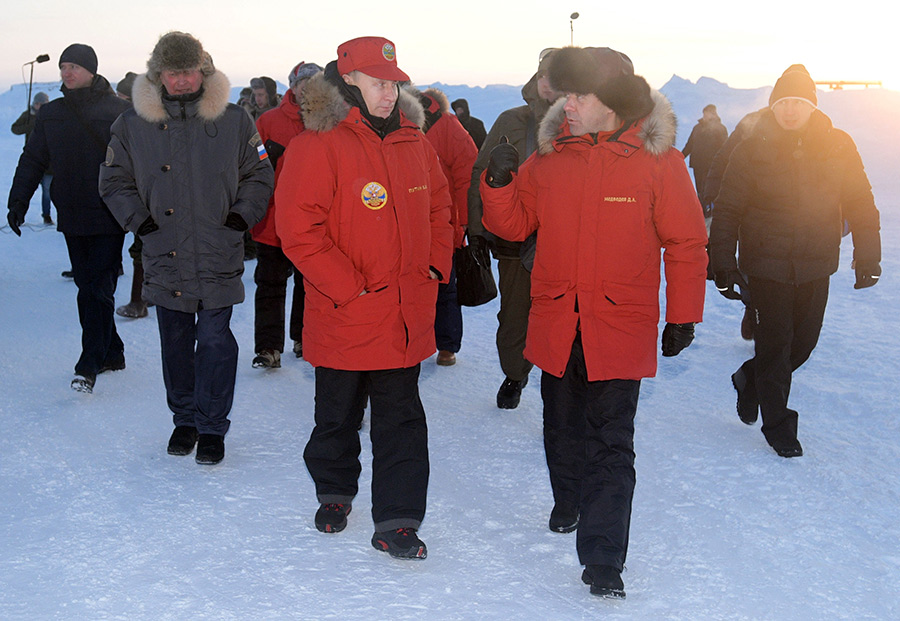 Vladimir Putin and Dmitry Medvedev in the Arkhangelsk region

Risks for the Prime Minister

Experts agree that Medvedev, though weakened as a political figure, but retired in the near future will not go away.

Nationwide protests on March 26 deprived the team of Medvedev one of its trump cards, says Minchenko. If before his men in vnutripolostnyh discussions have repeatedly stated that in 2011-2012 the people “took to the streets for Medvedev”, now this argument is impossible, he explained . “I think the protests on 26 March finally knocked Medvedev from among the potential candidates for participation in the presidential race in 2018. But paradoxically, this somewhat strengthened his position as Prime Minister because Putin does not like to make a decision under pressure,” said the analyst. The political weight of the Prime Minister for anticorruption stock, of course, hurt, and in the future may post in connection with other political events, Minchenko concludes.

“Of course, all felt that the Prime Minister has waned,” commented cross-Medvedev criticism by both houses of Parliament, the political scientist Abbas Gallyamov. In his opinion, to preserve the loyalty of the elites need serious efforts of the Kremlin, and while he ostentatiously idle. “In this situation, the most daring players there is a desire to meet the public demand. It is obvious — on charges necessary to answer”, — the expert believes.

We can not exclude that someone wants to be Prime Minister, but it cannot be the main explanation for what is happening, I’m sure Gallyamov, because of this chair “you can dream only two or three people,” and the other authorities are guided by other logic.

The political situation, despite emerging rumors about the resignation Medvedev, speaks in favor of the version about saving the Prime Minister’s position, wrote in a column for Andrey Kolesnikov, head of the program “Russian domestic politics and political institutions” of the Carnegie Moscow center. In his opinion, becoming the target of mass discontent with the authorities, the Prime Minister has become “a living symbol and shield of the entire political class, preoccupied with self-preservation”. And to take Medvedev for the President means going towards the street and Bulk.

Sees Kolesnikov and administrative sense in the change of the Prime Minister, as the stagnation in the economy threatens to collapse until the election of 2018. But to dismiss the Prime Minister, performing functions for operational business management, you only need to search for at fault crash or do it when you upgrade the Cabinet in the next presidential term.

Political analyst Nikolai Mironov sees in the speeches of the deputies and senators attempts to seize control of the protest and take a blow from the President to the corruption suspected not him but the Prime Minister. According to him, as Medvedev and Putin for too long been in the minds of Russians tandem, the Prime Minister charged in corruption casts a shadow on the President. That is, the resignation of the government still may occur in connection with the presidential election campaign, the expert concludes.