April 2 marks the 20th anniversary of the Union of Russia and Belarus, but “fraternal” state to meet the date of the circular at the low point of their relationship, at least for the last six or seven years. Belarusian-Russian relations are experiencing “full-blown crisis is complex, which includes our differences on specific questions of economic nature and contradictions on fundamental issues of strategic and military-political nature,” said the Minsk Center for strategic and foreign policy studies. Shortly before the anniversary of the Union, in February, President of Belarus Alexander Lukashenko complained that Russia “kicks in the tail and mane” agreement between the two countries, including in the issue of gas prices. One of the reasons of such behavior of Moscow, according to Lukashenko, — certain forces in the Russian establishment, but not President Vladimir Putin, whom Lukashenka on March 28, called “the brother” (3 April they will meet in St. Petersburg).

The Kremlin on the same day when Lukashenko at his big press conference 15 minutes in a row criticized the Russian authorities, said the figures, from which it follows that “the Russian side has provided and continues to provide large-scale economic, political and other assistance to Belarus.” As an example, the press-service of the Kremlin has led the allocation of Minsk more than $6 billion of loans and annual duty-free oil supplies in the period from 2011 to 2015 in volume from 18 million to 23 million tonnes. “our Entire Russian budget in this period was a shortfall of $22.3 billion, All this is nothing as direct and indirect support of the Union of the Belarusian state”, — said in a statement. 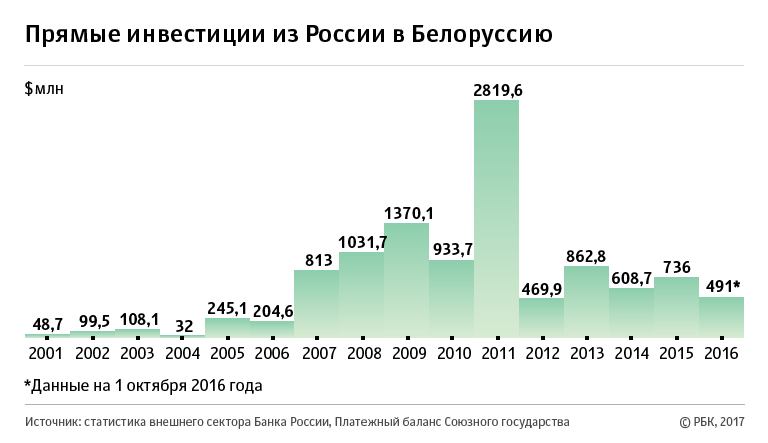 What is the real extent of economic dependence of Belarus from Russia? “If you look at the numbers, which is the IMF, you will see impressive numbers of hidden and direct support of the Belarusian economy”, — tipped off Putin in late February at a press conference in Bishkek. Indeed, the IMF in September 2016 estimated General support to Belarusian economy from Russia at $100 billion only for the period 2005-2015, or about $9 billion a year (see infographic). In different years the amount of “total net of support” from Russia ranged from 11 to 27% of the Belarusian GDP, from IMF data provided . But it is clear that in recent years the Russian assistance to the Belarusian economy is shrinking, and this may partly explain the recent dissatisfaction with Lukashenko. 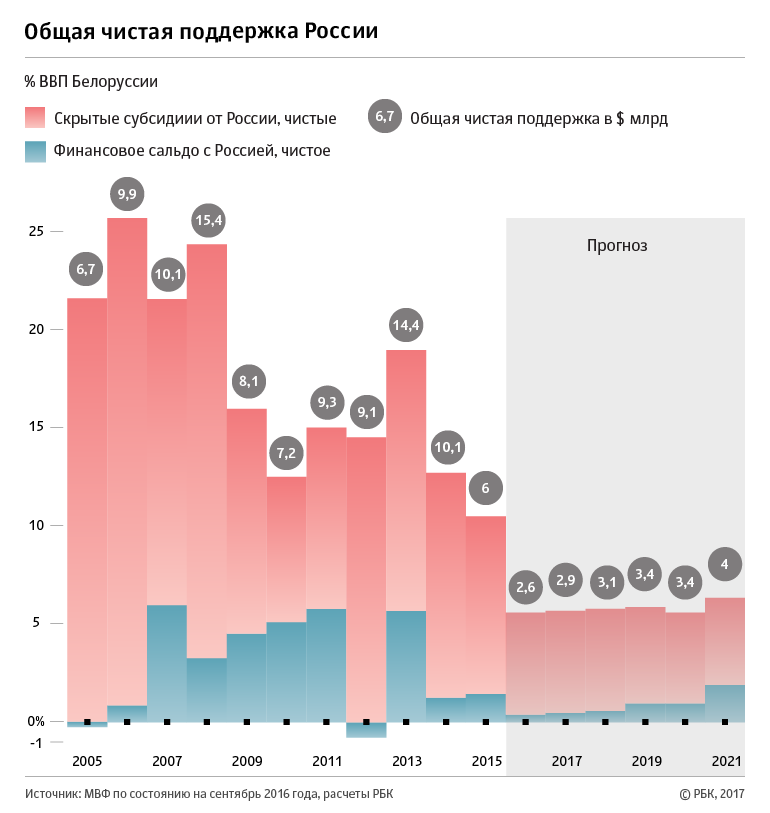 The IMF believes total support as the sum of two components — hidden subsidies through discounts on Russian energy and net financial support. It turns out the most extensive evaluation, as in the composition of financial support, the IMF takes into account not only inter-state loans, but the balance of mutual direct investment and loans to Minsk the Eurasian Fund for stabilization and development (EFSD, former EurAsEC anti-crisis Fund), resources of which 88% are formed Russian contributions (at the end of 2015, the Minsk owed the Fund $1.94 billion, and in 2016 took another $800 million).

This approach may not be entirely honest, if you want to evaluate state financial aid, says the analyst of an ACRE Dmitry Kulikov — among foreign direct investment is private, they can bring a real income, when in Russia back dividends or interest. In his opinion, it would be reasonable to take to calculate the debt of Belarus on state loans (including loans to Russian state banks to the Belarusian government) and the amount of accrued subsidies for oil and gas supply, and direct investments is not taken into account.

The debt of Belarus for intergovernmental loans from Russia at the end of 2015 was $6,02 billion, follows from the balance of payments of the Union state, available on the website of the Bank of Russia (the review for 2016 yet). The Finance Ministry refused to disclose the current debt of the Belarusian government, and the Finance Ministry of Belarus did not respond to a request . The last time the intergovernmental loan publicly reported in July 2015, when the Minsk received a Russian loan of $760 million As of the balance of payments of Belarus with Russia for 2016 (available on the website of the Belarusian national Bank), last year the net borrowing of the Belarusian government in Russia totaled $250 million, but it could be loans from Russian state banks. Their help is a great channel of Russian investments in the Belarusian economy.

In 2012, Vnesheconombank agreed to provide Belarus up to $10 billion for the construction of the Belarusian nuclear power plant under an intergovernmental agreement, but so far only allocated the first tranche of $500 million (in may 2014) and selected from only $248 million, said in December the Chairman of the Bank Sergey Gorkov. Sberbank lent the state “Belaruskali” — $900 million in 2011 and $550 million in 2015. overall, as of October 1, Russian banks held in Belarus assets of $4.9 billion (net of their liabilities there is $3.7 billion). VEB, Sberbank and Gazprombank didn’t respond to requests , and VTB said that the portfolio of loans to its Belarusian “daughter” of local companies with government participation is in terms of Belarusian rubles, about $75 million.

Up to 90% of economic support for Belarus from Russia in the understanding of the IMF account for hidden subsidies for the supply of gas, oil and petroleum products. Head of sector, Institute for energy and Finance Sergei Agibalov estimates that the total volume of Russian subsidization of Belarus preferential energy supply since the early 2000s amounted to nearly $100 billion, or more than 200% of the Belarusian GDP in 2016. Subsidies on gas in 2001-2016 years amounted to $49.4 billion, oil at $46.9 billion, follows from the calculations for Agibalova . And unlike loans that are returned with interest in the oil privileges for Belarus — it is in permanent indirect losses of the Russian budget. “It’s not a waste of money is calculated in steps, based on the future result”, — assured Vladimir Putin at the end of February.

“All the years of independence Belarus has received gas from Russia at extremely favourable terms — in some years, it was buying gas at much cheaper than all the neighboring European countries,” — said Efimov. Gas benefit he calculates as the difference in the price of imports by Germany (this compares major consumer, the price of Russian gas on the border with Germany is published in open sources and can be considered a market competitive price, he explains).

Russia supplies to Belarus duty-free crude oil and processed oil products delivered to Belarus abroad with the collection of the fee and credited to her to the Belarusian budget. Subsidies from Russia recently declined because of the peculiarities of export duties. The decline in world oil prices leads to a smaller decline in import prices of crude oil, which Belarus imports from Russia, compared to the reduction of prices on oil products that Belarus exports is a result of the tax maneuver in the Russian oil industry, explains the Eurasian development Bank. “At high oil prices, Belarus bought it twice cheaper than market price and now 25% cheaper, — says Director of the research Center of international trade Ranhigs Alexander Knobel. Russia depends on oil and gas, while Belarus is similarly dependent on Russian oil and gas market. If it worsens, exacerbated the problem.”