The Prime Minister of Serbia Alexander Vucic won the presidential elections held on Sunday, 2 April. After processing more than 90% of the ballots the head of government received 55.1 per cent of the vote, turnout was 54.6%, reported the election Commission of Serbia.

In second place far behind was the former Commissioner for human rights Sasha Jankovic, who scored 16,27% of the vote. The third result from a 25-year policy and parodist Luke Maksimovic (9,44%), supporters of which were mostly young voters.

Between Russia and the EU

Addressing supporters April 2, Vucic called his victory “very clear”. “The vast majority of people in Serbia support the continuation of the European path for Serbia, while maintaining our traditionally good ties with Russia and China”. “I scored 12% more votes than all the candidates combined,” he added. This, according to Vucic speaks of stability in the country.

Vucic is a supporter of the entry of Serbia into the European Union and cooperation with NATO, but not membership in the Alliance. The country became a candidate for EU membership in 2012. However, Serbia refuses and the development of relations with Russia. Vucic became Prime Minister on the results of the early parliamentary elections in 2014, which received the majority of his Serbian progressive party. The Serbian government when it did not support sanctions against Russia imposed by the European Union and supported by other applicants for EU membership — Montenegro and Albania.

A week before the elections, Vucic visited Moscow and Berlin. At the talks in the Kremlin on March 27, Vucic discussed with Putin the escalating economic cooperation, arms transfers, the situation in the Balkans. Russia is the third largest trading partner of Serbia, with a share in turnover of 7%. Russia mainly exports oil and gas, from Serbia, the main supply of fruit and vegetables. According to 2016, the turnover between the two countries amounted to €2.3 billion, a decrease compared with the previous same period due to the decline in oil prices and the ruble exchange rate. The volume of trade with the EU, Serbia has ten times more: for 2016, the turnover amounted to €20 billion.

Russian officials joy about the victory of Vucic does not hide. Russian President Vladimir Putin in a telegram congratulated him on his “convincing victory”, calling the future President “a principled supporter of strengthening the friendly relations between Russia and Serbia”. Moscow impressed that Vucic managed to win the election, said the press Secretary of the President Dmitry Peskov.

Of the EU officials also do not hide their satisfaction. “This vote of confidence shows that the people of Serbia fully supports your chosen European path, which will lead the country towards membership in the EU”, — said in his congratulatory message to the leaders of the European Council and the European Commission Donald Tusk and Jean-Claude Juncker (quoted by TASS). 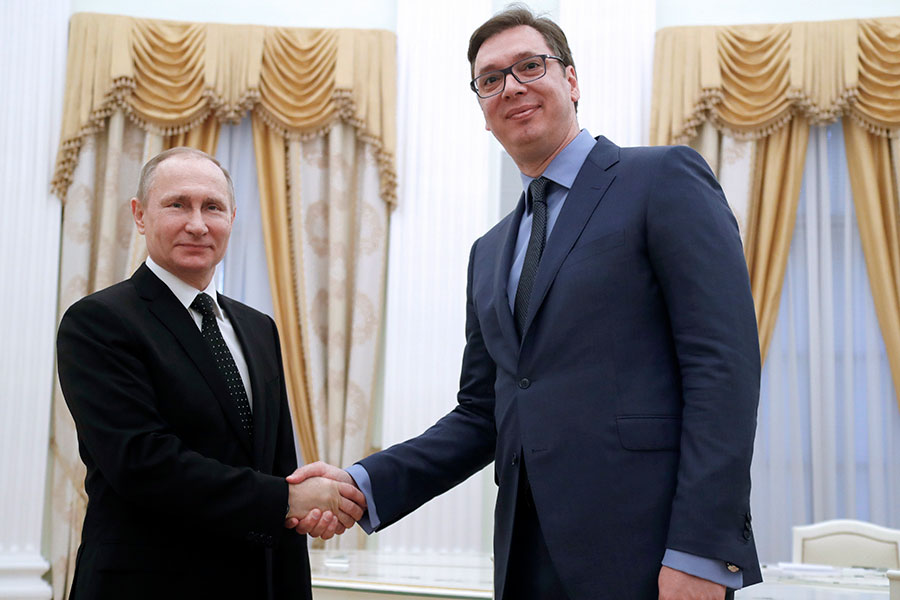 The victory of Vucic in the first round helped his visit to Moscow and talks with Putin, he managed to win over part of the Pro-Russian electorate, I am sure Petr Iskenderov, a senior research fellow at the Institute of Slavic studies Russian Academy of Sciences. The expert believes that the President Vucica will continue discussion and possible connection of Serbia to a major Russian energy projects, in particular to the “Turkish stream”.

Iskenderov also indicates the interest of the Serbian authorities in developing trade-economic cooperation with Russia, participation of Russian companies in the privatization of the Belgrade international airport Nikola Tesla. According to him, the agreement with Russia, reached Survived as Prime Minister, will be implemented in the future, and the threat of reorientation Vucic in the West, especially given the crisis of the European Union.

Vucic victory in the elections does not benefit Russia, as it is oriented to the West and openly says that EU membership is no alternative path for Serbia, and this way he did not come, I do not agree the head of the Center for the study of modern Balkan crisis of Institute of Slavic studies Elena Guskova. “With a great desire to join the EU, he [survived] will be forced somehow to agree on the foreign policy of Serbia with the policy of the European Union, for example, the introduction of sanctions against Russia”, — said Guskova. Meeting with Putin on the eve of elections in Serbia is merely a PR campaign that will not bring anything new to collaboration, she said.

26 March elections to the Parliament of Bulgaria, which was won by the party “Citizens for European development of Bulgaria” the former Prime Minister of the country Boyko Borisov. It was voted 32.6% of voters. Advocated the development of relations with Russia, the Bulgarian socialist party received the support of 27.19 per cent of voters.