Economic relations between Moscow and Minsk controversial issues left, announced the President of Russia Vladimir Putin on 3 April after a meeting with his Belarusian counterpart Alexander Lukashenko. He confirmed: “we have no outstanding issues.”

The dispute of Russia and Belarus, which affected in particular the oil and gas supply and trade of agricultural products, again demanded the personal intervention of heads of state. “It’s bad enough that presidents have to intervene in certain problems not of our level. But what can you do — this is the practice,” complained in this regard Lukashenko. The presidents did not specify the content of the agreements in the oil and gas sector, stating that everything will be formalized within ten days.

The day after the meeting of Putin and Lukashenka has become clear that key details of the dispute are still unresolved: in particular, the Belarusian side confirms that he has acknowledged a debt to Gazprom for gas deliveries: the Russian side has reached nearly $730 million it is also Not clear at what price will continue to supply Belarus with the fuel of “Gazprom”, and without all these details it is difficult to assess who won and who lost as a result of agreements.

If Minsk recognized the debt for gas, according to Deputy Prime Minister Arkady Dvorkovich and the Russian energy Ministry, the summit was considered a failure for the Belarusian side, said the Deputy Dean of the faculty of world economy HSE Andrew Suzdaltsev. The price of gas will begin to decline until next year, and by the time of the arrangement can again change; Minsk also had to abandon claims to the head of Rosselkhoznadzor Sergey Dankvert, without which it would be impossible to resume cooperation with the Agency, explains Suzdaltsev.

Belarusian political analyst Valery Karbalevich, in contrast, believes that Russia was forced to go for more than Minsk, concessions will be recovered oil supplies in full and restructured debt. What you have to recognize the debt to “Gazprom”, it was clear to the Belarusian authorities, he said.

However, pay attention Karbalevich, the agreement is not yet documented, but in the past there were cases when the alleged agreement was not implemented. Putin and Lukashenko have demonstrated that they have a good relationship — the conflict between the two countries, apparently, is regarded as settled, but the concrete results of the agreement are still hard to judge, says a senior analyst with the Belarusian Institute for strategic studies (BISS) Dzianis meliantsou.

What a deal on oil and gas

“We found a scheme in which we maintain our approaches, bringing together our positions on prices,” Putin said about the settlement of the gas dispute. The Russian President said that the parties “found the possibility of mutual concessions” and agreed on the prospects of cooperation in the next three years. Putin also said that Moscow and Minsk are ready by 1 January 2018 to develop rules for the common market of gas, and by 2024, the parties plan to negotiate the signing of the intergovernmental agreement on the common gas market of the Eurasian economic community.

Lukashenko, in turn, said at a press conference, Putin expressed its readiness to refinance the debt of Minsk. He did not specify what kind of debt it is. Tuesday, 4 April, according to BelTA, the first Deputy Prime Minister of Belarus Vasily Matyushevsky said that Russia refinances debt of the Republic in the amount of $750-800 million for intergovernmental loans principal debt and interest to maturity this year. At the end of 2015 the debt of Belarus for intergovernmental loans from Russia were $6 billion in 2016 Minsk repaid $300 million of such loans in 2017 had to transfer $741 million (data from the Belarusian Agency BelaPAN). The press service of the Ministry of Finance and press Secretary of the President Dmitry Peskov refused to comment on the issue of granting Belarus a new loan to refinance existing debt, the Finance Ministry of Belarus has forwarded a request to the government of the Republic, the press service which is not answered. 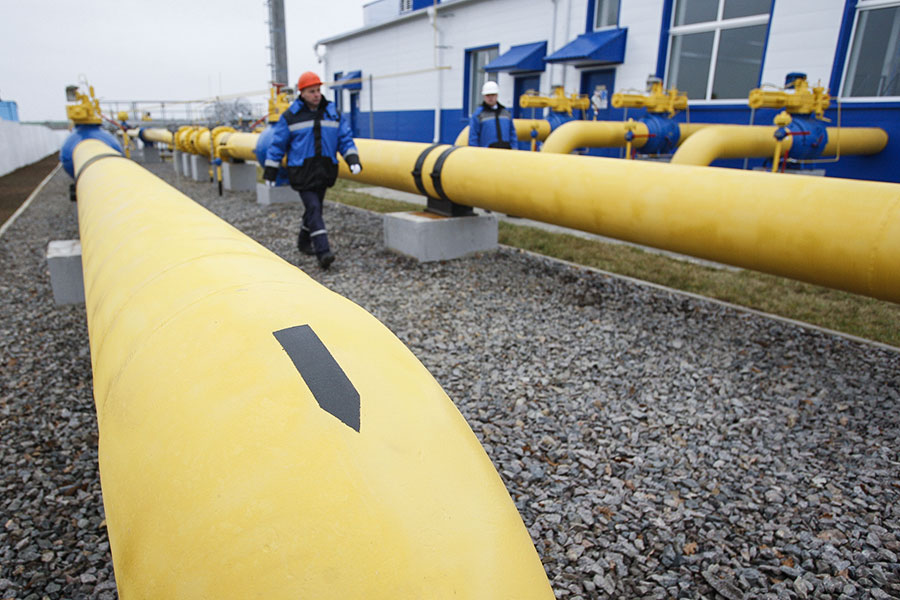 Deputy Prime Minister Arkady Dvorkovich on 3 April at a press conference said that Belarus should pay “Gazprom transgaz Belarus” — “daughter” of “Gazprom” a debt in $726 million and this commitment is linked with the resumption of duty-free oil supplies in full at the rate of 24 million tonnes per year (in the fall of 2016 because of the failure of Belarus pay the debt for gas deliveries of Russian oil were reduced by 25 per cent to 18 million tonnes per year).

Russia will supply annually to 24 million t of oil until 2024, said Belarusian Deputy Prime Minister Vladimir Semashko on air of TV channel “Belarus 1”. In this case, before the end of 2019 from 24 million tonnes to 18 million will be delivered to Belarusian oil refineries, and 6 million tonnes “perenosyatsya”, Semashko said, without providing details of the scheme, but putting that import duties from “Peremogi” will be credited to the budget of Belarus. To export the 6 million tons of oil will be Russian companies in their chosen areas, not necessarily in Belarus and export duties for export of this oil will go to the Belarusian budget, explained the Russian Federal official.

In addition, the crew removed the obligation to deliver to Russia 1 million tons of petroleum products a year (it was mostly high-octane gasoline), which has been profitable for Belarusian oil refineries. Cancellation of such supplies will allow Belarus to save $150 million a year, according to BelTA, the total economic impact of the achieved oil agreements was estimated for the economy of Belarus $2.1 billion over three years, said Semashko. Previously wrote that the volume of hidden subsidies for Belarus on the Russian energy supplies totaled $100 billion since the beginning of 2000-ies.

Russian Deputy Prime Minister Dvorkovich said that “Gazprom” from 2018 to the end of 2019 will provide Belarus a discount in the form of the reduction coefficient to the price formula for gas. The Deputy Prime Minister is called the discount, explaining that to disclose these data do not allow corporate standards.

Press Secretary of the Chairman of the Board of “Gazprom” Sergei Kupriyanov not responded to the request . In 2016, the average import price of Russian gas for Belarus amounted to $136,6 1 thousand cubic meters, but the whole year Minsk was negotiating to lower the price paid for gas on the basis of its own calculations, which gave a “fair” price of $73-83 per 1 thousand cubic meters the price difference associated with the interpretation of the prisoner in November 2011 the intergovernmental agreement on the formation of gas prices.

The debt is not recognized?

The press Secretary of the Ministry of energy of Russia Olga Golant, press Secretary of the government of Belarus Vladislav Sytsevich declined to comment on details of the negotiations. In particular, they did not answer the question whether to recognize Belarus’s gas debt, the amount of which was voiced by Dvorkovich, who has to pay and what the price of gas Belarus considers fair according to the results of the negotiations. But a source in the energy Ministry of Belarus said that Minsk has not recognized the debt for Russian gas deliveries and is not going to pay even after talks between the two presidents. According to him, is still to be determined the fair price of Gazprom gas for 2016 and 2017 — it’s to be determined during further negotiations. And only after that we can talk about some benefits.

The interviewee said that the main consumer of Russian gas are the Belarusian state enterprise “Beltopenergo” and he owned seven regional subsidiaries (the representative “Beltopenergo” asked to send to the company a written request, refusing to comment on the situation on the phone). Belarus, according to officials, insisted on the fulfillment of intergovernmental agreements on the basis of which fair recognised either the Russian domestic gas price for the Yamal (wholesale price to consumers except for the population), converted into dollars at the exchange rate of the Central Bank of Russia, plus transportation with the cost of “Gazprom” in the purchase of Belarusian infrastructure (50% of “Beltransgaz”, modernization of the transmission system), or the “market” (market) price. Under the latter, the Belarusian side understands the average European price minus export duty, said earlier in an interview with Russian energy Minister Alexander Novak (for example, the price calculated from the prices of Russian gas at the German border, less export duties and the cost of transit via Poland and Belarus).

According to the formula specified in the intergovernmental agreement (“Yamal plus transportation and costs” taking into account dollar inflation), the price of gas for Belarus in 2017 should be $141,1 per 1 thousand cubic meters, reported in March, citing a letter to the top Manager of “Gazprom”. But the Belarusian side claims mentioned in that letter that the intergovernmental agreement with Russia gas price for Belarus in 2015 should not exceed the level of market prices. The latter is determined “by deducting from the sales price of gas on the foreign market duties, fees, taxes, other charges, and also transportation cost of gas outside” of Russia. On this basis, and given the resolution of the Russian government on the settlement price of gas sold outside the CIS from February 2015 the fair price for Belarus can be considered price $80 for 1 thousand cubic meters. m, calculated for the Director of East European Gas Analysis Michael Korchemkin.

In this companion to the Russian energy Ministry claims that the Belarusian side agreed to pay debts of more than $700 million in exchange for discounts on gas and a further agreement on common oil and gas market.

In October 2016, Russia and Belarus have announced the achievement of agreements on gas and the payment of the debt to “Gazprom” (Lukashenko spoke about the dispute with Russia on oil and gas supplies, Deputy Prime Minister Semashko argued that the parties agreed to reduce the cost of Russian gas price for Belarus and selected the “trajectory of decline rates” in subsequent years), but Russian Prime Minister Dmitry Medvedev later said that the discount on gas for Belarus is not provided, and the price is calculated according to the existing formula.

The Rosselkhoznadzor returned to Belarus

Putin and Lukashenko on 3 April, also discussed the issues of agriculture, where the parties have accumulated to each other a lot of claims. A few days before the meeting of the leaders of the Minister of agriculture of Russia Alexander Tkachev said that Belarus has become a “transit point”, or “back door” through which the country get sanctions products. Before that, in early February, Russia has restricted the export of beef and beef offal from Minsk region. The head of the Rosselkhoznadzor Sergey Dankvert explained by the fact that the producers used the Ukrainian raw materials. In turn, Lukashenka instructed the head of the Ministry of interior to initiate a criminal case against Dankvert, alleging that “damage to the state.”

“I have asked the Russian government for this week, our experts have traveled to Belarus and worked there with colleagues on the relevant workplace in respect of which any doubt with respect to our phytosanitary standards”, — said Vladimir Putin at the meeting in Strelna.

Rosselkhoznadzor specialists will visit Belarus on Wednesday, 5 April, told the official representative of Department Julia Melano. “Now make a list of enterprises for inspection, we agreed with the Belarusian side,” — she added, not specifying what kind of company can enter. Previously, the Rosselkhoznadzor expressed doubts about the origin of meat supplied by the companies JV “George and sons”, Lelchitsky raypo swaps “Manufacturing plant”, LLC “Unexampled and Terramet”.

The visit of the Rosselkhoznadzor and Belarus will be the first from the beginning of 2017. In early February, against the background of harsh statements by the Belarusian President on postponed a planned trip to the Republic because of fears of “provocation”.

With the participation of Anton Feinberg, Anna Mogilev