Thursday, April 6, Western leaders continued to blame Syrian President Bashar al-Assad and support his forces use chemical weapons against the civilian population in Idlib province. German Chancellor Angela Merkel called it a “scandal” that the UN Security Council has still not adopted a resolution on the “barbaric” attack in Syria, the responsibility for which, in her opinion, lies with government forces in Syria. Merkel joined leaders demanded an international investigation.

The incident that triggered another round of crisis on the Syrian issue between Russia and the West, occurred on Tuesday, April 4: the town of Khan Shaykhun the southern Syrian province of Idlib was subjected to chemical contamination. According located in London, the Syrian monitoring centre for human rights (SOHR), the death toll in the incident, which the SOHR calls “the attack”, the evening of 6 April was 86 people, among them 30 children and 20 women. The TV channel Al Jazeera and the Turkish news Agency Anadolu quoted other victims — more than 100 dead and 500 wounded.

Syrian authorities on Thursday continued to deny involvement in the incident. Deputy Prime Minister and Minister of foreign Affairs of Syria Walid Muallem at a press conference in the Syrian capital said that his country’s troops have never used and will not use chemical arms “not only against civilians but against terrorists.” He also stressed that Syria is clearly in compliance with its obligations under the Convention on the prohibition of chemical weapons, which the country joined in 2013. The Convention was signed by Damascus, after the UN found that the Syrian military use chemical weapons in the Eastern ghouta in August 2013.

The Syrian foreign Ministry claims that on April 4 was caused by an airstrike on a warehouse of chemical weapons to terrorist organization “al-Nusra Front (Jabhat Fatah al-sham”, banned in Russia). This coincides with presented 5 APR version, the Russian defense Ministry, according to which the Syrian air force attacked a warehouse of the terrorists in the territory of which “there were workshops for the manufacture of bombs, stuffed with poisonous substances.”

Muallem also said that reports of a chemical attack in Khan Sheyhun came in at 6:00, while the first airstrike by the Syrian air force was dealt at 11:00. According to the diplomat, the opposition went to the re-enactment of the attack and spread false information, after talks in Geneva failed to seek power in Syria.

The Ministry of health of Turkey said on Thursday that an initial autopsy of the bodies of the three victims, who were taken from Idlib in the Turkish Adana, suggests that the victims were exposed to sarin. Samples will be submitted for study to the representatives of the Organization for the prohibition of chemical weapons (OPCW). Thirty-two wounded Syrian was taken to a medical institution in southern Turkey, three of them died in hospital.

Commenting on the attack in Idlib, the President of the United States Donald trump abruptly changed the rhetoric on the Syrian issue, placing the responsibility for the civilian deaths on the forces of Syrian President Bashar al-Assad. Trump said that what happened in Idlib “has crossed the red line” and now the resolution of the Syrian conflict will become his responsibility.

Trump has warned it will not tolerate the holding of such a “monstrous” attack on the civilian population, and stressed that the United States will strengthen its role in the protection of civilians in Syria, although earlier it was believed that America should avoid intervening in the Syrian conflict. He also added that his attitude towards Bashar al-Assad has changed a lot, but did not specify whether it will become a pretext for military intervention in Syria. The President refused to provide any details about possible retaliatory actions of the United States, it is also not clear whether the country to accept Syrian refugees, writes The Washington Post.

At an emergency meeting of the UN Security Council on Wednesday, April 5, the U.S. permanent representative to the UN, Nikki Haley warned that the U.S. might take unilateral action if the UN security Council did not give a response to “atrocities” in Syria. The shift in policy may include air strikes, the use of which is in Syria at the time, Obama refused, writes The New York Times. On Thursday, a source in Congress told CNN on condition of anonymity that trump is considering military action against Syria. 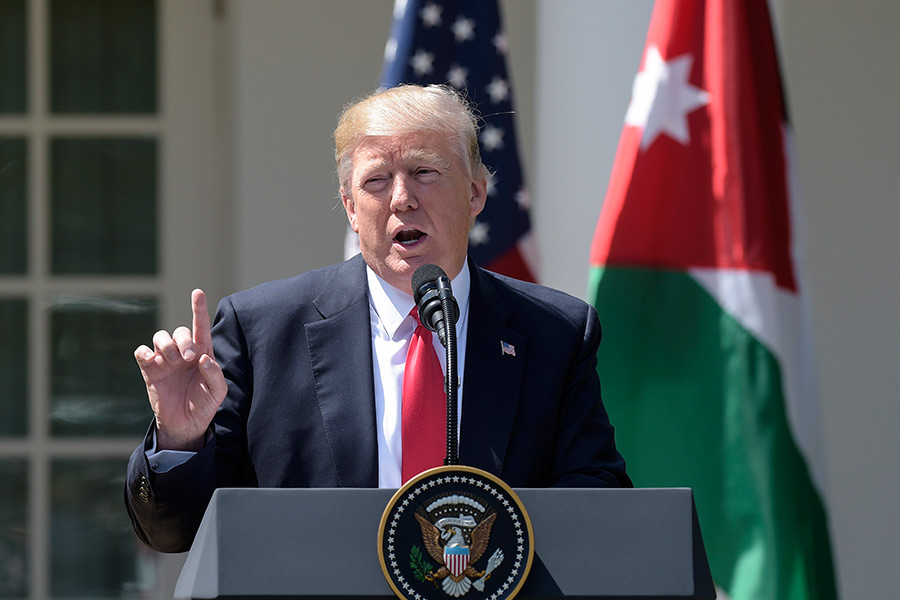 During his election campaign, trump has repeatedly stated that he will not seek the overthrow of the regime of Bashar al-Assad. In an interview with MSNBC in may 2016, trump said that the US has bigger problems to deal with Assad: “I could’ve done without Syria wouldn’t fight so much either for Assad or against him,” he added. He also criticized the candidate in presidents from Democratic party Hillary Clinton and Barack Obama because they insisted on “immediate regime change in Syria.” On Tuesday, right after the chemical attack, trump stressed that Obama effort for the removal of Assad from power was not enough.

One of the options the US could be the increase in the number of the US army in the region, said the expert of the Russian Council on international Affairs Maxim Suchkov. At the moment in Iraq and Syria there are about 6 thousand American soldiers who work as advisors and “carry out special operations”, reminds the expert.

The Pentagon is considering sending an additional contingent of 12 thousand people to capture the “capital” of ISIS (a terrorist organization banned in Russia) Raqqa, but will such a measure trump, is unclear, since she likely be unpopular in the United States, says Suchkov.

The alternative to this plan is changing the functions of existing us forces together with Iraqi forces, they will have to take part in ground operations, specifies Knots. Another option — increase support to the Kurds, who have established themselves as an efficient unit against the forces of ISIS, and the Americans have all the reasons to continue to help them, said Knots. Finally, another considering the us military option is the introduction of so-called security zones. About the possibility of establishing such zones, said trump and U.S. Secretary of state Rex Tillerson.

However, experts say, the proposal had met with stiff resistance in the Kremlin: Moscow proposed to Washington “to think carefully about the consequences”, seeing in “security zones,” a euphemism for “no-fly zones”. If the “security zone” will be applied to areas of combat actions of the Syrian army, the Russian aviation will be forced either to abandon flying over these “zones” or risk being shot down (those who make these “zones” will control), which will lead to unpredictable consequences, says Suchkov.

Trump won’t take drastic steps on the Syrian issue before the meeting with Vladimir Putin, however, if the guilt of the Syrian regime will be able to prove, that Russia will have to force Assad to resign and to support the new interim government, says major General US army retired half Vallely, expert discussion club “Valdai”.

After a chemical attack in Idlib all the possibilities of cooperation between Russia and the USA on the Syrian issue in preserving Assad in power disappeared, said the Director of the Center for political-military analysis at the Hudson Institute, expert of the discussion club “Valdai” Richard Weitz. “Until recently, it seemed that trump is ready to recognize the legitimacy of the Assad government and to work with Russia to eliminate terrorist forces in Syria,” — the expert specifies. But a chemical attack in Khan Sheyhun not left the Trump choice, which makes it impossible to cooperate with Assad, says Weitz.

The President of Russia on Thursday discussed the Syrian situation with the Prime Minister of Israel Benjamin Netanyahu. In the conversation, Putin stated the need for an international investigation of the incident. Press Secretary of the President Dmitry Peskov told journalists that the disagreement between Moscow and Washington on Syria is a constant companion of Russian-American relations, therefore, significant differences in Idlib unlikely to radically change the spirit of the relationship.

​Another attempt of the security Council

6 APR Russia in the UN Security Council proposed a draft resolution on the attack in Idlib. Project consultations, reported the press Secretary of the Russian mission to the UN, Fedor Strzygowski. The earlier draft prepared by the United States, France and great Britain Moscow has criticized, calling it “anti-Syrian”. It is obviously the responsibility was assigned to Damascus, explained the position of Moscow, the official representative of the foreign Ministry Maria Zakharova. On 5 April convened an emergency meeting of the UN security Council ended in a no contest: the vote on the resolution did not take place because the parties have not come to a consensus. The Russian draft also failed, reported TASS citing a source in the UN on the evening of 6 April.

The absence of evidence from the UN and the Organization for the prohibition of chemical weapons in the Commission of attacks from the air reported on Wednesday, April 5, at the meeting of the UN security Council, the UN representative for disarmament, Kim Won-soo. Representatives of the two organizations still have not arrived at the place of incident for investigation. However, Won-soo assured that experts from the OPCW mission to establish facts of using chemicals as weapons, as well as the joint UN and OPCW to investigate chemical attacks in Syria has begun to gather information to clarify the circumstances of the incident.