Russian officials have nothing to answer charges from the Fund of struggle against corruption Alexei Navalny, the Prime Minister Dmitry Medvedev. Therefore, the policy of “pretend nothing happened”. This opinion is shared by 38% of respondents sociologists “Levada-Center”. The study was conducted from March 31 to April 3 among 1.6 thousand people in 48 regions of the country.

19% of respondents said that the government should not make excuses and “drop your credibility” and that officials did not consider it necessary to answer “the absurd accusations of the people who discredited political demagoguery and criminal offences”. Almost a quarter of respondents were undecided.

“You do not Dimon”

On March 2, the Fund of struggle against corruption published an investigation and film about the residences of Prime Minister Dmitry Medvedev and the related funds, which received 70 billion rubles in donations. March 26 in Moscow and in dozens of big cities of Russia held rallies in which the participants demanded the authorities reaction to the material of the FBC. The largest was a rally in Moscow, the results of which have been detained more than thousand participants.

Medvedev responded to the investigation a month later and called it “compote” and “turbidity”. In the state Duma has not supported the initiative of the Communists with the requirement to verify the facts of the FBC.

In 2014, the citizens felt a sense that Russia is a besieged fortress, now this view is blurred, the Vice-President of “Center of political technologies” Alexey Makarkin. “When you are in a besieged fortress, you can’t criticize it of the commandant. And the one who shouts that the commandant in the basement with wine and cheese and have to deal with it, is an enemy agent,” — says the analyst.

Today, according to Makarkin, the society was divided in half: one half still considers that it is impossible to lay claim to power, the other refers to the power is difficult. A considerable portion of these 38% are among those 82% who approve of the President, said Makarkin. “That is the king to touch still impossible, and the boyars is already possible”, — concluded the analyst.

The failure of counter-propaganda

The film FBK saw approximately familiar with its contents or heard something about it 38% of the respondents. Others don’t know about the investigation of the Fund. These figures indicate that the state-propaganda have achieved the opposite effect, and opposition leader Alexei Navalny became a politician at the Federal level, said the head of “Political expert group” Konstantin Kalachev.

“Citation increased those critics Navalny, who started the excuses. The first reaction was the correct one, silence. Engaging in a discussion, to quote, just mention you are grist to the mill opponent. After all, all publicity except an obituary. Medvedev himself for a long time was silent, but after the meetings to silence the already failed”, — concludes the analyst. 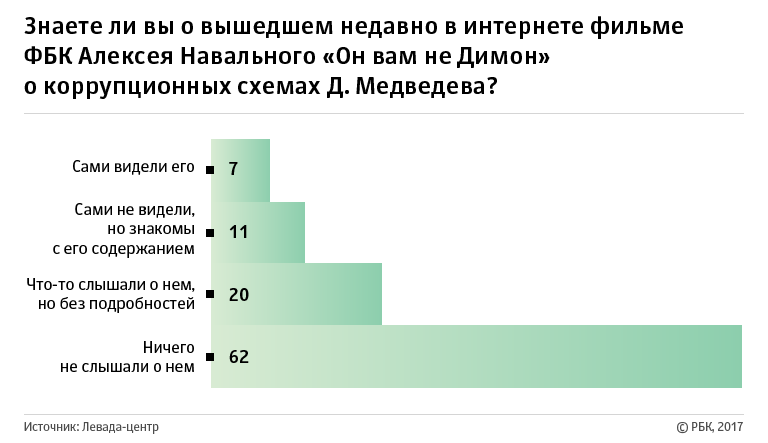 The vast majority of those who know about the film FBK, I believe that is mentioned in the investigation of corruption schemes is either true, or very like her. Only 16% believe that the publication of Navalny is not true. But three-quarters of those who watched the movie and believed Navalny, called what he saw “is a typical phenomenon, a manifestation of the expansion of the Russian authorities”. 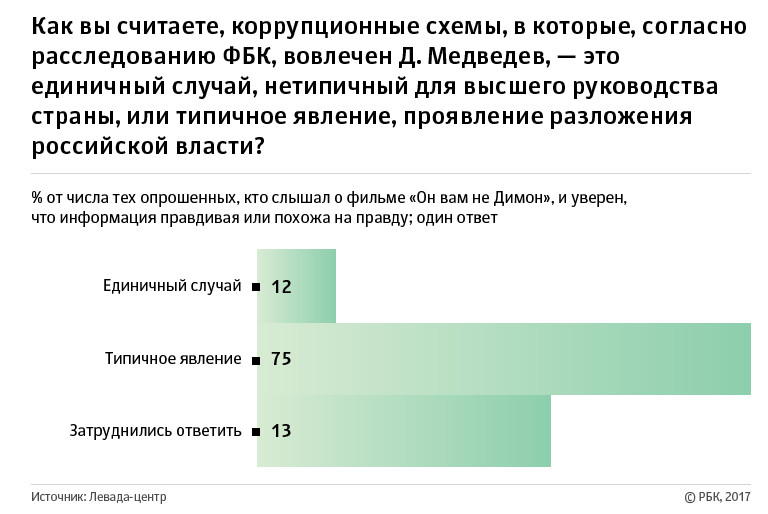 “Perceptions of corruption in the leadership of the country, there are enough long and already rooted in the society,” — said the sociologist “Levada-Center” Stepan Goncharov. He noted that the Fund Navalny just updated the theme, so the people went out on March 26.

Similar figures were at the end of December 2015 after the publication of the Bulk of the investigation on business of the Empire of the sons of the Prosecutor General Yuri Chaika. Then about the film FBK heard 38% of respondents sociologists, 78% of this share either found seen the truth, or not discovered anything new. Among those who considered the investigation most likely, 82% of the respondents described the corruption scheme and links with criminal groups is a typical phenomenon.