On the night of 6 to 7 April, two us destroyers USS Porter and USS Ross, assigned to the Sixth fleet (Atlantic fleet), struck with cruise missiles “Tomahawk” at the shayrat airbase, located in the province of HOMS. According to the Pentagon, published after the strike, us missiles were aimed at aircraft fuel stations and other infrastructure located at the airport.

With the Sirat, according to the U.S. military, flew the aircraft that dropped chemical weapons on the town of Khan Shaykhun. The result of the chemical attack were killed, from 72 to 100 people, among them there are children.

According to the independent Syrian monitoring center for human rights (SOHR), in the course of a U.S. attack killed seven soldiers. Among the victims were the Colonel of the Syrian army, who commanded a brigade of air defense. Also, says the correspondent of the Syrian state news Agency SANA, in the settlements of al-Hamrat shayrat and killed nine civilians, among them four children, and another seven people were injured.

The RAID, according to the American military, destroyed 20 Syrian aircraft. The TV channel “Russia-24” with reference to the correspondent on the spot reports about the nine destroyed cars. Correspondent for Al-Jazeera said that as a result of the impact destroyed 14 fighters “Dry”, the control tower, destroyed runway of the airport.

Some military equipment was saved from the strike by cruise missiles, as the Syrian leadership had information about the planned attack, said a source in the Syrian army. He stressed that the technique was transferred to the base T-4, located West of Palmyra. In addition, the source confirmed that on the basis of the Shirt at the moment of impact were the Russian military. “The information on victims among Russians are not received,” — said the military. At the moment, according to him, destroyed four fighter and three helicopters of the Syrian army.

Destroyers of the “Arleigh Burke”, which include the USS Porter and USS Ross, can carry up to 60 cruise missiles “Tomahawk” at the same time. According to the Pentagon, on the night of 6 to 7 April, American ships fired 59 cruise missiles at Syrian airbase. “Currently the region has five or six ships of the U.S. Sixth fleet, which can use such missiles,” says independent military analyst Anton Lavrov.

The Russian defense Ministry have already assessed the impact of U.S. missiles as ineffective. “According to the Russian means of objective control, to the Syrian air base flew only 23 rockets. The place of fall of the remaining 36 cruise missiles is unknown,” — said the official representative of the Ministry of defense of Russia Igor Konashenkov at a briefing on Friday morning.

This is an extremely low level of implementation for these missiles, the Deputy Director of the Institute of political and military analysis Alexander Khramchikhin. According to him, it is unclear where he could get 36 missiles and who they could knock down.

The statement of the Russian defense Ministry denied the Pentagon. According to the American military, from 59 58 rockets reached its target, one missile didn’t work.

Cruise missiles of this type are used by the American army since 1991. During the Gulf war, the US army has launched such missiles, 297, 282 has reached its goal. During operation “desert Fox” against Iraq in 1998 was released 370 Tomahawk missiles in Libya — 200. Every year, the U.S. army, according to the manufacturers, gets 440 such cruise missiles. 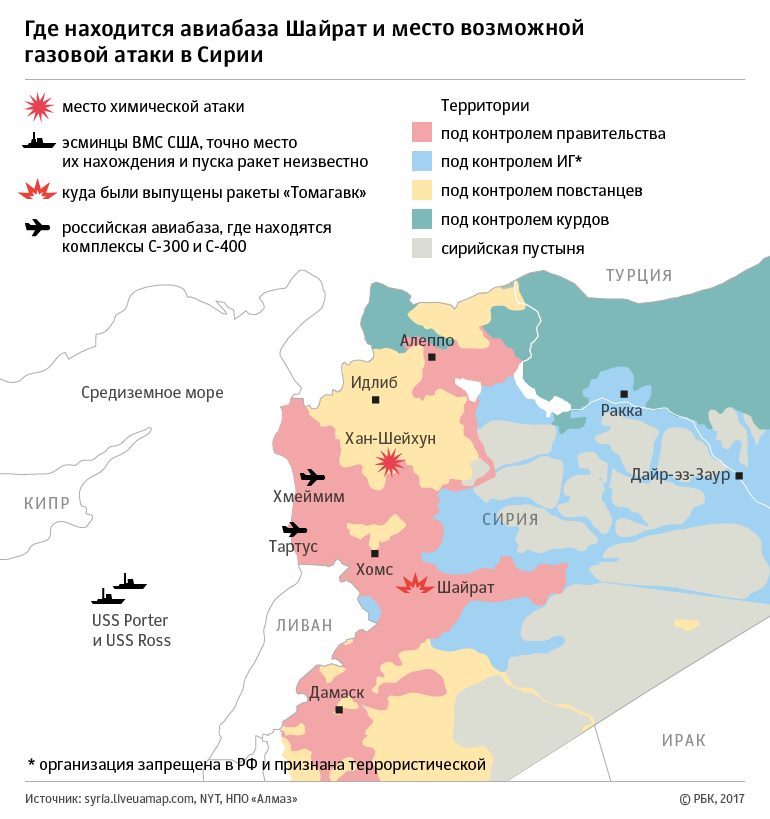 Why not worked air defenses

After the Russian operation in Syria in October 2015, the defense Ministry has placed on the territory of the Republic anti-aircraft missile complexes (ZRK) With-300 and With-400, moreover, was the coast guard “Bastion” and missile system “Carapace-C1”, covering SAM. According to the press Secretary of Russian President Dmitry Peskov, the missiles were sent to Syria to protect Russian aviation. Defense Ministry spokesman Konashenkov noted that the operating range of the s-300 and s-400, deployed in the region, “could be the surprise for any unidentified flying objects”.

The interviewed experts disagree on why Russian troops shot down an American missile.

“The Russian military could not notice the us missiles,” — said independent analyst Anton Lavrov, on a regular basis cooperating with the defence Ministry and the Center for analysis of strategies and technologies. But detection of cruise missiles does not guarantee reflect the impact, says the expert: “every complex has a saturation limit (the maximum number of objects that the complex can affect one ammunition. — ). Even if we released all of the s-300 missiles “Tomahawk”, to reflect their attack failed.”

Cruise missiles “Tomahawk”, using the tracking system TERCOM terrain, can fly at an altitude of 100 m, says the military expert, retired Colonel Andrew Pautov. “Anti-aircraft missile battalions of s-300 missile at a height just can’t see” — sums up the expert. He argues that this requires a separate mobile radar system.

To respond to the use of such missiles could have a short-range complexes “Strela-10”, but on the basis of the Shirt was not, emphasizes Payusov. In addition, the s-300 and s-400, said Payusov were too far from the airfield shirt, and even getting information about cruise missiles could not hit them at this distance. According to the specifications, the latest modification of missile complexes s-300 and s-400 can shoot down as ballistic and maneuvering high-altitude targets at a distance of from 5 to 400 km In the case of cruise missiles “Tomahawk” range in their midcourse is for flat terrain for about 45 miles, explained the military expert. The exact location of the launch of U.S. missiles in the Mediterranean sea is unknown.

Do not agree with the expert Alexander Khramchikhin. If missiles closer to the Russian s-300 and s-400 at a distance of defeat, they would be shot down, says military analyst. “Rocket not a plane, no pilot. So shot down by a missile could not be the reason for the escalation of the conflict”, — stressed the expert. He also points out that the Russian military has the coast guard complexes “Bastion”, which theoretically could hit American ships on the way. “But it’s politically impossible, it is a fact of direct aggression, which would lead to serious consequences, world war II” — sums up the expert. “At the same time, surprisingly, Russia and Syria have not signed the Treaty on mutual defense,” — recalls the expert.

According to the Pentagon spokesman, Navy captain Jeff Davis, the us military has warned Russian colleagues immediately before impact. Press Secretary of Russian President Dmitry Peskov did not comment to journalists ‘ question about why the Russian missile interception system was not applied.

How the United States responded to threats to its interests

The prospects of expanding operations

“Today I call on all civilized Nations to join us in the quest to end the bloodshed in Syria and to put an end to terrorism of all kinds and all types,” said the President of the United States after the damage caused by cruise missiles strike.

The actions of the us military is already supported by the representatives of Israel, the UK, Japan, Saudi Arabia, Turkey and other countries. Condemned the actions of the United States Iran, China and Russia. Turkey, which is together with Russia the guarantor of the truce in Syria, according to the statement of US President Donald trump, can support a military operation of Americans in Syria, “if this happens”.

The Turkish army on March 29 ended a large-scale operation “shield of the Euphrates” in Syria. The operation, which lasted more than seven months, allowed to the Turkish side and the opposition groups to take control of more than 2 thousand sq. km and 230 settlements in the North of Syria. Participated in the operation from 4 thousand to 8 thousand Turkish soldiers and 10 soldiers of the rebel groups.

Another regional power, which has repeatedly attacked the Syrian government-controlled territory, is Israel. According to the report, Military Balance 2016 the International Institute for strategic studies (IISS), the Israeli army can take advantage of 440 aircraft. In addition, the weapons Israel also has cruise missiles of its own production of Delilah. The maximum range of such missiles is up to 250 km. “the Israeli forces have previously attacked Syria with cruise missiles and combat drones,” Lavrov recalls.

Israeli attack on Syrian territory is fully agreed upon by the Jerusalem — Moscow, said the lecturer at the Department of political science of Bar-Ilan University Zeev Khanin. In his opinion, calls trump does not lead to an increase or decrease in the number of Israeli military strikes on Syrian territory. “Israel continues to use weapons against terrorist groups such as Hizbollah, ad hoc, for the occasion,” — said Khanin.