U.S. authorities believe that Russia was aware of the plans of the Syrian army to carry out a chemical attack in the village of Khan shaykhun in Idlib province. It is reported Associated Press, citing an unnamed U.S. official.

According to him, in the Pentagon believe that the proof can serve as the appearance in the district hospital, where he was taken victim of a chemical attack, a Russian drone. A few hours after the drone left the area, the hospital was caused by an airstrike. This, according to us officials, was an attempt to hide the use of chemical weapons. Thus the interlocutor of the Agency stressed that the air strike caused “jet aircraft of the Russian production”. However, where the aircraft of the Syrian air force or the Russian VKS, is not yet established.

As noted by the source AP, the Pentagon excludes the possibility that this could all be a coincidence. The American military believe that these facts are proof that Russia was aware of the chemical attack and involved in attempt to conceal. The Agency notes that the source refused to disclose all the details of the investigation. In particular, he did not mention the time when he was spotted by a drone.

At the same time another source, the Associated Press said that Washington is not yet ready to officially declare the Russian involvement in the chemical attack. The Agency notes that such charges can have serious consequences. Earlier, the US didn’t bring charges of involvement in the alleged chemical attacks, which, according to Washington, produced the Syrian authorities.

That the U.S. government began investigating about the possible involvement of Moscow to the chemical attack in Idlib province, the Associated Press reported on 7 April. Thus then the source Agency could not clearly state who belonged to the noted American military drone, Russia or Syria.

A chemical attack in the village of Khan shaykhun, Idlib province took place on 4 April. The number of victims of chemical contamination was at least 80 people. According to the channel Al Jazeera and the Turkish news Agency Anadolu, the death toll has exceeded 100 people, and about 500 people were injured. A number of Western countries blamed the attack Damascus, but the Syrian authorities deny involvement in the incident. According to the Russian Ministry of defense, Syrian air force attacked a large warehouse of ammunition, where stored chemical weapons by the militants.

In the gas sector: what is known about the chemical attack in Syria

On April 7, the U.S. army launched a missile attack on the airbase Shirt, which, according to the Pentagon, was carried out a chemical attack. The decree on the strike was given by the President of the United States Donald trump. The White house said that in the case of repeated use of chemical weapons, the United States can once again strike on Syria.

Sunday, April 9, The Sunday Times reported that the US and Britain are ready to directly accuse Russia of complicity in war crimes in Syria and to demand from President Vladimir Putin to stop supporting the “bloody regime” of Assad. According to the newspaper, U.S. Secretary Rex Tillerson during his visit to Moscow, 12 APR present proof that Russia knows about the use by the Syrian authorities against the residents of Khan shaykhun sarin — a chemical agent nerve agents banned by international conventions, and trying to hide this fact.

The phantom menace: why Russia is not protecting Syria from a missile strike 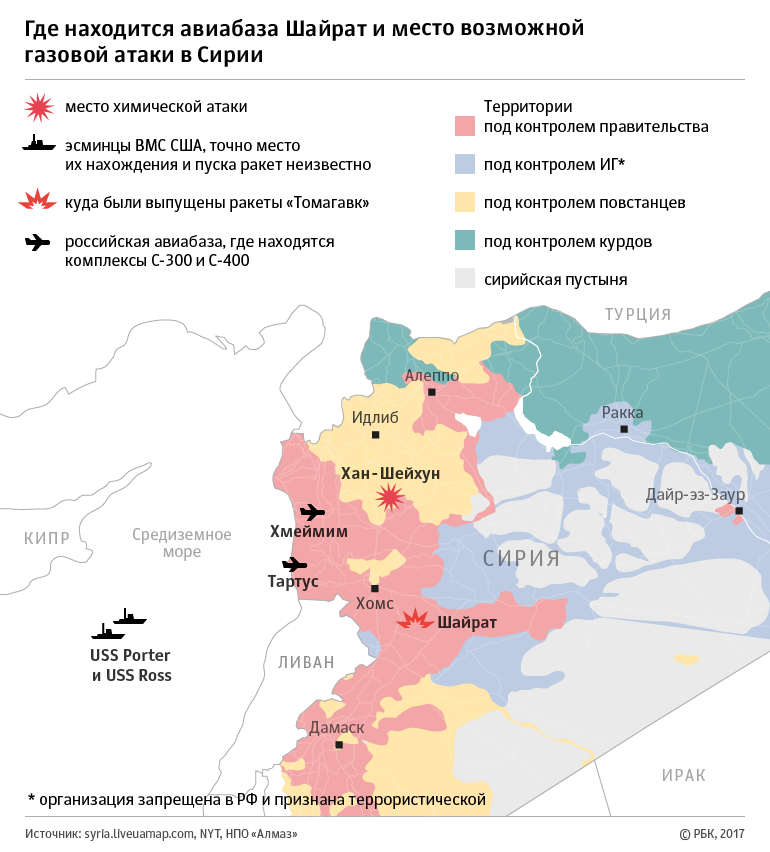