The richest Kremlin official in 2016 became the first Deputy head of presidential administration Sergey Kirienko, to the declarations published on the Kremlin website. He earned 85.5 million RUB Until the fall of last year, he worked in the state Corporation “Rosatom”, where in 2015 as the head of the company he earned 49.2 million rubles. In Kiriyenko house area sq. m. 698,5 Predecessor Kiriyenko in AP, Vyacheslav Volodin, who became the speaker of the state Duma, last year was also the richest in administration of the head of the state: then he declared 87,1 mln. the richest family in the Kremlin — the press Secretary of the President Dmitry Peskov and his wife Tatiana Navka. Between them, they earned 133,6 mln., and the income Navka ten times more than her husband. In property they have seven apartments (a total area of 773 sq m) and two houses (1905,8 sq m).

The highest personal income of the members of the Russian government in 2016, the Minister for North Caucasus Affairs Lev Kuznetsov, according to the Declaration, published on the website of the Cabinet. For 2016, he earned 582,1 million rubles — 12 times more than the year before. Together with his wife, his income amounted to RUB Kuznetsov 614,9 million increased income from “contributions and real estate transactions, which was declared earlier”, reported the press service of the Minkowksi. Kuznetsov owns 10 plots of land in Russia, ranging from 958 to 1553 sq meters and one house (563,6 sq. m), are all in individual ownership. Another plot (3385 m) which is situated in France, the Minister has the right of joint ownership, the same form of tenure and a house in France with an area of 180 sq. m. in addition, Kuznetsov personally owns an apartment in France (109,3 m), four garages (three of them in France). In the fleet Kuznetsov — Mercedes-Benz A200, BMW M5 and a Ferrari 599 GTB.

If the Pastor is the wealthy wife of the Kremlin among families, that the richest wife in government was the wife of first Deputy Prime Minister Igor Shuvalov Olga with income 61.1 million rubles, which, however, still 10.6 million rubles. less than the Shuvalov.

The income of members of the government about three times higher than officials of the Kremlin: in 2016, they earned almost 3 billion rubles and 1.1 billion rubles, respectively, calculated . And if the total income of the presidential administration during the year has not changed, then the White house began to earn significantly more: in 2015, total revenue amounted to 2 billion rubles, and in 2014 to 1.6 billion rubles. 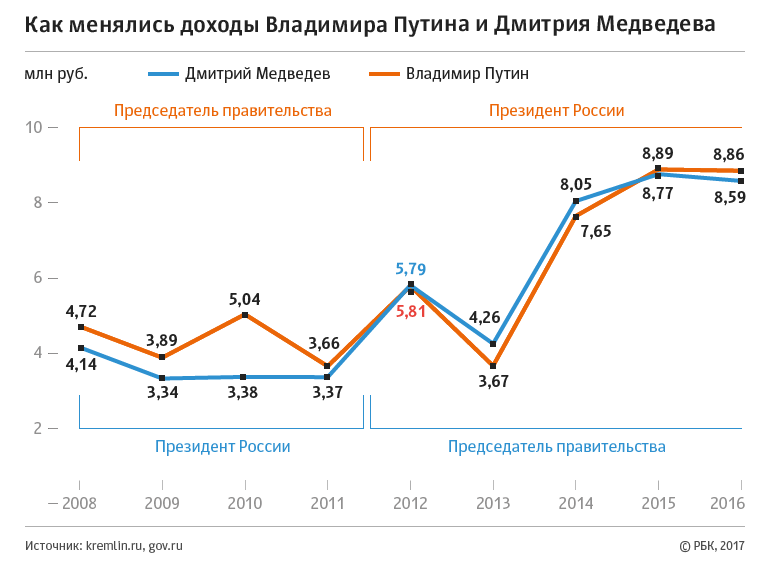 The second place by revenue in the Cabinet of Ministers was taken by the Minister for open government Mikhail Abyzov (last year he headed a rating of the richest members of the government). His earnings he built up with 455,6 mln RUB mln RUB. prior 520,9 Abyzov owns four apartments in Russia and rents in Italy “other real property in a country house”. In his ownership the car Mercedes Benz S500 4MATIC MAYBACH and Mercedes Benz AMG G63, Harley — Davidson FLSTN, Ducati Diavel, Yamaha YZF-R1, Ducati 1199 Panigaler and a helicopter Robinson 44 Clipper II snowmobile Yamaha SXV 70VT and two trailers.

Third, among the members of the Cabinet in revenues was the Deputy Prime Minister and presidential Plenipotentiary envoy to the far East Yuri Trutnev with earnings in 356,9 million RUB Property in Trutnev only in Russia: a plot of land, two houses and three residential areas, all of them are in joint ownership with his wife. Trutnev together with his wife owns a BMW X6 М50D, Porsche Cayenne Turbo, Mercedes Benz ML 350 4 Matic, Nissan Patrol.

The most modest income the Minister of agriculture Alexander Tkachev, who earned last year to 5.6 mln. Is almost nine times less of its income a year earlier (RUB 50.4 million). “Income in 2015 was higher because Alexander Tkachev in the same year received an inheritance in connection with the death of his father,” — said the representative of the Minister.

The security Council and the Kremlin

Among the heads of departments of the presidential administration of the richest was the closest ally Kirienko Sergey Novikov, who directs the office of the public projects of the Kremlin, — he earned 18.8 million rubles., and the richest family — the head of Department on public relations Alexander Smirnov — 24 million rubles-the special Representative of the President on environmental issues Sergey Ivanov earned 13.1 million RUB from his colleagues, the special envoy for developing trade and economic relations with Ukraine Dmitry Livanov income amounted to 25.4 million rubles, and together with his wife he received 35.3 mln RUB.

The head of the presidential administration Anton Vaino reported income in the amount of 9.6 million rubles, his wife — RUB 4.5 million In property they have two plots of land, two houses and two apartments. The family of the assistant to the President Vladislav Surkov income amounted to nearly RUB 16 million owned by his wife Natalia Dubovitskaya, there are six plots with an area of almost 5 hectares and two houses (1359 sq ft). The income of the head of the presidential Council on human rights Mikhail Fedotov amounted to almost 7 million rubles adviser to the President on the Internet German Klimenko has earned 4,6 million rbl. and declared 13 properties, including Laundry, dining room and cellar.

The Parliament and the presidential envoys

The richest Senator in 2016 was Valery Ponomarev, the representative of the Kamchatka Peninsula, his income amounted to 2.6 billion rubles the year before that he earned 1 billion rubles Spouse Ponomarev declared 32.7 million rubles of net income. In second place for earnings in the Federation Council Senator from the Tambov region Alexander Babakov who in 2016 has earned 318 million rubles, in 2013, he became involved in the investigation of Alexei Navalny, when he found his estate with an area of 10.9 hectares in France. In 2012, according to the Declaration, earned only 2 million rubles.

On the third place by revenue last year among the senators — the representative from the Kursk region Vitaly Bogdanov, the annual income of which amounted to 222,9 million rubles In fourth place — another Senator from Kamchatka Boris Nevzorov, who earned of 173.7 million rubles to The poorest in the Federation Council became the Senator from Karachay-Cherkessia Raul Arashukov that in 2016, earned 1.6 million rubles.

Among the Plenipotentiary representatives of the President in addition to Trutnev most earned Arthur Ants (the Plenipotentiary in the Federation Council) – 33.3 million RUB From his wife specified income of 3 million rubles owned by a married couple three plots, three apartments, two garages and a house. Next comes Vladimir Ustinov of the southern Federal district — RUB 11 million with his wife he owned seven plots, four houses, two garages, apartment and Parking. He also declared an entire fleet of vehicles — Mercedes-Benz S 500, Range Rover Sport, motorcycle Java-350, and his wife has a Chrysler PT Cruiser.