On Friday, April 14 was the deadline for adoption by the creditors of the Bank “Peresvet” decision to participate in the rescue of a credit institution. According to information from sources familiar with the situation in the Bank, consent to conversion of their claims against the Bank into long-term subordinated debt (or, at the option of the Bank, subsequently in its shares) received from the holders of more than 70% of the Bank’s debt to creditors. As previously reported , this condition put forward by the Central Bank. Only upon its compliance with the regulator was ready to allocate with its part of the funds for sanitation “Peresvet” in the amount of 20-30 billion rubles. In fact, the lenders with the support of the Central Bank should hold a saving Bank under the procedure of bail-in (the conversion of short-term claims against the Bank in the long term or its shares).

On 14 April a number of major creditors have officially confirmed their consent to the conversion (Svyaz-Bank, “Opening”, Binbank) or have made the appropriate public statements. So, this day, approved his participation in the rescue of “Peresvet” group “inter RAO UES” with the claims against the Bank by 16.77 billion rubles. One of the shareholders of the Bank — “Expocentre” (42,3%) — approved the conversion is placed in the Bank funds in the subordinated bonds on March 15. The volume of funds placed in the Bank, was about 12 billion rubles.

Other lenders have refrained from any statements. The exact list with the amounts of claims against the Bank not disclosed, but among the lenders had previously recognized the “RusHydro”, Tatfondbank (license revoked), Zenit Bank, Sovcombank, Bank, investment company O1, NPF “stroycomplex”, Pulkovo airport in St. Petersburg, etc. has Not commented on Friday’s the situation, neither the Central Bank nor the DIA, nor the alleged Bank-sanator — controlled “Rosneft” all-Russian regional development Bank (RRDB).

For the first time about the unstable situation in the Bank “Peresvet”, which was part of the top 50 banks in terms of assets, said rating Agency Fitch in late September of last year. Then, the Agency has indicated that the Bank actively credits the company with no signs of real activity. These structures, the Bank has issued about 12 billion rubles, which amounted to about half of its capital.

After the statement by Fitch, the Bank has restricted the issuance of citizens ‘ deposits amount to 100 thousand rubles, or $1.5 thousand in foreign currency. 21 October 2016, the Central Bank imposed a moratorium on satisfaction of creditors “Peresvet”, the Bank appointed a temporary administration and began to assess the prospects of his rehabilitation.

In favor of the rehabilitation of the Bank said the availability of important owners. According to the Central Bank of the Russian Federation at the beginning of March, the main beneficiaries of the Bank — the Russian Orthodox Church (ROC), structures which owns 35.3% of shares of the Bank, chamber of Commerce (40%). No less important was the creditors, including large state-owned companies and banks.

At the end of 2016, “inter RAO UES”, “RusHydro” and the chamber of Commerce appealed to Prime Minister Dmitry Medvedev with a request to support the proposal on reorganization of the Bank. As the nursing home was proposed to the world Bank.

The first step to prepare for bail-in was the decision of the Bank “Peresvet” release of 15-year subordinated bonds at 125 billion rubles with the rate of 0.51% per annum. They will be converted (with the subsequent possible conversion into shares in the Bank) most of the requirements of the Bank’s major creditors (they are the ones who “Peresvet” should more than 500 million rubles.). 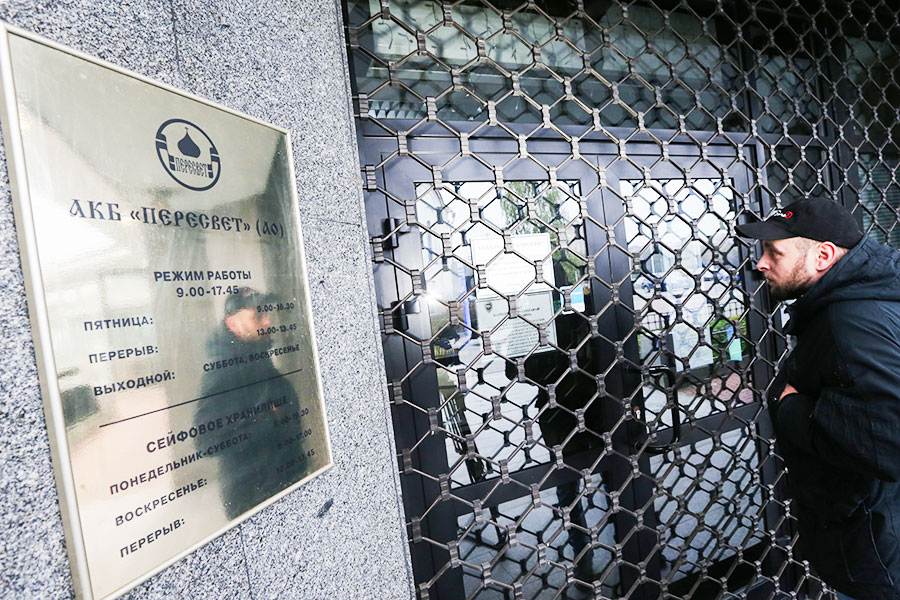 The voting results not the final step in determining the final fate of the Bank, said a source close to the Bank. Now, according to him, the decision to be taken by the regulator: it will assess the current position of the Bank and recheck the adequacy of funds from creditors to save it after receiving all the documents and only then take a final decision on the allocation of funds for sanitation.

However, this technique, indicate market participants. More importantly, how to do the turnaround “overexposure” to restore its solvency and business.

Key issues the three. The first has to do with the mechanism bail-in. Although he had previously used in Russia when sanitizing Fundservicebank and the Bank “Taurica”, the situation with the “Peresvet” is characterized by a wide range of major lenders participating in the Bank bailout. This complicates the adoption and implementation of the final decision, indicate the lawyers.

“The problem is the use of the mechanism is that the procedure is never legally required, says partner Tertychny Agabalyan Ivan tertychnyy. In such a situation, the Central Bank should clearly specify the order of signing by the lenders documents with the conditions of their participation in the rescue of the Bank. Otherwise, there may be situations when someone of the creditors at the last moment changes his mind and the whole procedure will stop”.

The second important point — whether and how quickly the “Peresvet” to recover after six months of inactivity. “This is the main issue,” says S&P analyst Roman Rybalkin. It is necessary to understand that none of the reorganized Bank was not without work for six months, he said.

The moratorium on satisfaction of creditors and the interim administration of the Central Bank was introduced in the “Peresvet” 21 Oct. Since then, the business of the Bank was frozen. “During this time, the company which served in the Bank, could find other financial partners,” says Rybalkin. “It is important that the new management was able to build a viable business model, and lenders and investors fled after the lifting of the moratorium” — according to senior Director financial institutions Fitch Ratings Alexander Danilov.

On the difficulty of recovery of the customer base the challenges that await Peresvet, not over, continues Rybalkin. “The third problem is that falling interest rates in the financial market. If previously rehabilitated banks could just buy bonds borrowed from Central Bank funds and to make or grant loans, more risky, but now such opportunities are significantly narrowed,” he says.

In this situation much will depend on the experience and creativity of management of the Bank-the Bank rehabilitation, under whose operational control will pass the reorganized Peresvet, according to market participants. “Plus the Bank that he is strong enough shareholder “Rosneft”, which regularly increases the capital of a credit institution. So, at the end of 2016, structures “Rosneft” has poured into the Bank’s capital of about 88 billion rubles,” — said the head of the group Finance ACRES Kirill Lukashuk. However, the “overexposure” as the world Bank, a fairly specific business model, and the big question is whether to transform the Bank “Peresvet” in the classic Bank with a market business model, says Lukashuk. “With regard to human resources, usually banks-sanatory attract top-management for the rehabilitation, however, we must understand that this is a serious diversion of operational resources from the core activities,” he concludes.