The responsibility of the President

The German authorities called on Monday, 17 April the Turkish government to search for “respectful dialogue” with all political and social forces in the country, said in a joint statement, German Chancellor Angela Merkel and Minister of foreign Affairs Sigmar Gabriel. “The results of a busy referendum show how deeply split Turkish society. This means that a big responsibility lies on the country’s leadership and personally President Erdogan,” they said in a statement. A day earlier, the European Commission advised Ankara to achieve a broad national agreement on constitutional amendments, given the small margin of votes to support the reform of the Constitution.

A referendum on switching to presidential form of government with a parliamentary, on April 16, ended with the victory of Erdogan’s supporters with a narrow margin of votes. Calculation of 99.97% of the ballots showed that for the extension of the powers of the Turkish President voted 51,41% of the voters, 48,59% against. The turnout was 85,32%. The official results will be announced within 12 days.

Immediately after the vote, the opposition Republican people’s party (CHP) has announced its intention to challenge the results and demand a recount 60% of the vote. The day of the referendum, as it became known that the Supreme electoral Council (CEP) of Turkey during the counting of votes decided that could be taken into account ballots without stamps. According to the procedure, each ballot must be placed the seal of the district election Commission, the OSCE writes in its preliminary report on the vote. The decision of the vis to take them to the counting is a violation of the statutory provisions according to which such ballots should be invalidated, says the report of the OSCE. The head vis Turkey Sadi Guven confirmed that he had decided to accept the ballot papers without stamps at the last minute. According to him, this situation is not unprecedented, in the past there were cases when the authorities were allowed to take ballots without stamps. The opposition Pro-Kurdish Party democracy peoples claims that up to 3 million ballots were no seals and their acceptance to count affected the outcome of the referendum. Supporters of Erdogan, won by a margin of 1.4 million votes. 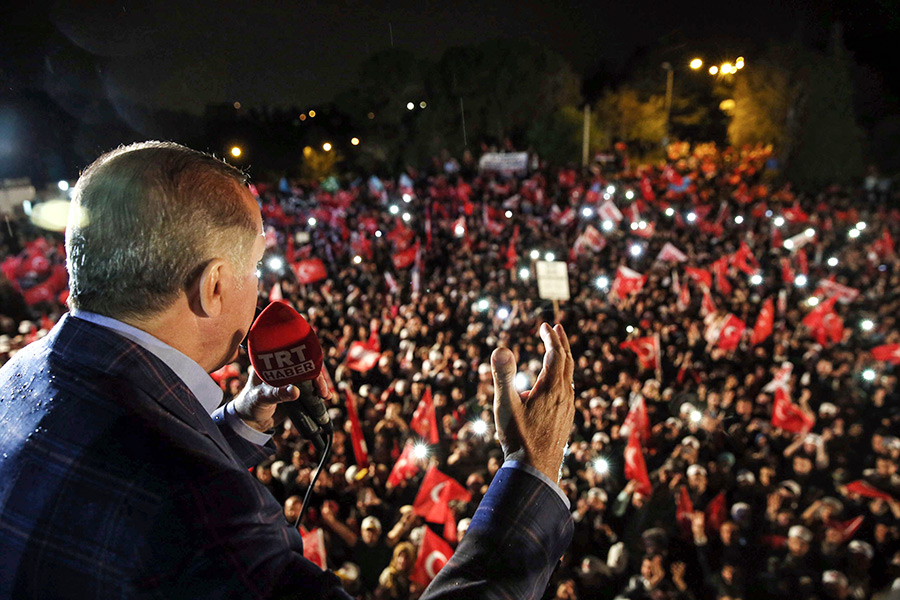 Recep Tayyip Erdogan speaks after the results of the constitutional referendum

The results of the referendum in Turkey is a Pyrrhic victory for Erdogan and the ruling party, as the problem of political stability in the country is still relevant and solved the challenge will be far from easy, said Volkan Ozdemir, expert of the Department of Eurasian studies at middle East technical University in Ankara. “Regardless of the political consequences of the referendum results clearly indicate that Turkish society is divided into two camps,” said Ozdemir. Society is divided, and his share of the blame in this and carries the current government, I’m sure the independent expert on Turkey Timur Akhmetov. Controlling significant media resources by the ruling justice and development relied on antagonization contradictions in society in the hope to consolidate their own electorate, he explains. After the referendum, the emphasis on political differences will decline until around next election 2019, in preparation for which Erdogan may again earn political points on the game on the contradictions predicts Akhmetov. The President’s authoritarian methods succeeded, making a legitimate way of a presidential Republic, further actions of the authorities will be focused on the consolidation of the new regime, including relatively mild repressive measures against dissidents without slipping into overt authoritarianism, says Akhmetov.

After the referendum Turkey from a parliamentary Republic, the foundations of which were laid in 1923 by the founder of the Turkish Republic by Mustafa Kemal Ataturk, will be the presidential. The post of Prime Minister be abolished and the Executive power concentrated in the hands of the President. He will directly appoint a Vice President, Ministers, some members of the Board of judges and prosecutors. He will also receive the right to issue decrees, dissolve the Parliament, to introduce and to cancel a state of emergency.

The President also will have the right to be in a political party. Under the amendments, the next presidential and parliamentary elections will be held November 3, 2019. The current President erdoğan, who was appointed in 2014, will be able to take part in the campaign in 2019 and in the next, in 2024.

Of the 18 proposed amendments in the near future will be implemented three regarding the appointment of judges and prosecutors, the abolition of military courts and restore the rights of the President to be of the party. The rest will start to operate after the elections of 2019.

Departure from the EU

MPs of the ruling German party CDU/CSU believe that the outcome of the referendum should put an end to the negotiation process on the accession of Turkey to the European Union (the formal negotiations on this issue have been conducted since 2005). The prospects of Turkish membership in the EU are “self-deception”, the negotiations should be removed from the agenda, said on 16 April the Deputy Chairman of the Christian social Union (CSU), Manfred Weber. The door to the EU for Turkey “permanently closed,” said Julia klöckner, Vice-Chairman of the Christian democratic Union (CDU). In her opinion, Brussels should stop providing financial support to Ankara. Of reforms necessary to carry out the plan for accession to the Union, Turkey has already received from Brussels €4.8 billion and until 2020 was to receive another €4.45 billion, according to Deutsche Welle.

German opposition calls for more radical steps. You must revoke 260 German soldiers from a Turkish military base of Incirlik (used by NATO) and to stop the supply of arms to Ankara, said the leader of the Left party Sahra wagenknecht and Chairman of the Green party CEM Ozdemir (their words are quoted by Deutsche Welle).

The outcome of the referendum will give a reason to block Turkey’s accession to the EU, said the Turkish expert Volkan Ozdemir. To further worsen relations with the West may be the intention of President Erdogan to restore the death penalty, abolished on his initiative in 2004. On 16 April after the closing of polling stations, Erdogan said that he intends to discuss this matter with the government as quickly as possible. The restoration of the death penalty — an unrealistic scenario as it carries many risks for the Turkish President, who is still trying to maintain a dialogue with the West, said Ozdemir.

“For the EU the introduction of the death penalty is the red line crossing that Turkey can permanently complicate the negotiation process with Brussels. Most likely, the topic of the death penalty will continue to pedalirovanija the Turkish authorities, but the real steps in this direction will not be made”, — said Timur Akhmetov. The restoration of the death penalty may lead to unrest among the Kurdish population, who fear that the first death sentence can be handed down to the leader of the PKK Abdullah Ocalan, he explains. The Turkish authorities declared the party a terrorist organization. Erdogan before the referendum said that the population requires to punish with death involved in a failed coup in July 2016.

The results of the referendum in the price jumped to Turkish Lira, according to Bloomberg: in the first minutes of trading in Istanbul on 17 April, the Turkish currency has strengthened by 2.5% to 3,6188 for $1, the biggest intraday increase since January 30, and 13:16 MSK was trading at the level of 3,6650. This is a short term trend, I’m sure head of the Department of Turkey of the Institute of Oriental studies, RAS Natalya Ulchenko. Political stability is undoubtedly a positive factor for the domestic markets in Turkey, the expert said in an interview with . However, in the long term, too early to draw conclusions — the referendum may impact both positively and negatively, depending on the political and economic environment. “The economic situation in the global financial markets are volatile. Today, the level of interest of foreign capital in the Turkish economy] is reduced, and without it, Turkey will not be easy,” said Ulchenko.