Employment in the informal sector of the Russian economy by the end of 2016 reached a record size at least since 2006, should be published in late March, Rosstat data (earlier data unavailable). In 2016 in the informal economy were employed 15.4 million people, or 21.2 per cent of total employment.

Compared to 2015 year the informal sector had increased by more than half a million people. It is continuously growing since 2011 and during that time has increased by 4 million, follows from the calculations based on Rosstat data.

According to Rosstat criteria employed in the informal sector are those who work for companies, not registered as a legal entity that is self-employed, farmers, individual entrepreneurs and persons working for them are employees, and family members, assisting in own business or in business belonging to someone from relatives. Therefore, in the informal sector are not included the people working at the enterprises-ulicah without executing a contract or receiving a gray salaries. Rosstat estimates the volume of the informal sector at a low level and calculates it as the difference between the number of all employed in the economy and number of jobs replaced in legal entities, the Director of the Centre for labour market studies Higher school of Economics (HSE) Vladimir Gimpelson.

The problem is broader

But, according to last year estimates of the Ranepa, in the broadest sense, in the shadow labor market includes 30 million Russians (more than 40% of the economically active population), of which 21.7 million people — those who are additional to the main place of work of unrecorded earnings or receive part of the salary unofficially in “envelopes”. And he Rosstat monitors “non-observed economy”, which includes not only informal sector and the hidden labor to legal entities, considers the indirect method, the income of workers in the informal sector and informal labor income in the formal sector.

According to Rosstat, the hidden payroll in the country is constantly growing: in 2011 it increased from 6.3 trillion (10.6% of GDP) to 10.9 trillion rubles (13.4% of GDP) in 2015. The figure Rosstat receives, using the balance method: total of household expenditure is deducted the amount of all reported income. The resulting imbalance is the amount of gray salaries, says Gimpelson. The Finance Ministry estimates the volume of informal wages in the country in 12 trillion rubles., said in March, Deputy Finance Minister Volodymyr Kolychev: “6 trillion is the envelope schema, and about 6 trillion rubles. — wage informal sector.” 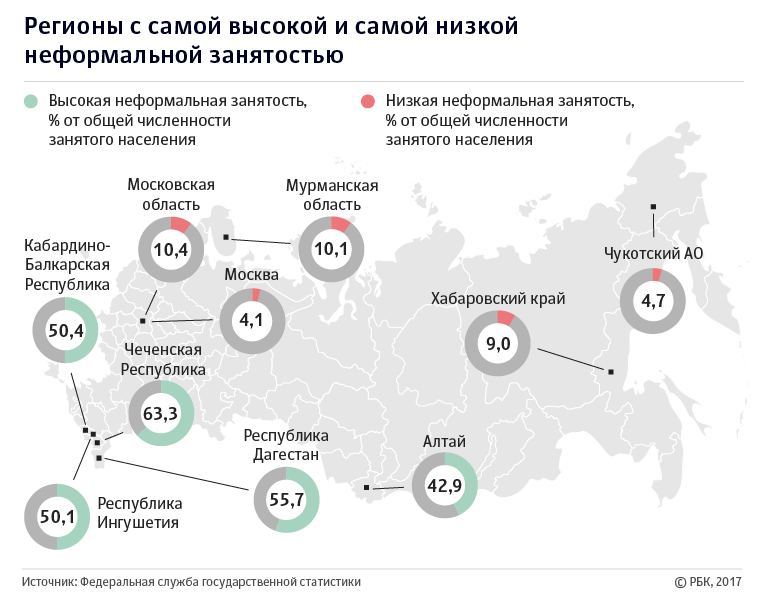 Data on informal payment for 2016 Rosstat yet, but there is data on wages in General is 40,2 trillion rubles., estimated by the production and use of GDP for 2016. Considering that in 2014 and 2015, the hidden payroll was 28% of the total and the share of the latent payment is increasing from 2011, you can apply a factor of 0.28 to the payroll of 2016 — so gray-wage and informal work in the past year could be about 11.3 trillion rubles, or even more.

The informal sector is growing due to the worsening economic situation in the country, said Vice-rector of the Academy of labor and social relations Alexander Safonov. “Due to the increase of VAT rates the business seeks to cut expenses on other payments, hence the fade. Too high a price of goods or services can frighten off the consumer, therefore it is necessary to save on other payments,” he says. In the conditions of crisis companies tend to reduce the overall tax burden, says Safonov.

Most employment in the informal sector characteristic of the southern regions: the largest number of “informal” workers Rosstat fixes in Krasnodar Krai (734 thousand), Dagestan (662 thousand) and Rostov region (623 thousand). Among the sectors occupied by informal leaders in the sphere of trade and repair, agriculture and construction — collectively these employ 9 million informal workers.

Need to be better

To assess the real size of the informal sector employment, there are more criteria than are used by Rosstat, says Safonov. “We tend to refer to informal employment that is not related to corporate relations. Evaluation criteria the informal labour sector needs to be diverse. It is necessary to take the data that Rosstat gives grey employment, FTS data, the data on the basis of the RPF — who pays the insurance premiums regularly and who is not — it will be most correct information”, — the expert believes.

The Finance Ministry plans before the end of the year to develop a set of measures to withdraw business from the shadows, this April 14, said the Deputy Minister Kolychev. According to the authorities, the business goes into the shadows because of the high rates of insurance premiums. “We see that now a big burden on labor, large direct taxes in the form of insurance premiums, even though they are not considered to be taxes, nevertheless the same tax. Large the cost of labor and create a large volume of the informal sector is still large amounts of salaries are paid via the envelope scheme”, — said the Minister of Finance Anton Siluanov in February. According to the Finance Ministry, to facilitate the exit of business out of the shadows will be a reduction in insurance premiums. The Agency proposes to tax maneuver scheme “22/22”: lower the contribution rate to 22% with a simultaneous increase in the VAT rate to the same magnitude.

The maneuver will allow “non-violent” to rehabilitate the economy, explained in March Kolychev, will reduce the cost of switching from informal practices to formal. Inaction, in the opinion of the Ministry of Finance, can lead to the growth of the informal sector, and this will lead to a reduction in tax revenues: payroll or not paid personal income tax and insurance contributions.

In the early 2000s, the government tried to reduce the share of illegal sector in the economy, reducing the payment rate to the pension Fund, recalled the Minister of labour Maxim Topilin. But the rate has increased, as and the informal sector.

The shadowing contributes to the growth of incomes, says Safonov: it allows you to hire people for personal services — nannies, housekeepers, which are settled in cash, any fees and taxes are not paid. Another reason for the proliferation of the informal sector labour — the high cost of the loans, he said. “As a business to accumulate money to invest in their development? Only saving, and it saves on labor costs, the deductions in the first place”, — the expert explains.