According to a source in one of network shops of electronics, the Finnish company Global HMD licensed to release devices under the brand Nokia will present Nokia 3310 in Russia on 16 may. The same date called the representatives of the two major mobile retailers. On the same day in the largest retail networks in the country will start official sales of the updated model, which became famous in the early 2000-ies due to its strength and the capacious battery, said one of the interlocutors .

The representative of the Global HMD neither confirmed nor denied that date, only said that “the price and date of start of sales of the new line in Russia will be announced in the second quarter of 2017”.

Global HMD introduced an updated version of famous for its “indestructibility” Nokia 3310 mobile world Congress in Barcelona in February this year. As reported by the manufacturer, the phone features a 2-megapixel camera, MicroSD slot and MP3 player. New 3310 should be available in four colors: glossy red and yellow and matte grey and blue. The unit will be able to work nearly a day of talktime and a month in standby mode, as was the case with the previous version of Nokia 3310. The retail price of the device was declared HMD Global in February, should be €49 (2,95 thousand rubles at the current exchange rate of the Central Bank of the Russian Federation). What will be the total retail cost of the phone in Russia, one of the interlocutors could not say.

Then, in February, Global HMD presented in Barcelona the new Nokia smartphones: models 3, 4 and 6. All three are managed by the operating system Android Nougat. Nokia 3 has front and rear camera of 8 megapixels, a screen diagonal of 5 inches, supports LTE and also has a slot for a memory card. Nokia 5 in an aluminum casing, the display is 5.2 inches, the resolution main camera — 13, while the front — 8 megapixels. The flagship model of the series Nokia 6 has a 5.5 inch screen, fingerprint scanner, a rear chamber 16 and front to 8 megapixels. According to the representative of one of the largest Russian retailers, in the day of the presentation devices to smartphones will open pre-orders. Their retail price will average from 10 thousand to 15 thousand RUB “In this price range Nokia smartphones will be competing with some models of Samsung and Chinese brands”, — said the source . In Barcelona, the company claimed that the price of new models will start from €139 (of 8.38 thousand RUB) to €229 (13.8 thousand rubles). 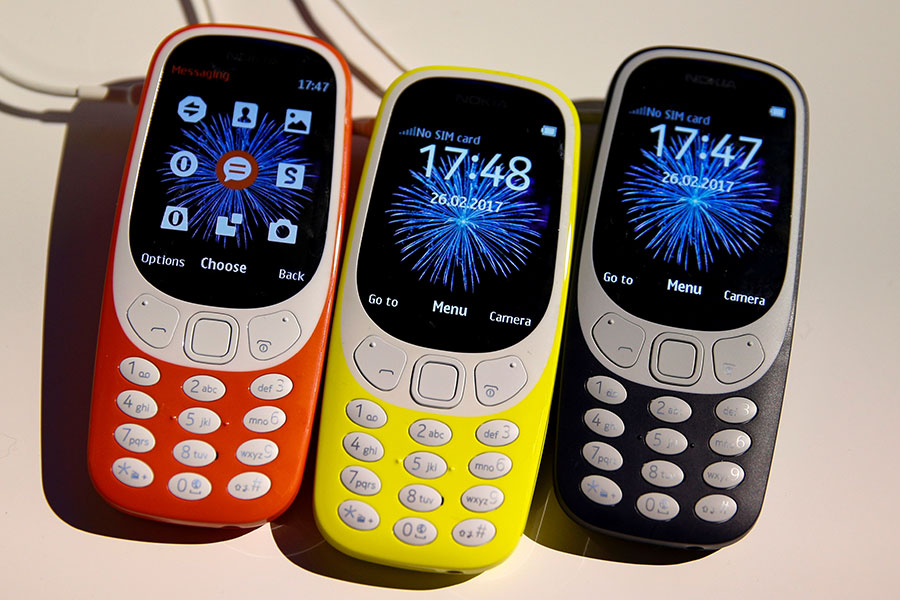 The first version of the Nokia 3310 was introduced in the year 2000. Release device worked itself Nokia. In 2001, the company turnover amounted to €31 billion, this year it was the largest mobile phone market in the world. Only Nokia sold 126 million units of the model 3310.

However, over time the company began to push other producers, and in 2013 Nokia announced the sale of mobile business to Microsoft for $5 billion, another $2.2 billion was paid for the patents in the field of mobile telephony. Microsoft has released Lumia smartphones for its Windows Phone operating system, but in 2014, they were renamed to Microsoft Lumia, but the Nokia logo was only on push-button devices. In 2016, Nokia has provided the right to use its brand Global HMD designed specifically for the production of mobile devices. Director Global HMD became a former top Manager of Nokia Arto Nummela.

According to Svyaznoy, the Russian market of smartphones by the end of 2016 amounted to over 26 million devices were sold in the amount of more than 320 billion roubles On the assessment of the MTS, the largest brands on the Russian market by the number of units sold in 2016 were Samsung (21.6% of the market), Apple (11,1%), Lenovo (8.1 percent), ZTE (7,2%) and Fly (7.4 per cent). The Microsoft’s share was 1.6% share directly Nokia in MTS has not been evaluated.

According to the forecast of Director of procurement Department of “Euroset” Alexey Shirokov, year-end share Nokia in the Russian market may reach 5%. “We associate that number with the fact that the Nokia brand still strong in the minds of buyers,” — said Shirokov.

With this agreement the representative of the network “the Messenger”. He recalled that the smartphones under the Nokia brand has been ranked in the top three most in demand in 2013 and 2014. In 2015, when the market was presented simultaneously and smartphones Microsoft and Nokia, they are also included in the top three in sales. “We expect the entire updated line of Nokia phones will be popular among buyers in our country”, — said the representative of the retailer.

The success of the remake of Nokia 3310, the representative of Svyaznoy, will contribute to the fact that, despite the growing popularity of smart phones, push button phones continue to be in demand in the first quarter they accounted for about a quarter of sold in Russia of mobile phones. “For many Russians, it is sufficient basic functionality of phone calls and SMS, — explains the representative of the retailer. — Plus the price of the keypad device is significantly lower than that of a smartphone”.