While conservative investors to invest in bonds, and their more risk-averse colleagues are trying to make money on the stock, outside the box thinking speculators invest in fashionable sports shoes. The fact that the shoes are often rising in price much faster than traditional assets. For example, published in 2011, the fourth re-release of the models Air Jordan 3 Black Cement 1988 was worth at retail about $160, and by 2015 the price per pair increased by 162%. For comparison: Apple shares over the same period rose by 134%. According to estimates by the Financial Times, in 2016, the volume of global secondary market sneakers reached $1 billion, with up to 30% of turnover accounted for by online eBay store.

In February of last year, investors in sports shoes has acquired its own trademark online StockX stock exchange, one of the founders of which was a businessman and owner of basketball club Cleveland Cavaliers Daniel Gilbert. Among the founders of the American lit project rap artist Eminem and actor mark Wahlberg. The momentum of his trade “exchange shoes” StockX not disclosed.

On the website StockX, you can examine the price quotes for different models and brands such as Nike, Adidas, Jordan and others. And prices change in real time based on transactions made through the website StockX, as well as through other major platform for the sale of sneakers — eBay and Fight Club. To use the service can volunteers from most countries of the world, including Russia.

To make it easy, for the services of a professional broker to use is not necessary. The user leaves the website the application for the purchase or sale of footwear of a certain model and size, participating in automated auctions. He also has the ability to track the value of their collection (in the terminology of StockX — “portfolio”). The buying process from beginning to end supervises StockX, guaranteeing the timely payment of sellers, buyers authenticity of the models. However, the Commission site is quite high — 10%. Oh and don’t forget about the shipping costs, which can reach up to $100 if the goods flying into Russia from another continent.

However, with the investment of a few hundred or even thousand dollars, these costs lose their importance. And this does not mean the purchase of multiple pairs. Because, for example, as of March 1, 2017, the most expensive pair of running shoes on the site were Jordan 4 Retro Eminem Carhartt with an average price of $16 285.

Private collector and editor of the specialized journal “C. E. D.” Dmitry Egorov estimates the number of professional collectors of sneakers in Russia (who buy them in order to obtain long-term profits) to a maximum of 2 thousand people. Much more on the market speculators who tend to buy new model fashion Shoe at first, then quickly, before the excitement abated, to resell it at a premium. According to Egorova, due to the fact that the recommended retail price for fashion model in Russia is somewhat lower than in European countries, so the potential for profit speculators.

found one of these hunters at a rapid rate of return — 18-year-old student of the Ranepa Dmitry. He told how he tried to buy sensational sneakers from Adidas Yeezy Boost (the recommended price of 16 990 rubles.), which went on sale on 10 February this year. According to Dmitry, the competition was so high that it was necessary to inscribe on the list just to get in line. On hand were issued one pair of Yeezy adults and one for children. Together with friends Dmitry have bought five pairs of adult shoes and two pairs of children. A few days they managed to sell the adult pair in 30 thousand rbl. the Popular sizes were more expensive. But children’s shoes (9990 roubles) no one not needed. “I don’t know why we bought baby Yeezy. They are difficult to sell even at retail price,” complains a student.

However, the mistake is forgivable. The first model Yeezy made in collaboration with Nike and will go on sale in February 2014 at a price of $245 for the pair, now estimated at about $7.5 thousand in the first day after release on eBay the auction price soared to $17 million This is not surprising when you consider that sneakers was released edition of just 50 pairs and sold out within 11 minutes. Model Yeezy, which hunted student Dmitry, official Adidas store at the Kuznetsk Bridge was available in quantity of 250 pairs. “Previously in line for sneakers usually get up an hour before the start of sales, now stand sometimes even for a week,” says the founder of the store premium clothing and collectible footwear Brandshop Grebenshchikov Ilya.

Egorov notes that new Yeezy is of little interest to collectors, as the main fetish among them are vintage models, especially Nike and its Air Jordan line, occupying approximately 96% of the secondary market. 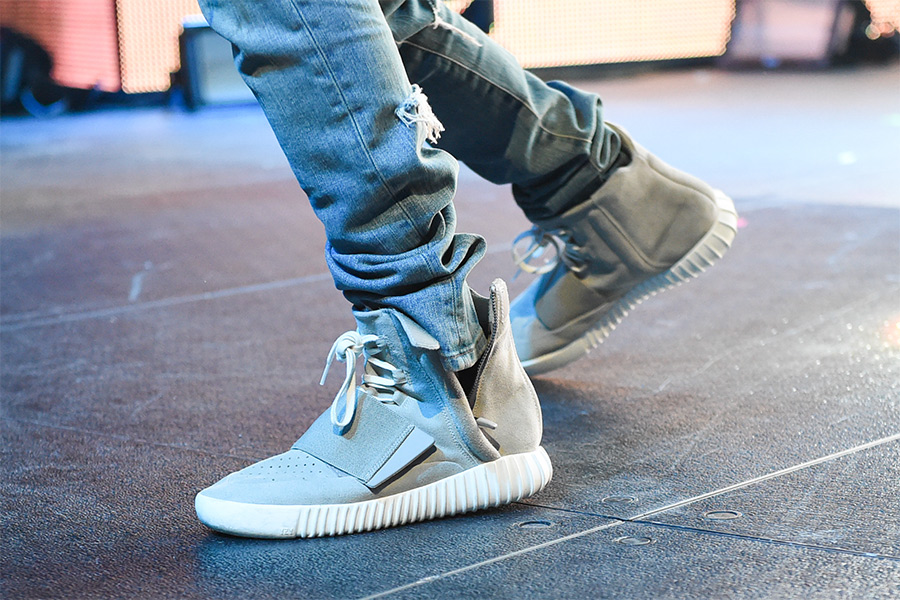 According to Yegorov, over the past two years the market has become less stable. A few years ago he earned $1 thousand on the resale of rare Nike Air Yeezy and Nike SB What The Dunk. However, because of frequent new releases and artificial hype created by the speculators, long-term forecasting of the prices for shoes becomes problematic. In addition, prices on online platforms like eBay can not be overstated and the liquidity of the sneaker is very small. To get them for a good price in the sale, have to wait long.

“There used to be collectors of sneakers, who bought everything. Now they are focused on collecting thematic collections. Someone is collecting Air Max 95, someone buying only original Adidas,” says Egorov. His pessimism is not shared by Ilya Grebenshikov and chief editor of the Sneakerhead community the novel is Raim. Grebenschikov believes the decline in the secondary market are unlikely in the next five years. In his opinion, even a vintage reissue pair is unable to stop the rise of prices on collectible artifacts. Raim adds that now it is safe to invest in buying popular sneakers, expecting good returns in 10-20 years. It is important to understand that the unworn pairs will go much more expensive, said Raim. According to collectors, the best tools for investing are vintage Nike and Air Jordan in the 1990s and early 2000s. it Also makes sense to pay attention to a limited collaboration brand Asics, not considering blockbuster models like the Adidas Yeezy Boost or NMD as long-term investments. The average cost of such models is in the range of $100-1000 per pair.

Is it worth buying

Experts on portfolio investments agree that investing in rare models of sneakers can be considered as financial strategy, albeit with many caveats. Assets management UK “BKS” Nikita Emelyanov compares purchase vintage sneakers with investments in objects of art, and attempts to cash in on the brand new Yeezy — venture investment in the company. These types of investments are high risk and require significant expertise, and their share in the portfolio should be the smallest. Portfolio managers usually set it at the level of 5-10%, while the remaining 90% should go to fixed income instruments (bonds, deposits) and shares of reliable companies. Investment Director IK “University the Capital” Dmitry Aleksandrov, in turn, draws an analogy with coin collecting and recommends looking for running shoes with history: vintage limited edition pair of shoes with autographs, etc.

The weaknesses of investments in sneakers are low liquidity and the need for physical delivery and storage of goods, says Director of business development “BCS Premier” Anton Grabarov. He is convinced that lovers of fashionable sneakers better to make them more reliable way is to buy stocks and bonds of the companies-manufacturers. “Nike shares three years ago cost $27 apiece, and is now listed at $58. Shares of Adidas also increased by more than twice”, — says the expert.

One of the ways to invest in these securities to by the Pai, the sole mutual Fund industry “the sports industry”, which includes shares and bonds of the largest players in this sector, including Nike, Adidas and Asics. According to Investfunds, for the last three years the yield of this mutual Fund made up 73,62%.