The Russian market for home care (detergents, washing powders) continues to fall in real terms. This is evidenced by research company Nielsen (have).

In real terms sales for the year ended in the first quarter of 2017, down 2.5% year — on 1,6%. Demand from buyers has declined, despite the fact that prices rose more slowly than in the previous year. The price increase of 5% compared to 18.3% a year earlier. As a result of these two factors in monetary terms, the market grew by 2.1% year — on-year by 11.5% (in absolute numbers of researchers are not disclosed).

The Russian market of detergents and cleaning products is reduced since the third quarter of 2016, confirms the General unit Manager Henkel Laundry & Home Care Tomas Duffek. Consumers are looking for more economical products, according to a study by Nielsen. “Russians stick to savings behaviors and switch to economical consumption”, — says Director of global companies, “Nielsen Russia” Marina Lapenkova.

On the background of General stagnation significantly increased sales of universal tools that can be used for multiple purposes. Their sales grew by 14.9% in volume and 20.2% in cash. Demand with specialized detergents has shifted to means that are suitable for any clothes. Increased sales of liquid, gels for washing, because they are consumed more economically than traditional powders, say Lapenkova and Duffek. Buyers consider how many washes will last one powder packing, agrees Director of sales drogerie-network “Smile of the rainbow” Maria Mironovskaya.

“Consumers, on the one hand, low on money, and on the other are mentally tired to save,” — says Mironov. In this situation, the demand for luxury international brands is declining, and sales of products under own trade mark (STM) retailers or not very well-known brands, in contrast, are growing, she says. According to the “Smile of the rainbow”, every other product sold in network, is STM.

However, in General, the market for home care private label represented “not very well”, according to the materials of Nielsen. How much the market falls on the STM, the researchers did not disclose, but indicate that total sales of private brands, the largest share of air fresheners (24.9% in real terms), means for cleaning pipes (18.3%) and bleach (17.1 per cent). Meanwhile, in most major categories — detergents, cleaning products and preparations for washing the utensils — the impact of private labels “almost minimal,” the study says. “Networks are more difficult to compete with international manufacturers, who already have high-quality and affordable from the point of view price brands,” says Lapenkova. 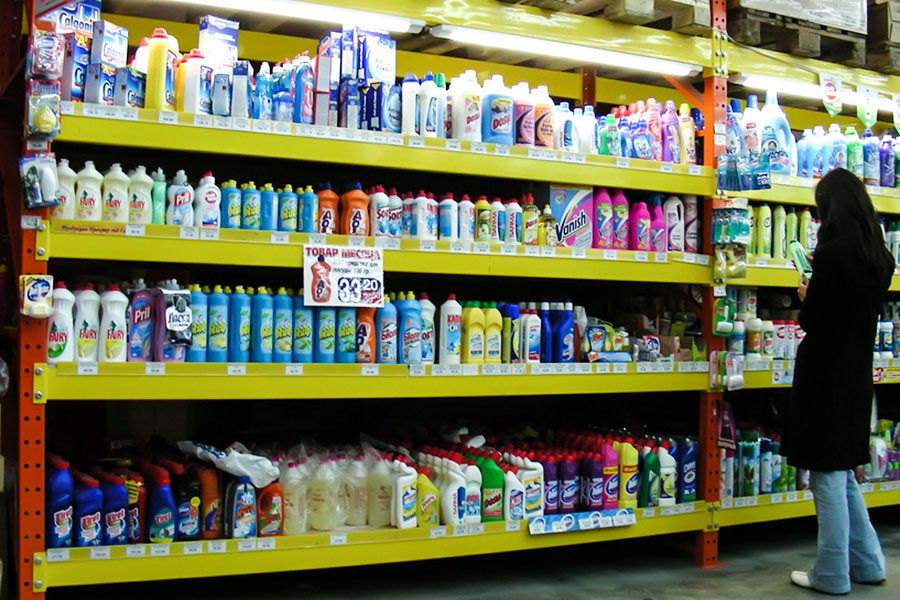 Beauty instead of washing

The largest niche in the sales tools for home care, according to Nielsen, is a specialty stores was 31% in monetary terms. However, sales of household chemicals in them are stagnating, falling for the year in rubles by 0.7%. While sales in supermarkets and hypermarkets, by contrast, grew by 7 and 2% respectively.

Interviewed representatives of networks of drogerie (to combine the range of household chemicals and cosmetics) noticed a reduction in the demand for tools for the home, but say that could compensate him for the expense of cosmetics. That the main driver of sales is a cosmetic, said Dmitry Scherbakov, owner of drogerie “Sangi Style” — the second largest company in the market. Earlier in the message about the results of the 2016 network “Smile of the rainbow”, said that the main direction of its development in 2017 will be the makeup.

The Russians have reallocated expenditures in favor of personal care products and beauty. In particular, the purchase of products for facial care grew by 28% in value and 9% in units, according to a study by GfK on trends in the FMCG market and retail sales in Russia in 2016. This year has been for the Russian market of cosmetics and perfumes are more successful than 2015, concluded the analysts of marketing Agency “. The study of markets.” In 2016, the market grew by 3% to 509,5 billion rubles, and in 2017 it’s projected to grow by 6.7%, to 543,8 billion rubles and exceed pre-crisis levels in 2014, predict the researchers.

In the end, despite the weak dynamics of the market of household chemicals, the number drogerie continues to grow. The market leader “Magnit cosmetics” (“Magnet”) opened in 2016 986 stores and plans to open in 2017 1 thousand Network “Smile of the rainbow” has increased in 2016 to 90 stores, and over the next three years expects to grow more than twice — at least up to 1 thousand outlets. Come out to the market and new players. In 2016 the French group Auchan has launched a network Lillapois, and founder of “First decision” (brand “Recipes grandmother Agafia”) and “Natura siberika” Andrey Trubnikov opened Agafia Shop. In 2017, a former shareholder of a network “copeck” Alexander Samonov has launched a drogerie stores under the guise DM.