“2016 has become extremely productive for large agricultural holdings to increase land Bank”, — stated in the study by auditing and consulting company BEFL. The total land Bank of 50 leading companies in Russia has exceeded 12 million ha. With a quarter of these lands to 3.25 million hectares, were in the top five. From April 2016 to April 2017, the top five increased their selhozprodukti a total of 310 thousand ha, i.e. by 10.5%, analysts estimated BEFL.

So, one of the nation’s largest meat producer Miratorg has increased its land Bank by 8% (to 644 thousand hectares), “Rusagro” ex-Senator Vadim Moshkovich — by 13% (670 ha), and “agro them. N. And. Tkachev,” associated with the family of Minister of agriculture Alexander Tkachev, by 40% (640 hectares).

However, the agricultural holding “Step”, which belongs to AFK “Sistema” Vladimir Yevtushenkov, was able to demonstrate in 2016, even higher dynamics. Area of agricultural land under management rose 2.5 times, to 350 thousand hectares, providing the company ninth place in the ranking. In October 2016, the FAS approved the application of GC “Step” on the acquisition of four companies — JSC “Soldier khlebopriemnoe PREDPRIYATIE” in Kabardino-Balkaria, JSC “Agroclimatology” and “March” in the Stavropol region, as well as “agro-Michurinskoye” in the Rostov region. In January 2017 Vladimir Evtushenkov in an interview with TV channel “Russia 24” said that before the end of the year GK “the Steppe” can go for an IPO.

“New macroeconomic and geopolitical conditions significantly increased the role of import substitution,” which “has led to growth of profitability of subsectors of agriculture whose products are sold in the domestic market of Russia”, said the representative of AFK “Sistema”. In turn, the “significant devaluation of the ruble has significantly increased the attractiveness of exports of agricultural products from Russia”, — he added. 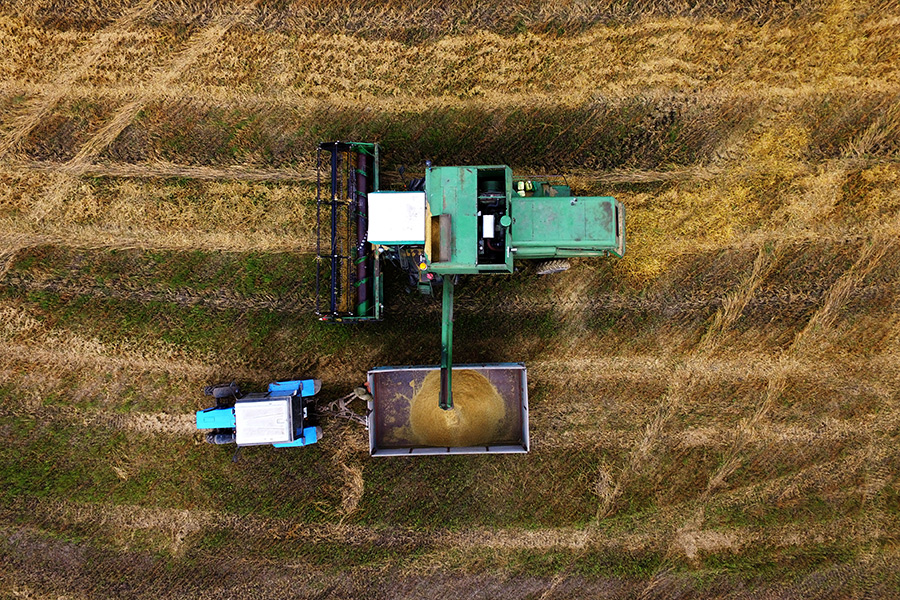 Agriculture has become one of the most dynamic sectors of the Russian economy. Against the background of falling national GDP by 3.7 percentage points. in 2015, the agriculture, hunting and forestry, by contrast, increased by 3.1 percentage points, according to Rosstat. By the end of 2016, the industry added another 3,6 p. p. compared to the same period last year, while GDP declined by 0.2 p. p. the Share of agriculture in GDP, according to Rosstat, reached 4.5%.

According to the agriculture Ministry, in 2016, Russia has earned on the export of agricultural products of $17 billion, which is 4% higher than a year earlier. Thus, according to calculations based on data from the Federal customs service, the volume of food exports to China grew 19.5% in monetary terms ($1.55 billion), and Egypt — 22.6% ($1.2 billion). These countries are the key consumers of Russian food.

In 2016, Russia harvested record amount of grain — 117 million tonnes, reported “RIA Novosti” with reference to Alexander Tkachev. Such is the harvest of grain and leguminous crops was a record for the last 38 years. In the end, Russia had become the world’s largest wheat exporter, surpassing the US, Canada and Australia. Domestic farmers sent abroad a total of 25 million tonnes, which is 14% higher than in the previous year, estimated the Russian export centre.

With this view agrees the General Director of the Institute for agricultural market studies Dmitry Rylko. However, he draws attention to the fact that the positive dynamics is shown in the large company, whereas four or five years ago there was a different trend — “increased arable land under the control of the average agricultural holdings or even created a new [company]”. Now, companies with less than 100 thousand ha, look “not serious” players that quite funny. They themselves become the object of acquisitions,” says Rylko. In the ranking of the BEFL company with a similar volume of land Bank positions in the forties. Dmitry Rylko explains the current trend of increased interest in agriculture from the “large domestic non-farm capital.”

For example, in June 2016 at the St. Petersburg international economic forum, a major producer of grain crops “AFG national” (25-th place in the rating) has signed an agreement with the Russian direct investment Fund (RDIF) and several middle Eastern funds on the obtain 9 billion rubles of investments.

However, the mood in the industry is not as rosy as it might seem based on the dynamics of the leaders. The Deloitte research conducted in the fall of 2016, recorded at the Russian farmers, the growth of pessimism. If in 2015 the state of Affairs in your company positively evaluated 94% of respondents in 2016 — only 67%. While satisfaction with the provision of the agroindustrial complex in General has decreased over the year from 61% to 56%. On the contrary, from 39 to 44% increase in the proportion of those companies that consider the situation in the industry is negative.