Deputy Chairman of the Board “Gazprom” Vitaly Markelov in March, informed the head of the Corporation Alexey Miller that he had instructed the heads of the six core departments by July 1, to prepare a comprehensive plan for phased transition to the implementation of new projects of the investment program “Gazprom” on the basis of EPC contracts (a copy of the letter). According to the respondents, experts and market participants, as a result of the new scheme, which shifts all project risks to the contractor, in 2018 can be filled about a third of the program of gas concern, which is estimated at 1 trillion rubles. Moreover, the reduction in Gazprom and its subsidiaries can be up to 500 people.

The merger and reduction

EPC-the contract (from the English. Engineering, procurement and construction) suggests that the contractor undertakes the full cycle of works — design, procurement of materials and actual construction. In fact, this “construction turnkey”, and undertaken for a fixed price, the remuneration for management of the project and the organization of work is not provided. The customer thus has at least the authority to manage the EPC contractor or subcontractors.

With regard to “Gazprom” work on the principle of EPC can be performed for the construction or repair of pipelines within the country and abroad, supply of pipes and equipment, construction of processing and LNG plants and field facilities. “Gazprom” has already signed EPC contracts for projects such as the pipeline “Turkish stream and Nord stream-2” (underwater part is building the Swiss company Allseas), the Amur gas processing plant (EPC contractor NIPIGAS).

Calculations and proposals for the transition to the new system of work with contractors should hold heads of departments of “Gazprom” responsible for construction, engineering, human resources, corporate costs, legal issues, Finance and Economics. As stated in the letter Markelov, a change to the way of working with contractors will affect the administrative structure of the group. It is assumed a reduction of at least three specialized departments: Department 333 Sergei Prozorov (responsible for construction), 336 Department under the leadership of Andrew Skripnik (design works) and the Department of 121 Michael Sirotkin (corporate costs).

The first two departments can unite under a single leader. About a possible merger of departments 333 and 336 of said April 13, “Interfax” with reference to its sources in the group. According to the Agency, of the 600 employees in the merged Department may be only 400 people. While the number of Central office of “Gazprom” is estimated at 4 million people.

In terms of the transition to the EPC system also provides for the reduction of personnel in affiliated companies — “Gazprom invest” and “Gazprom komplektatsiya”, which act as clients on a number of projects of “Gazprom”. The interlocutors in “Gazprom” and contractors the company will evaluate the possible reductions in staff “Gazprom” and its “daughter” in number from 300 to 500 people. Two employees of a monopoly do not exclude withdrawal from the company or transfer to another position of the head of Department 336 Skrypnyka and call it “victory of the hardware Prozorov”. They also claim that the cuts are only being prepared. In one scenario, the part of the staff, the functions of which are not claimed after optimization, will be transferred to subsidiaries of the group.

Press Secretary of the Chairman of the Board “Gazprom” Alexey Miller Sergey Kupriyanov refused to comment on the plans for the transition to EPC contracts, possible cuts and the correspondence of his head. Official representatives of the largest building contractors of “Gazprom” — “SGM”, “Stroygazconsulting”, “PETON” — declined to comment. The representative of “Strojtransgaza” the request is not answered. 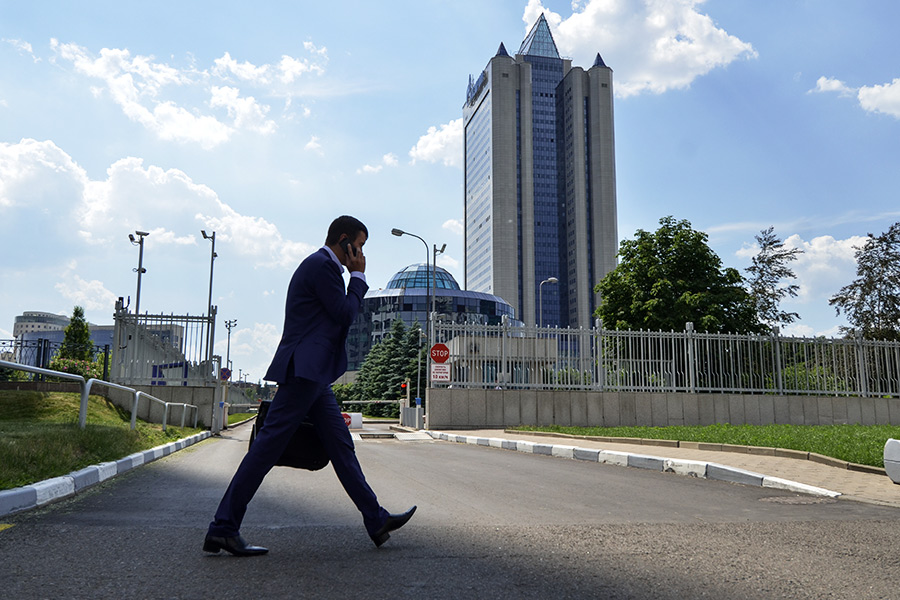 The office of “Gazprom” in Moscow

Benefits and risks of EPC contracts

In a press-service of the company NIPIGAS, part of the SIBUR holding and serving one of the EPC contractors the construction of the Amur gas processing plant, reported that the work on the terms of the EPC contract can reduce costs by controlling all phases of the project. “For the customer this model allows you to interact with a single contractor to administer the contract with him only, to monitor the progress of the entire project and its timing. The contract in the Russian practice often involves the preparation, documentation and execution of the construction works (design for the construction of pipelines Gazprom’s most ordered own structures. — ) but as a result of agreements the scope of work may be expanded. Therefore, the difference between traditional Russian and Western General Contracting EPC contract technically may not be”, — said the representative of Niigata. He added that the EPC contractor must possess all the competencies necessary to perform the work, from the availability of the required experts in the company to procure the necessary equipment.

A source in the company “stroygazmontazh” (SGM) explained that she is already working on EPC contracts on infrastructure projects. He cited the example of the reconstruction of the children’s camp “Artek”, the construction of the pipeline to Crimea, construction of approaches to Kerch bridge. Therefore, he is convinced that the contractor will handle the contracts, “Gazprom” according to the EPC model, the main thing is to have a sufficient number of contracts.

Sources close to the “Stroygazkonsalting” and “Strojtransgaza” also are confident that these companies will cope with the function of EPC-contractor on projects of “Gazprom”. One of them believes that the model EPC contracts beneficial to the contractor. “The main advantages of the growth in volumes and revenue,” he notes.

However, some of the partners of “Gazprom” the new model seems less attractive. The Manager of the company, which is one of the contractors of “Gazprom” for designing, said that the prospect of reducing the volume of orders the company can reduce up to two thirds of working designers (up to 500 employees in all branches). The transition to EPC contracts, in his opinion, threatened the company with loss of chain contractors group.

A source in the other Contracting structure, working with Gazprom on major projects, says the problem of EPC contracts is to increase the number of risks assigned to the contractor. “If the contract price is fixed, it is important that all the payment stages are strictly observed. If there are delayed payments, the EPC contract, this will lead to the shifting of risk back to the customer or to revise the contract price to the upside. After all, the contractor has to take out additional loans, or to negotiate with subcontractors for deferment of payment. It may also affect the timing of delivery of the project,” he said. According to the interlocutor, the margin for EPC contractor having the freedom to hire artists of the order, may be slightly higher than in the General contract. This is possible with the maximum exclusion of intermediaries from the chain of other service providers, including intermediaries for the supply of tubular products, he suggests.

Who will lose the contract

The top Manager of the company involved in the supply of pipe products for projects of “Gazprom”, estimates the savings on the services of intermediaries in the value of contracts for the supply of pipes in 1-2,5% of the contract volume (the higher the contract amount, the lower the percentage of mediator in it). He explains that the intermediary takes on certain risks in the first place they relate to quality assurance of materials. “For most modern large-scale projects using high-tech pipe with the warranty service life of about 50 years. But the desire to save the EPC contractor may purchase products, the service life of 10-20 years. And this time the contractor may cease to exist. Then, the risks of the consequences of such savings, including accident risk, fall on future generations and on the developer of the project,” he said. The source is convinced that transfer to EPC contracts for the delivery pipes is very risky and difficult. The volatility in the metals market reaches tens of percent a year in these conditions it is difficult to guarantee quality of supply at fixed prices for several years ahead, he says.

He also notes that the EPC-contract implies more freedom for the contractor and less possibility of supervision by not only the customer, but to the public. “Now “Gazprom” is obliged to report spending on large projects to reveal the winners of the tenders, and after the transition to ERS, we can do nothing to learn about the part of the performers that you will find the contractor with the actual cost of the services. Thus reducing the possibility of official involvement in a multibillion-dollar orders Gazprom’s recently established companies with a staff of five people, but they can appear in the number of subcontractors by the EPC contractor, and will be unknown to the market,” he warns.

Established in August 2016, the micro-enterprise “inter-management”, which employs no more than five people, has won 34 of the contract “Gazprom” in the construction of the gas pipeline “Power of Siberia”, reported “Interfax” on April 23. The total amount of contracts amounted to nearly 8 billion rubles. 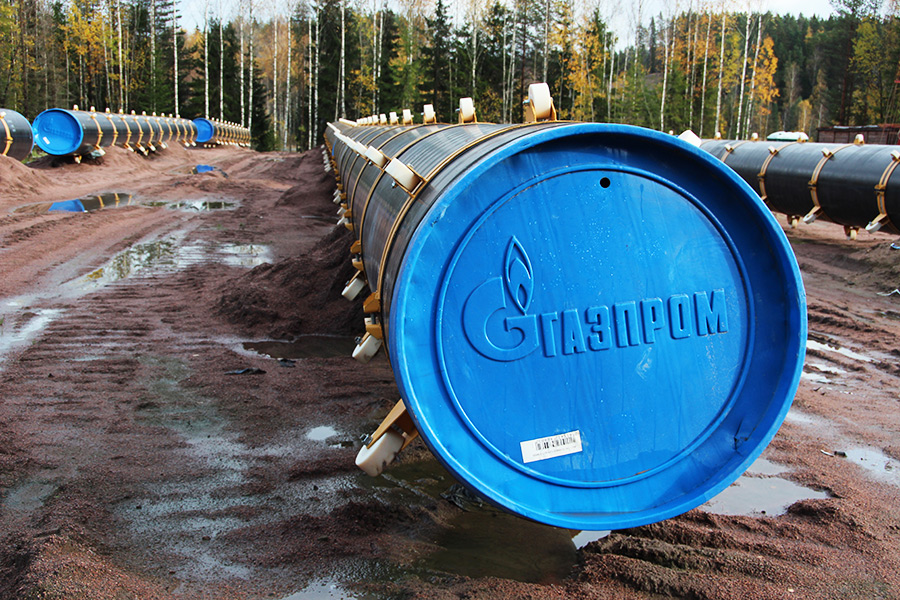 Hundreds of billions to contractors

The investment program “Gazprom” for the year 2018 could be around 1 trillion rubles, announced in early December, the Agency “News-Finance” with reference to the information of “Gazprom”. “Vedomosti” in mid-December wrote that in 2017 it will amount to over 910 billion rubles, billion rubles 625,45 of them (68.7 per cent) will be spent on capital projects.

According to the head of the analytical company East European Gas Analysis Mikhail Korchemkin, if the new schema will be introduced in 2018, then it can be implemented orders for the construction of the “Power of Siberia” pipeline Gryazovets — Slavic and Ukhta —Torzhok-2 a total of 300 billion rubles., that may be a little less than a third of the investment program “Gazprom” for the next year. He agreed that “strange” contractors, companies with low share capital, will lose the status of main, but can be in the chain of sub-contractors in EPC contracts, and payments against them will be difficult to track. Korchemkin believes that the profitability of projects increase in comparison with the current scheme of interaction with “Gazprom” and the revision of prices of projects in the direction of growth will continue, despite the formal principle of “fixed prices” in the European EPC model.

He also believes that part of the cost of a monopoly following the introduction of the new model will go in the future, as they are accounted for after the commissioning of pipelines and other facilities.

The Manager of one of the construction contractors of “Gazprom” assesses the amount of EPC contracts of the group in 2018 in the amount of 100 billion to 230 billion rubles. According to him, most of the contracts for the construction of “Forces of Siberia” and the upcoming expansion of the pipeline Sakhalin — Khabarovsk — Vladivostok contracted on the same principles and the General contractor. He predicts that under the EPC, if he will introduce next year, can get such construction, as the pipeline Gryazovets —Slavic in the amount of up to RUB 100 billion, the contracts for the reconstruction of pipelines (from 30 billion to 50 billion RUB per year) and overhaul (up to 80 billion rubles per year).

Alexander Galaktionov, head of the research group InfraONE, considers that the transfer of “Gazprom” in the EPC will clean the market of grey contractors. In her opinion, the largest contractors of “Gazprom” is able to perform the function of EPC-contractors, and such integrated contracts will be more favorable to them, as, for example, preparatory construction work can be carried out in parallel with design. The winning money she estimates about 5% to the current profitability. Gazprom, in turn, can save on non-core divisions and reduce contract service. The increase in average contract value, and, consequently, ensure it can cut medium-sized contractors on EPC contracts of “Gazprom”. It also increases the risk of the customer: if a comprehensive contract will get unreliable company, the loss will be more serious than the failure of one of the stages of the project, concludes the analyst.