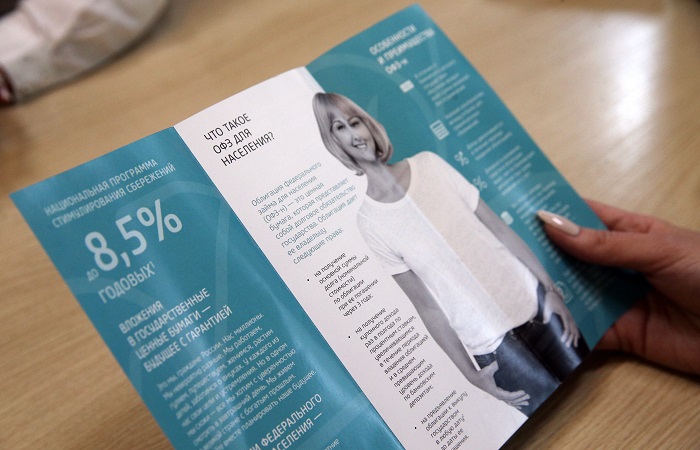 Moscow. April 26. New old tool of the Russian market of government bonds for the population collapse of demand from the point of view of the number of transactions in the first day of sales is not called. However, in monetary terms, the performance is quite decent: yet, according to the statistics of banks of operators, generate the main demand is not new, is alien to financial literacy, and quite wealthy citizens are familiar with the concept of “investment strategy”.

So, the citizens on the first day of sales of the debut issue of three-year Federal loan bonds to the public (BFL-n) N 53001RMFS acquired securities amounting to 696,807 million rubles, according to information from the Moscow exchange.

A total of 337 transactions.

The Finance Ministry on Wednesday began posting through the branches of VTB 24 and Sberbank OFZ-n total volume of 15 billion rubles (banks, divided among themselves the amount of 7.5 billion rubles). Thus, in the first day it was implemented 4,65% of the debut bond issue.

Sberbank said that just for the acquisition of OFZ-n to the end of the day have applied for about 1,000 customers of the Bank. Total volume of bids amounted to 912 million roubles at face value, the average size of bids at the moment – 900 rubles. While maintaining demand at current levels, Sberbank expects that its part of the issue – 7,5 billion roubles – it will be placed in the nearest month the number of clients can be tens of thousands.

VTB 24 has taken on the first day about 500 applications worth about 700 million rubles, the Bank said. The average order volume amounted to 1.4 million rubles. According to the Bank, 70% of the applicants were men, 30% women. A leading region in the number of complaints was Moscow and Moscow region – 37% of the total, in second place – St.-Petersburg and Leningrad region – 17%. This is followed by Samara (3,5%), Belgorod, Ufa and Kazan (3%), Stavropol and Cherepovets (2%). For the last week in the Bank’s call centre received more than 2,000 phone calls on the subject. VTB 24 plans to place OFZ at 7.5 billion rubles. less than six months and involve about 30 thousand clients.

Based on these agent banks according to the average level of the application, it can be concluded that the average size of a single application for both credit institutions amounted to 1 million rubles.

Earlier, presenting a new tool, the head of the Department of state debt and state financial assets of the Ministry of Finance of the Russian Federation Konstantin vyshkovsky said that the target audience OFZ-n – citizens with incomes below the average, not the owner of the financial theory, not possessing deep knowledge and understanding of the functioning of the financial market.

However, Finance Minister Anton Siluanov on Wednesday did not rule out that in the future, when subsequent editions, the amount of Bank fee might be reduced.

At too high a Commission drew the attention of and Advisor to the first Deputy Chairman of the Central Bank Sergey Moiseev. “1. Despite the fact that two officers struggled hard and it took me 1 hour and 20 minutes, although the documentary is not much different from the design of the contribution for 10 min. 2. A Commission of 1.5% on the background of normal brokerage fee in tenths of percentage, of course, look to non-market proposition, especially given the duopoly of the savings Bank and VTB” – he described his experience of purchasing new securities in the savings Bank Department. According to Moiseyev, the application procedure was “cumbersome”. “The application is written on paper and sent in a PDF (!) for later verification of the signature and correctness of filling, despite the presence of duplicate data in the school system,” he said. “Overall, the impression that the procedures are poorly thought out and has not been optimized. For 200-450 million of fee income banks looks certainly to weak. Despite all this, fans have bonds definitely will be,” concluded Moses.

According to Siluanov, depending on demand for the first issue of this year can be placed the second issue of OFZ-n at 15 billion rubles.

The minimum a citizen can buy for each order submitted to the agent, 30 bonds, the maximum it can hold 15 thousand bond. Existing Bank customers can apply online, new customers should visit the offices of VTB 24, where they provide investment services, or offices of “Sberbank Premier”.