“The greatest attention was paid to international issues,” — said Vladimir Putin at a press conference on the results of the first part of the negotiations with German Chancellor Angela Merkel in the residence “Bocharov Ruchey”. After the press conference, the negotiations continued, the main theme of the “worker’s Breakfast”, according to Merkel and Putin, will be the preparation of the summit of “Twenty” which will pass in July in Hamburg, chaired by the Chancellor of Germany.

Interlocutors in both delegations spoke about the importance of maintaining contact, the need for discussion of Ukraine, Syria and the agenda of the German presidency in the “Twenty”. The summit will be held in Hamburg in early July. The Chancellor ahead of the summit visited the leaders of some countries have already visited the USA, and in Russia, flew in from Saudi Arabia, where the conversation was also about the preparations for the summit.

Associate Professor, St. Petersburg state University Nikolai Vlasov, an expert on Russian-German relations, links the visit of Angela Merkel in Sochi with the impending parliamentary elections. “It has a great influence on the actions of the Chancellor, he said in an interview . — She needs to show voters political successes, including in the international arena”.

A short meeting with Putin in Sochi became part of the “marathon”, which included a trip to Brussels and a visit to Saudi Arabia, says the expert. These negotiations Merkel indicates that Germany plays a significant role in world politics.

However, the visit will not affect bilateral relations, expect a reboot and breakthroughs on the Ukrainian question is not, Vlasov concluded: “In fact, were confirmed by appropriate differences and the need for further dialogue — a standard formula in Russian-German relations in recent years”.

In the center of Ukraine

The main international topic was the Ukraine, follows from the statements of leaders. The situation there, according to Putin, “a matter of serious concern”. Merkel also expressed regret that the Minsk agreements are implemented very slowly and in talks all the time necessary to return to “zero point” — the need of ceasefire.

Both leaders stated that no alternative to the Minsk agreements and on the need to preserve the “Normandy format”. “You can’t put new plans without achieving the implementation of the earlier”, — said Putin. However, the plan of implementation of the agreements Putin and Merkel expressed different approaches. The Russian President spoke of the need for direct dialogue between Kiev and representatives of the breakaway republics, which will begin a political process. Merkel spoke of the need of the truce, Ukraine’s access to the part of the border with Russia, which is now not controlled by Kiev, after which it can begin the political process. Putin noted the limitations of the leadership in Kiev: “the Current authorities in Kiev have missed may be a chance to implement <…> political opportunities become less and already.” Merkel assured that the Ukrainian side “feels committed to the implementation of agreements.” For the implementation of the Minsk agreements, according to her, need a road map. This was discussed at the last summit of the “Normandy four”, but “map” has not yet been agreed. 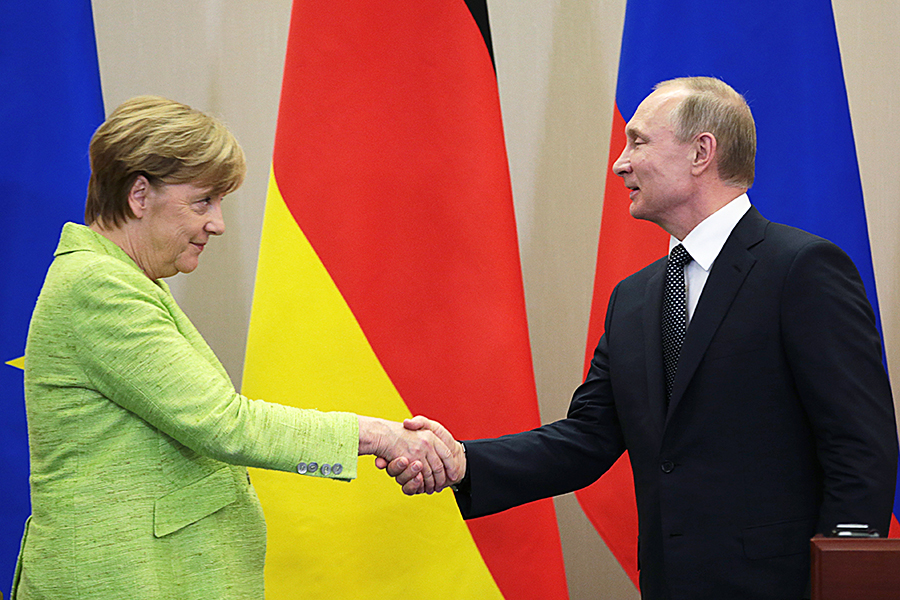 They argued that the leaders and the origins of the Ukrainian crisis. Putin reiterated his position: in 2014 took place in Kiev anti-constitutional coup. According to Merkel, the current Ukrainian government came to power in a democratic way.

Russia, however, continues to support Ukraine, Putin said, including continued deliveries of coal. Ukrainian authorities, according to him, divest themselves of the territory: withdraw the national currency, imposed a blockade. In these circumstances, the authorities LDNR entered external management at the Ukrainian enterprises, he said.

The economy is growing

Differences on many issues do not prevent Russia and Germany to trade successfully. Germany remains the leading trading partner, earlier this year recorded an increase in turnover, said Vladimir Putin. Germany is the largest consumer of Russian gas and is the first investment in the Russian economy, the volume of which is $16 billion, said the Russian President. Russia is ready to continue to build relationships based on mutual benefit, respect and equality, he said.

“We have noted an encouraging development in the field of Economics. Wish we could lift the sanctions if the Minsk agreements”, — said Merkel.

In 2016, the bilateral trade turnover has decreased by 11%, to $40.7 billion But at the beginning of the current growth seen in January—February increased by 43%, to $7.3 billion, compared with the same period last year.

Human rights are not forgotten

Discussed at negotiations and the subject of human rights. The Chancellor announced that he had asked the Russian President to intervene in the situation with the alleged persecution of LGBT people in Chechnya. “I talked about what was a very negative report about what is happening with homosexuals in Chechnya and asked the President that he had the influence to ensure the preservation of the rights of minorities”, — said the Chancellor. This is, according to her, refers to the organization of “Jehovah’s Witnesses”. The Supreme court of Russia declared extremist and banned the activity.

In response to the question of German journalists, the Russian President commented on the actions of Russian law enforcement bodies at rallies in Russian cities. Russian police, according to him, behave “more restrained” than their European counterparts. Putin cited the actions of the police in other countries where against the protesters “used batons and tear gas.”

Stefan Meister from the Council on international issues in Germany (DGAP), believes that Moscow and Berlin are unlikely to be able to restart the relationship. Ukraine remains a serious obstacle to this. Russia will not compromise, because it suits the current situation. “Moscow may expect that I will be able to strengthen their bargaining position after the elections in France and Germany,” he said in an interview . 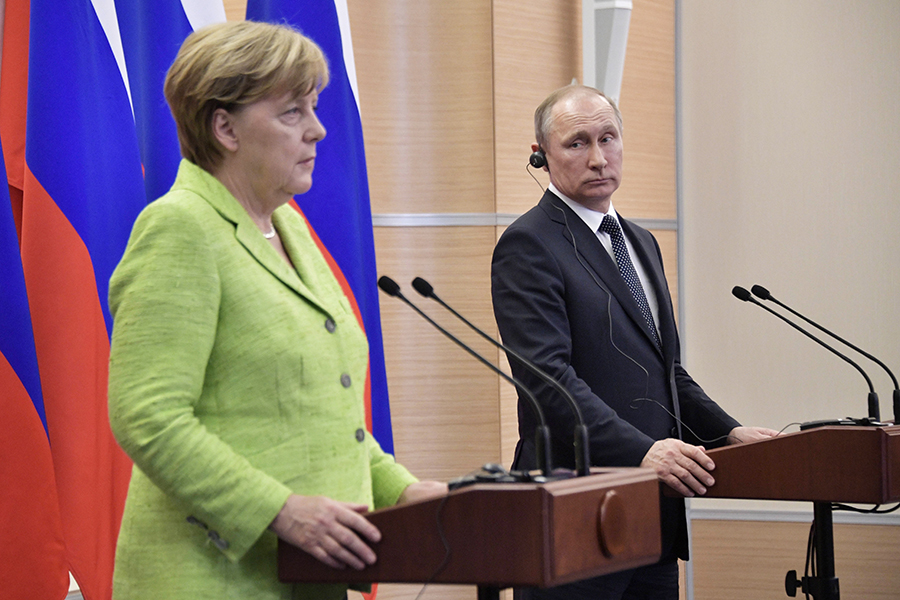 Merkel’s visit means that both parties are aware of the importance of dialogue. Moscow and Berlin should take a decision acceptable to all, said the expert. “For Merkel, it is important to show that although on some issues she can’t compromise (Ukraine, sanctions, Syria), it is interested in dialogue with Russia and that both sides are key economic and energy partners,” said Meister.

However, this visit does not mean that they will be able to resume the “Normandy format” negotiations on the conflict settlement in the Donbass, which besides Russia and Germany includes France and Ukraine. “For Moscow, the situation in the Donbass — the perfect, explained Meister. — Ukraine is weakened, the Russian government received from the Minsk agreements, everything I wanted. Why should anything else be done? Sanctions — a problem, but not so big to change its position.”

However Jacobine von Freitag, senior project Manager at analytical center of the Schneider Group, is confident that Merkel’s visit is a good sign for Russian-German relations. The expert hopes that the Sochi meeting will move forward the issue of compliance with the Minsk agreements and will help to solve disagreements on the Ukrainian issue. “But count on the lifting of sanctions in the coming time, still premature,” added von Freytag.