Venezuelan President Nicolas Maduro announced the convening of a constituent Assembly to overcome the deep political crisis in the country. Its decision the head of state said on Monday at the may day demonstration in the Venezuelan capital Caracas.

“I don’t want a civil war, declared Maduro. And so I call a meeting to achieve peace in our Republic, to suppress a fascist coup and to let our people to establish peace, harmony and national dialogue”. The timing of the convening of a meeting the President is not said, but noted that the task of the Assembly to write a new Constitution of Venezuela or to upgrade existing.

As noted by Pro-government Venezuelan TV station TeleSUR, funded by the government, the opposition criticized the decision Maduro, while in 2013, 55 well-known politicians signed a letter in support of the convening of a constituent Assembly to “change the lost legitimacy of the regime.”

So, the opposition leader and Governor of Miranda state Henrique Capriles has called calling the meeting “another constitutional fraud of the dictator Maduro”, urging citizens to go out to confront “such madness.” The speaker of the National Assembly, Julio Lopez compared the actions of the President with a coup, and his predecessor, Henry Ramos Allup said on Twitter that the constituent Assembly “is not constitutional, but rather prostituzione”.

None of the opposition leaders did not expect from the head of state such a radical step, as the convocation of the constituent Assembly, I am sure a leading researcher of the Institute of Latin American Academy of Sciences Emil Dabagyan. “Maduro decided to hijack the agenda and this sudden move to knock the cards out of the hands of the opposition”, — he explained .

Today Venezuela is in the acute phase of the protracted political crisis. Mass protests began in February 2014 with student demonstrations and has continued as a broad anti-government movement. The discontent of citizens cause not only high levels of crime and suppression of dissent by the authorities, but also economic problems: shortages, corruption, financial crisis.

The fall in oil prices that began in the summer of 2014 deepened the problems of the Venezuelan economy: according to OPEC, oil provides 95% of export revenues of the country and the entire oil and gas sector accounts for about 25% of Venezuela’s GDP. And if in 2014 the exports of Venezuela amounted to $80.7 billion, of which oil accounted for $77.8 billion, in 2015, the figures amounted to only $38 billion and $35.8 billion respectively.

The fall in export revenues had a strong pressure on the national currency. The official rate of the Bolivar to the U.S. dollar since February 2013 was 6.3 Bolivar per dollar, and in April 2016, the Central Bank devalued the currency to 10 bolivars per dollar. At the same time by February 2017 at the black market rate of the Bolivar has already reached 4.3 thousand per dollar. Real inflation for the year 2016, according to the consulting firm Ecoanalitica, amounted to 525%, in 2017 the IMF forecasts it at the level of 1640%.

Against the background of deteriorating socio-economic situation of the opposition MUD bloc won two-thirds of the seats in the parliamentary elections in December 2015 and October 2016, deputies launched impeachment proceedings Maduro. However, in January the Supreme court sided with the President, ordering the Parliament not to proceed with impeachment proceedings because it is “not envisaged by the Constitution”.

With new force protests broke out in early April, after the Supreme court initially dismissed the Parliament, but several days later reversed the decision. The most violent clashes took place in Caracas on 19 April, when three people were killed, over 200 injured, more than 500 were detained by police. 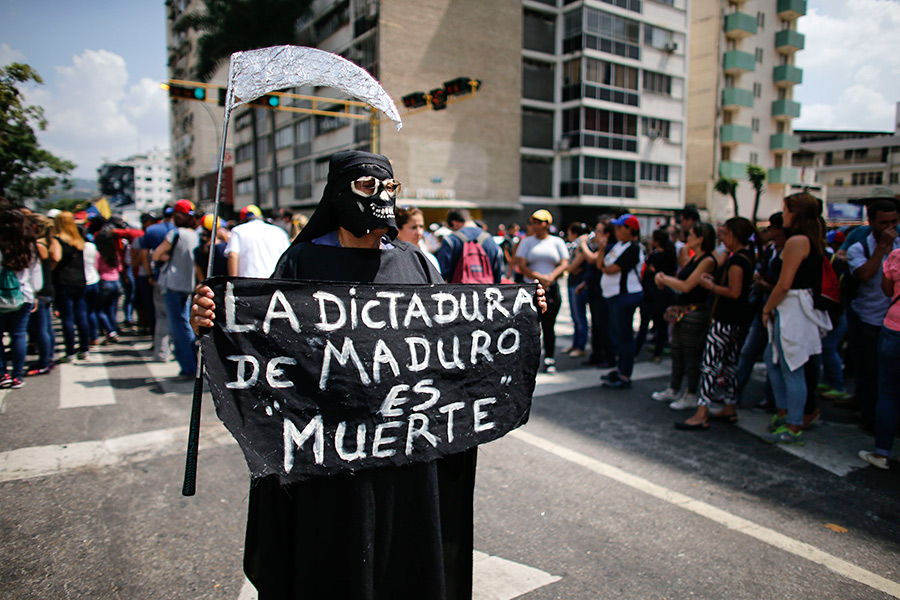 The preparations for the convening of the constituent Assembly held on the eve of regional and municipal elections. In the summer of 2017 across the country should pass elections of mayors and governors but the national electoral Commission has yet to set a date for a vote.

The analyst Luis Leon told the Associated Press that one of the reasons for the convocation of the constituent Assembly — this is just an attempt to postpone the regional elections on the grounds that large-scale constitutional reform, the writing of the new basic law. Dabagyan said that the regional elections should be held before the end of the year, but attention will be distracted by the work of the constituent Assembly is one of the tools of intercepting the agenda of the opposition.

Because constitutional reform is necessary as a means of transferring attention with the upcoming elections, which left the ruling bloc defeated (this perspective Maduro and calls a “fascist coup”. — ) I agree Professor, Central University of Venezuela Enrique Falcon. “From my point of view, the authorities are now in the terrifying situation where they just do not understand how they continue to use normal mechanisms such as regular elections,” Falcon told the newspaper the New York Times.

In October 2018 in Venezuela’s presidential election. In March of 2017 three leading parties in the opposition bloc MUD chose candidates who later will participate in vnutrizonovyh primaries. From the party “For justice” running for Governor Henrique Capriles, from the “Democratic action” — the former speaker of Parliament Henry Allup, from the “people’s will” party leader Leopoldo lópez.

While Lopez September 2015 is serving a sentence of 13 years and nine months in prison for “organizing mass riots”, and Capriles at the beginning of April for 15 years, was banned from holding elected office because of “administrative irregularities” during his work the Governor.

Despite the ban, Capriles continues to be led by the Miranda state and continues to call for mass demonstrations against Maduro. For example, the demonstration on April 19, dubbed the “Mother of all marches”, collected to 2.5 million people (according to the Agency RFI).

So now the public mood in Venezuela is radically different from 1999, when the last time was convened a constituent Assembly to draft a new Constitution of Venezuela, says Dabagyan. Then the coming to power of socialist Hugo Chavez has triggered a national enthusiasm, which the new government took.

In April 1999, the referendum to convene a constituent Assembly was supported by 92% of the population, and in July the elections in the meeting of the Pro-presidential bloc of left parties collected more than 65% of the vote. Finally, in December 72% of the citizens approved in a new referendum prepared in six months the new Constitution. Now, according to Dabagyan, the procedure of convening of the meeting to the end is not considered and the main purpose is only the disorientation of the opposition.