Russia took first place in the world “latte index”, which represents the value rating of the smallest Cup (“tall”) drink at Starbucks networks worldwide, according to a study by the American company ValuePenguin, specializing in the analysis of consumer expenditure. In their work, the experts used statistics from research company Euromonitor International, and Converter operating data of the world Bank.

The basis of the analysis of ValuePenguin took the basket value a wide range of products, including food, in 44 countries the presence of Starbucks, which was associated with the cost of a Cup of latte in these countries. Prices are taken as of January 2016. As a result, in Russia the purchasing power of money is needed to purchase a latte at the local Starbucks (the dollar value of the number of “baskets” that can be purchased instead of a Cup of specialty coffee), was the most expensive — $12,32.

In the US, Starbucks latte, on the contrary, the cheapest is $2,75. In the region of South-East Asia, the maximum cost of this product is $8. In Australia ($2,86), the UK (of$2.88) and New Zealand and Canada (both at $3,06) the price is more comparable to the us. But in countries such as India, Thailand, and Indonesia, buy a latte will be comparable to the cost of $7. 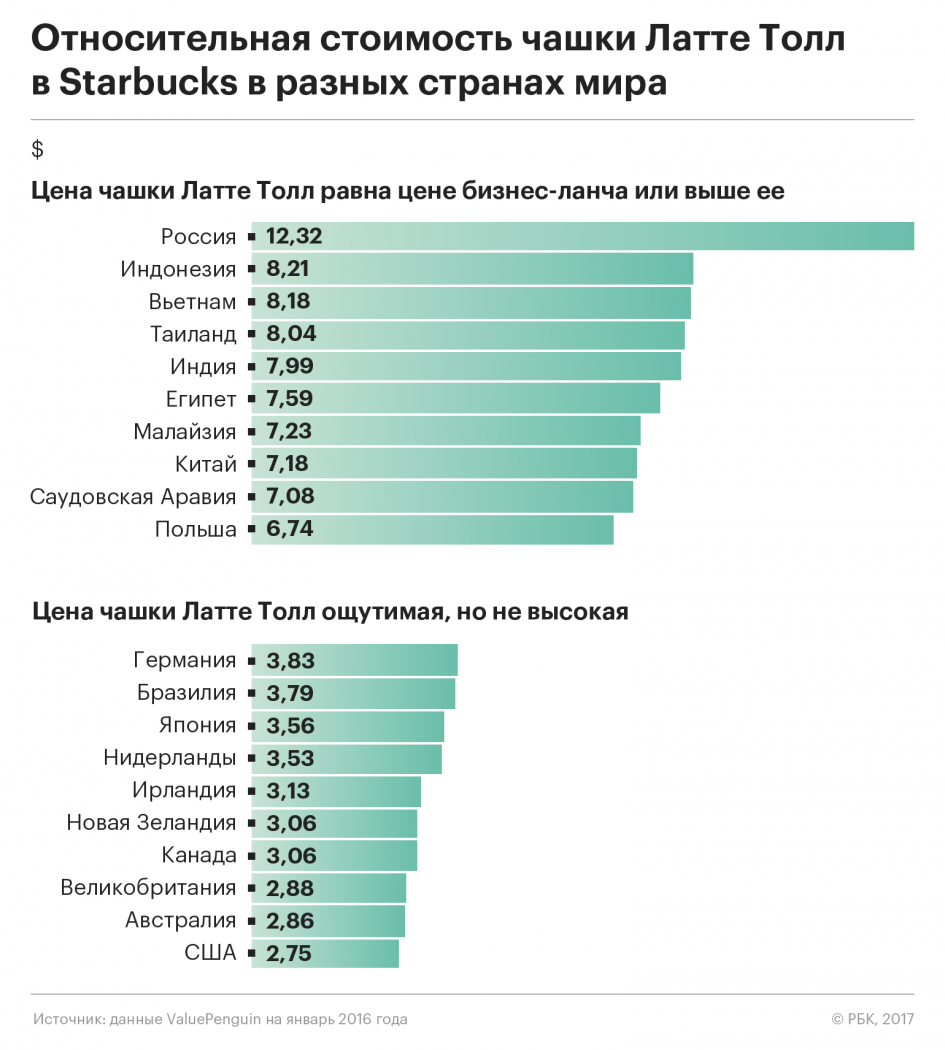 In fact, the study demonstrates how expensive Starbucks latte seems to the consumer in a particular country in the context of the real wages of this country and the cost of most sold in this country products, explained the editor-in-ValuePenguin consumer markets Paul Reynolds.

“The apparent high cost of a latte in some countries indicates the low cost of many products and services available in these countries. On the back of cheap bread, milk and similar commodities in these countries compared to USA the cost of coffee in them seems very high, and the trip to Starbucks — a great luxury,” the study says. The rating also explains why in some countries, the Starbucks “is considered an exotic and status coffee shop, embodying the prosperity of American society and self-indulgence as a lifestyle”, say the authors of the study.

At the beginning of March 2017 the cost of a Cup “latte tall” in Russian Starbucks was set at 255 rubles, or us $4.4 weighted average exchange rate for March, the official price list of the company. The network entered the Russian market in 2007.

According to General Director of the Russian Association of manufacturers of tea and coffee Ramaz Chanturia, the relative high cost of Starbucks coffee in Russia may be due to a number of factors. First, in Moscow the average cost of renting retail property is much higher than in other cities of Europe and the United States, and this pushes the prices up. Second, coffee is a fashion product, so the demand allows you to set the price higher than in other countries. Thirdly, now the coffee market is not yet saturated, which will keep the high prices, as the market will saturate and go into stagnation, will begin competition for the cost of a Cup. Finally, the high cost of coffee may be used to ensure profitability of the business if the owner decides expensive coffee to compensate for cheap snacks.

asked for comments in the Russian division of Starbucks, but have not yet received a response.