This year the Russians plan to increase the budget for the summer vacation. This is evidenced by the annual survey conducted by international travel metapoiskovikom momondo.ru. According to a survey of 2 thousand respondents aged 18 to 65 years from Moscow, St. Petersburg and large regional cities of Russia, experts of the portal found that 26% of Russians are going this year to spend on summer trip from 78 thousand to 156 thousand. 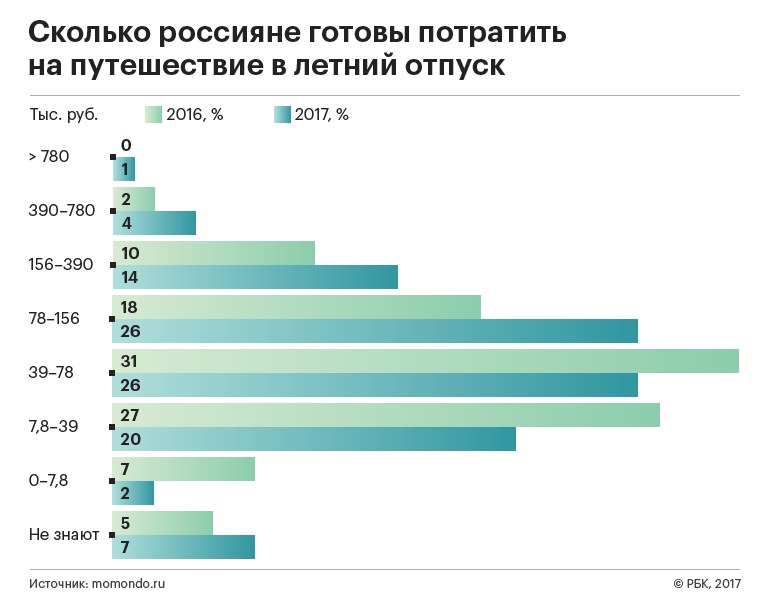 Stay in the new reality

“Russian tourists are used to the exchange rate and are willing to spend on vacation more than in previous years”, — commented the results of the study representative momondo in Russia Irina Riabovol. With it agrees the General Director of “Personal Advisor” Natalia Smirnova, who noted that currently, the dollar / ruble exchange rate is at a fairly attractive level — 57,8 RUB. last year at this time, the dollar was trading at 66,5 rubles per dollar. “In recent years, people have learned to live in the new reality, and save for a vacation,” she adds.

Also, according to Smirnova, the role played by the return of Turkey to the number of available tourist destinations for Russians. “Because Turkey is reopened, and the exchange rate relatively stable, people will often go out there on vacation,” — says financial adviser. It is important to understand that in recent years a trend has emerged to travel abroad only once a year, says independent financial adviser said Suleymanov. Previously, the Russians traveled abroad more frequently, believes the expert.

Executive Director of the Association of tour operators of Russia Maya Lomidze stressed that at present, activity in the tourist market of the country is not much above last year. “Now the volume of sales of summer tours — is, depending on the direction, plus or minus 5-10% of the sales in the same period in 2016,” — said Lomidze.

However, she admits that the tour operators have seen an unprecedented surge in activity during the early booking tours for the summer — in February-March this year. “On average, the number of bookings increased by 25% compared to the same period last year”, — says the expert. In its forecast, this year the number of tourists abroad will show a slight increase, and the volume of trips to Russia will remain at the same level.

According to research by momondo, 55% of Russians purposefully save money on summer vacation with his salary. Another 16% of respondents for travel take extra work, 11% contribute to in common with friends or family Fund, and 8% of respondents make a Bank consumer credit for the trip.

There are those who collects money for vacation, selling things online or at a flea market (7%) or just taking the required amount from relatives (7%). Some respondents are going to pay for a summer trip in installments (5%) or income from housing delivery in rent (3%). Citizens who can afford to take no special action to pay for a summer vacation, only about 24%. 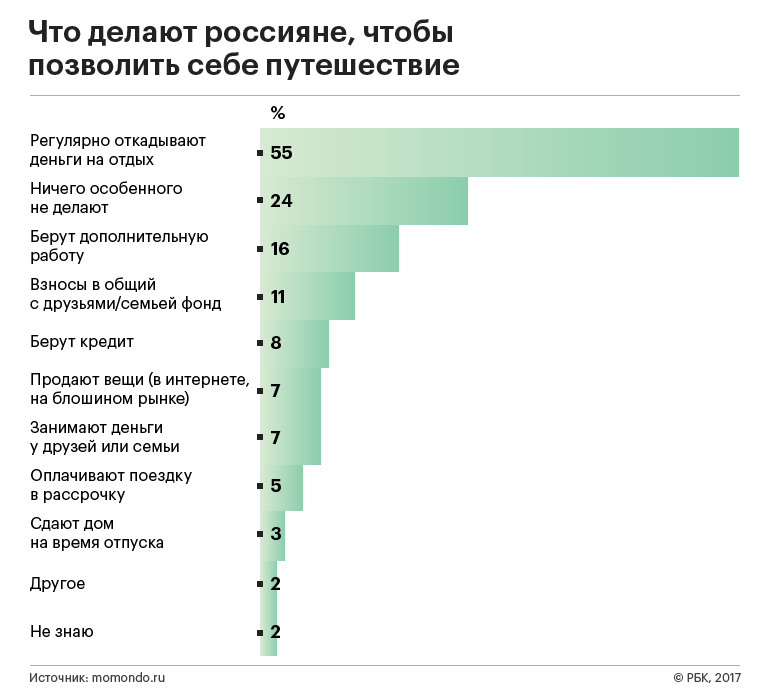 According to Irina Riabovol from momondo, the Russians remain among the most prudent of travelers. “Six out of ten Russians plan to advance at least a rough cost of the whole trip: from flights and accommodation to food and entertainment, on the spot,” she said.

With this conclusion agrees the Deputy Director of the Institute of financial planning Sergei Makarov. “Vacation — one of the most popular short-term life goals. People have always loved to take more work to have a good rest,” he says. The consultant also notes that Russians who are employed in large companies, often used to pay for travel irregular sources of income like bonuses and other payroll bonuses that are often paid in the spring.

How to save for a trip

Experts in the field of personal Finance, the respondents agree that to get credit for a vacation or to occupy for this purpose money from friends is an unjustified strategy. After giving the money will have future income that is not guaranteed — the borrower may lose the work, said Natalia Smirnova of “Personal adviser”.

“Vacation — thing completely planned. If you know when you go to rest and what amount you will need to spend on journey you can start saving in advance,” she explains. According to experts, the best option is to start putting money aside for a year before the planned trip. It is possible to resort to financial instruments and Bank deposits with possibility of replenishment and some bonds. “In the market there are a number of debt securities with a yield higher than on deposits. First of all, it releases some classic OFZ,” says Smirnov.

Sergei Makarov from the Institute of financial planning reminds you to save money on holidays abroad in the currency of the country which the tourist intends to visit. “This is best done uniformly throughout the year to avoid unpredictable exchange rate fluctuations”, — says the expert.

In turn, the financial consultant said Suleymanov proposes to issue a separate debit card or open a Bank account for the replenishment of the holiday budget. Using the settings for automatic transfer of funds from the payroll card on this account to resist the temptation to skip a contribution “holiday budget”. In addition, the Deposit holder will receive the interest income.

“The only negative — many deposits have a minimum down payment of 50 thousand rubles.”, — concludes the expert. Suleymanova also advises to pay attention to the cards with the bonuses and miles, which, depending on the client’s income can give a significant discount — for example, early booking of the hotel.