Overall quality of life in Moscow is higher than in most other major cities of the BRICS countries — Beijing, new Delhi and Sao Paulo, and even better than in Singapore, known for its developed infrastructure and an emphasis on high technology. To such conclusion analysts of Deutsche Bank, which has compiled a ranking of cities based on eight indicators: purchasing power, safety, quality of healthcare, cost of living, the ratio of property prices to income, transport, pollution and climate. But the Russian capital in the bypassed Shanghai, Johannesburg, Istanbul and Mexico city where much cheaper housing and better weather; overall, of the 47 cities, Moscow ranked only 38th place, according to a study (have).

The composite index of quality of life is a new element of the annual survey by Deutsche Bank on the prices of products and services in the world Mapping the World’s Prices.

Out of the eight indicators the highest position Moscow took on the cheapness of life (the total value of consumer goods), being in 12th place out of 47 possible. Worst of all the Russian capital the situation with the quality of health care (43 out of 47), experts say. In addition, Moscow has taken the fourth place in the top ten on indicators such as transport situation (including travelling to work and back), the purchasing power of the population, housing affordability (ratio of property prices to income of the population) and the attractiveness of the climate.

The level of security of the Russian capital was in the middle of the rankings — to 23rd place on the level of pollution — on the 29th. the safest city — Singapore, data from Deutsche Bank, but there is a very unfavorable climate (worse only in Kuala Lumpur) and expensive goods and property. As a result, Moscow on the General quality of life around Singapore on one line.

The study of Deutsche Bank used research data portal Numbeo. This crowdsourcing resource positioned itself as the world’s largest database, which is generated on the basis of information from customers from different cities and countries around the world.

The best cities in the world, Deutsche Bank recognized the capital of New Zealand Wellington Scottish and Edinburgh, and on the third place is Vienna.

In the course of work on the rating analysts expelled from the system estimates such indicators as forms of informal communication and ways of entertainment, for access to which many residents of the city prefer to put up with the commotion of city life. Often cities offer distinct advantages to which ordinary people aspire to, being willing to tolerate the deterioration of quality of life, according to the study. 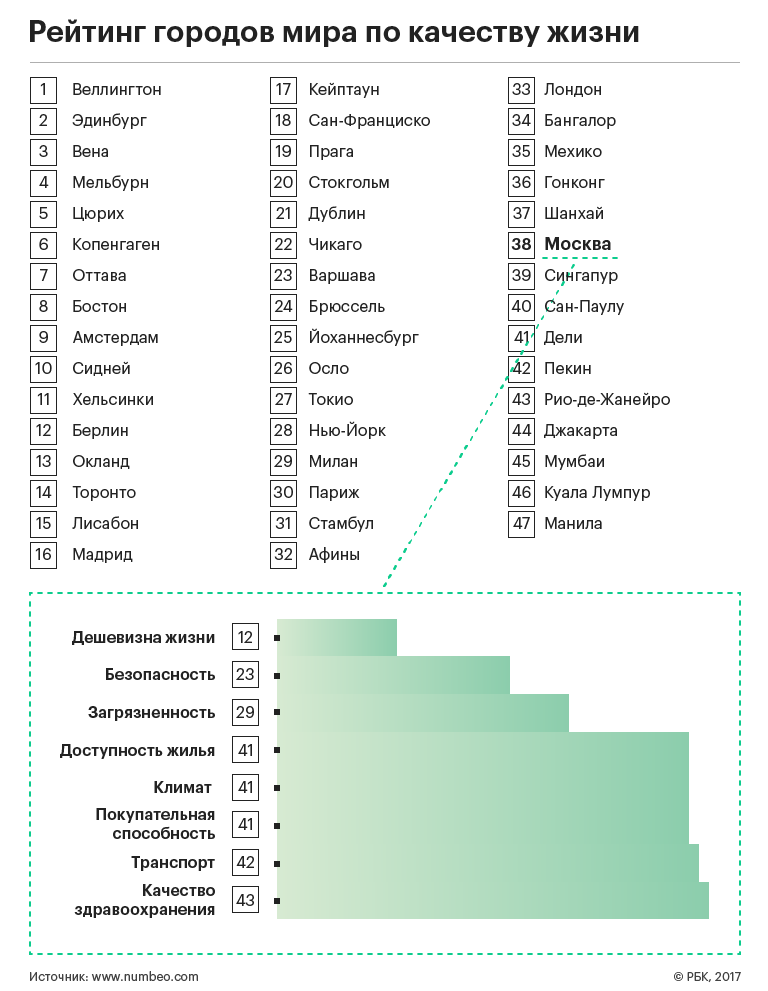 Public transport in Moscow, one of the most accessible in the world, follows from the study. Most expensive monthly pass him to the Russian capital is on the 35th place with $34,8 (for 2017). Cheaper travel costs in Athens, Shanghai, Warsaw, Cape town, Mexico city and new Delhi.

Memberships at gyms in the business districts of the city in Moscow, one of the world’s most expensive ($84,8). More concern about the physical form of costs to residents of cities such as San Francisco, Hong Kong, new York and Tokyo. The tickets to Moscow cinemas – quite affordable compared to other cities. In 2017, the price reached us $7.2. Cheaper than going to the movies will cost Prague, Warsaw, new Delhi and Mexico city. Standard men’s haircut costs the residents of Moscow in the areas inhabited by expats a little more than $20 is an average price for the world’s major cities. Cheaper cut in Milan, Dublin, Prague, Madrid and Warsaw.

In the top of the value of harmful habits Russian capital was on the 33rd place with $29. This is the sum of DB analysts evaluated the harmful set, in which they included five bottles of beer and two packs of cigarettes. Most expensive beer Moscow in 2017, took 24th place with $5 for a mug with a volume of 0.5 liters. Cheaper drinks are available to purchase in cities such as Amsterdam ($4,8), Frankfurt (us$3.8), Berlin ($3,6), Warsaw ($2,3) and Prague (us$1.3). A pack of Marlboro in Moscow is one of the cheapest among global cities. It costs the capital’s smokers $2; cheaper than in Manila ($1.5) and Jakarta (us$1.6). In Melbourne and Sydney pack of these cigarettes will cost $20.7 and $19,2, respectively.