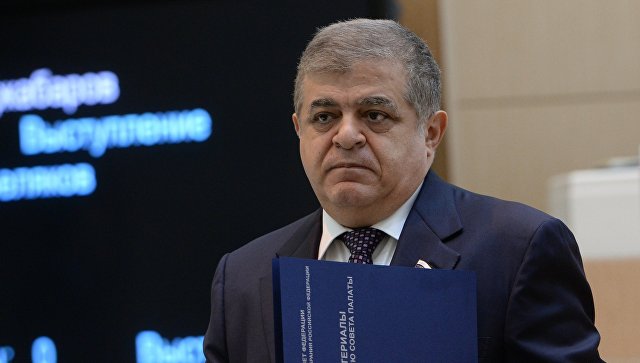 MOSCOW, may 4 — RIA Novosti. Russia will enter the mirror measures, control of all movements of American diplomats in the country in case of similar actions against Russian diplomats, said RIA Novosti, first Deputy Chairman of the Federation Council Committee on international Affairs Vladimir Jabbarov.

The house of representatives of the U.S. Congress earlier approved a bill to strengthen control over the movement of Russian diplomats before the end of the current fiscal year — until September 30. One of the provisions included in the draft budget for the remainder of the 2017 financial year, says that us Secretary of state in consultation with the Director of FBI and Director of national intelligence should enforce mode notice, which applies to all travel of accredited diplomats and consular personnel of Russia.

“If this practice is adopted in the United States, on the basis of the principle of reciprocity, Russia will be no less carefully keep track of all visits and travel of American diplomats in our country” — said dzhabarov.

The Senator said that before, in the 1980-ies, this practice existed in almost all countries of the world.

“But this does not mean that the movement of our diplomats in the United States today do not follow. Counterintelligence there does that all the time, just don’t advertise it,” — he explained.

In this regard, dzhabarov urged not to dramatize the events.

“Yes, it is a continuation of the General line for a psychosis on the part of American politicians: we, our diplomats are once again trying to imagine the devil incarnate. But to exaggerate the importance of this decision is not necessary, it’s just regrettable,” — said the MP.