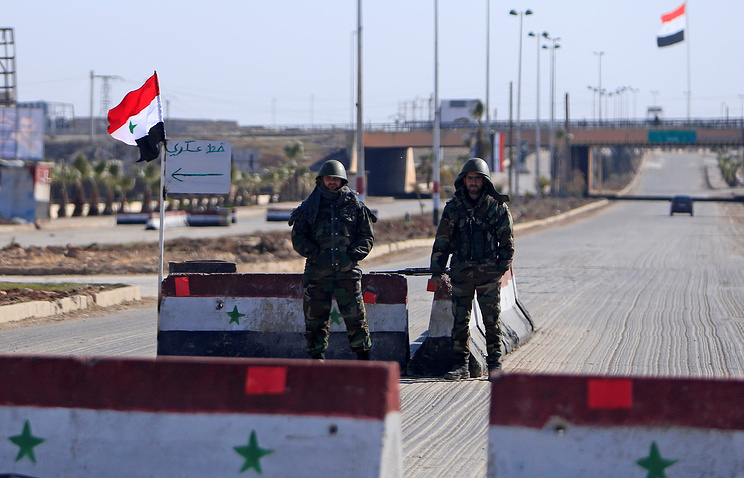 MOSCOW, may 5. /TASS/. Memorandum on the establishment of a de-escalation in Syria was prepared by the defense Ministry on the direct instructions of Russian President Vladimir Putin. This was announced by Deputy Minister of defense Lieutenant-General Alexander Fomin.

The results of the negotiations that took place over two days in the capital of Kazakhstan, the Plenipotentiary representatives of Russia, Iran and Turkey Memorandum on the establishment of a de-escalation in Syria.

“The document was prepared by the Ministry of defense of Russia on direct orders of the Supreme commander of the Armed forces of the Russian Federation Vladimir Putin to consolidate the cessation of hostilities in Syria,” – said Fomin.

Putin’s talks with the US and Turkey

The chief of the Main operations Directorate of the General staff of the Russian Armed forces Colonel-General Sergey rudskoy, in turn, said that the adoption of the Memorandum was preceded by a series of talks between Putin and the leadership of the USA, Turkey and other States and Russian defense Minister Sergei Shoigu the military-political leadership of Turkey and Iran.

“The adoption of the document was preceded by a thorough preparatory work with all participants of the negotiation process. The issues of political settlement in Syria has been discussed by the President of the Russian Federation with the leaders of Turkey, USA and other countries,” said Armenian President.

He noted that, in particular, the question about areas of de-escalation were discussed during the talks the leaders of Russia and Turkey on may 3 in Sochi.

“A lot of work with the Syrian leadership and the leaders of the armed opposition groups to convince them of the need for practical steps to de – escalate the conflict,” he said.

Support of Memorandum in other countries

Deputy Minister of defence of the Russian Federation Alexander Fomin also said that the signing of the document was supported by the major players: UN, US administration, the leadership of Saudi Arabia and other countries that, in the words of Lieutenant General, is “a certain guarantee of its implementation”.

“A positive value in establishing areas of de-escalation was the position of the United States, welcomed the steps to reduce the violence in Syria to improve the humanitarian situation and creating conditions for a political settlement of the conflict”, – said Fomin.

He also said that an important role in the operational preparation of the Memorandum signing has played a constructive attitude of Iran and Turkey who supported the idea of strengthening the cease of hostilities.

With regard to the position of the UN, according to Fomin, the signing of the document was supported by the Secretary General of the organization, antónio Guterres, who welcomed the decision to discontinue the use of weapons and to empower the humanitarian support of the population.

The separation of terrorists from the opposition

Fomin also said that the Memorandum will allow to separate the opposition from the terrorists and will contribute to the cessation of hostilities.

“The Memorandum is a landmark document, the implementation of which will allow on the ground to separate the opposition from international terrorist groups ISIS (the former name of the terrorist group “Islamic state”, IG) and “jabhat an-nusra (the prohibited group in the Russian Federation)”, – he said.

“But most importantly, the implementation of the Memorandum will allow to cease the hostilities of the conflicting parties and, in fact, to stop the civil war in Syria,” he added.

According to Fomin, with the signing of the Memorandum will be provided for safe, unhindered humanitarian access in zones of de-escalation, that will allow to provide the population with medical, food and other necessary assistance. “It will be orderly restoration of infrastructure, primarily water and energy. All this will create conditions for safe, voluntary return of refugees and internally displaced persons,” – said Fomin.

“That is why the paper is important for a political settlement in the Syrian Arab Republic,” he added.

The guarantor countries of the armistice

Fomin also said that the countries – guarantors of the truce in Syria can join Jordan and some other countries.

“Yes, provided. At the moment we are working with Jordan and several other States”, – he told, answering a question about the possibility of increasing the number of participants for the establishment of areas of de-escalation.

Currently the guarantor countries were Russia, Turkey and Iran.

Memorandum on areas of de-escalation

Zone of de-escalation will be established in four districts of Syria. It’s Idlib province and parts of neighboring provinces (Aleppo, Lattakia and Hama), the area to the North of HOMS, the Damascus suburb of Eastern ghouta and a number of provinces in southern Syria – daraa and Quneitra. At the boundaries of the areas of tension reduction organize a security zone where to set the checkpoint for the passage of civilians and humanitarian assistance and monitoring points for the ceasefire.

The MOU covers six months with the possibility of automatic renewal for the same period. As noted by the special representative of the President of the Russian Federation on the Syrian settlement, Alexander Lavrentiev, the document may get “unlimited sound”.