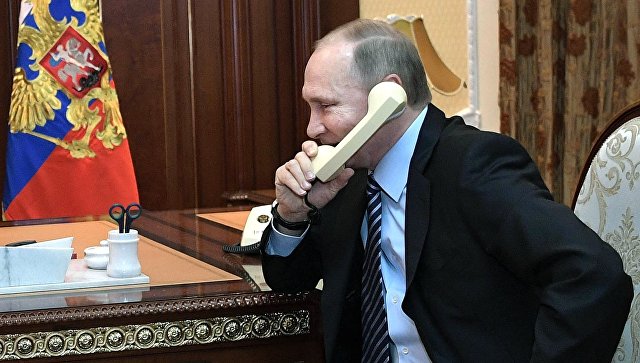 MOSCOW, 5 may — RIA Novosti. The presidents of Russia and Kazakhstan Vladimir Putin and Nursultan Nazarbayev discussed the results of the fourth meeting on Syria in Astana, which was held may 3-4, they expressed satisfaction with the adoption in Astana of the Memorandum on the establishment of a de-escalation in Syria and noted that the implementation of the Memorandum contributes to the strengthening of the ceasefire, said on Friday the press-service of the Kremlin.

“Today had a telephone conversation with President of the Russian Federation Vladimir Putin with President of Kazakhstan Nursultan Nazarbayev. When discussing the results held on 3-4 may this year in Astana a IV International meeting on Syria, expressed satisfaction at the adoption of the Memorandum on the establishment of a de-escalation. Noted that its implementation by all parties will contribute to the strengthening of the cessation of hostilities, to improve the humanitarian situation and the overall political settlement of the Syrian crisis”, — stated in the message.

Putin and Nazarbayev also discussed a number of topical issues of bilateral cooperation, including the schedule of upcoming contacts at various levels.