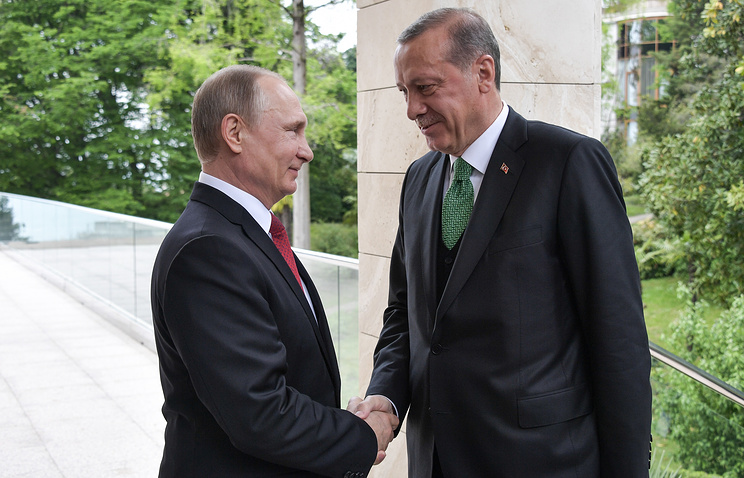 SOCHI, may 3. /TASS/. The President of Russia Vladimir Putin considers that the period of restoration of relations between Russia and Turkey after the crisis finished, they returned to normal.

“Some time ago, our bilateral relations (Russia and Turkey) took the test of strength, – said the head of state at a press conference following talks with Turkish President Recep Tayyip Erdogan. Now it’s safe to say that the recovery period in Russian-Turkish relations is complete, we return to the normal partnership”.

“Turkey is an important and promising partner of Russia”, – said the Russian leader. According to him, Russia and Turkey are determined to further strengthen multifaceted cooperation in accordance with the Agreement on the fundamentals of bilateral relations, which in late may is 25 years.

The removal of barriers to trade

Putin also said that he discussed with Erdogan the issues of the removal of restrictions and barriers to trade, the parties touched upon the possibility of transition to settlements in national currencies.

“Special attention was paid (in the talks with Erdogan), the interaction in the economic sphere, the removal of restrictions and barriers to the expansion of trade and investment exchanges touched upon the possibility of transfer of mutual settlements in national currency”, – he said.

“It is important that managed to stop the decline of bilateral trade in the first months of this year was recorded a small increase in turnover of around 3%,” – stated Putin. According to him, they and Erdogan had agreed to accelerate the preparation of the agreement on services and investment, as well as to complete the formation of a joint investment Fund worth up to $1 billion.

One of the topics discussed was energy. The Russian leader recalled the work on construction of a new gas pipeline “Turkish stream”. “Its implementation will allow to significantly strengthen the energy security of Turkey and Europe, to expand the possibility of Russia on export of gas”, – said the Russian leader. They also discussed the construction of Turkish NPP “Akkuyu”, which is estimated at $22 billion.

Russia and Turkey have agreed on a comprehensive solution of issues of restrictions in economic relations between the two countries, Putin said.

“You asked when you can say that the limitations that arose some time ago, cut. It can be said today. We agreed on a comprehensive solution of all these problems associated with restrictions. We believe that any restrictions destroy the economy, harm the end up our producers,” – said Putin.

Specific restrictions in the relations of Russia and Turkey, for example, the supply of tomatoes to the Russian market, will remain due to objective reasons and will be removed with time, said the Russian President.

Answering the question of a Turkish journalist whether Russia to give a clear answer when they lifted all restrictions in bilateral relations, Putin noted: “We always say loud and clear, other language we do not exist”. In fact, the question the Russian President recalled that the restrictions against Turkey was imposed by Russia “after the tragic incident with our pilot.” “We all regret it, we see how Turkey and regrets it. But it happened, there were limitations,” he said.

According to the Russian leader, after the ban on the supply of tomatoes and other agricultural products from Turkey to Russia domestic farmers took out loans to develop their production in this area, which they must recoup. “It (the repayment of the loan and profit) a cycle associated with time, with sales”, – said Putin. He acknowledged that the Turkish tomatoes are cheaper than the Russian “we are interested that our consumer got a cheaper product.” “But we are also interested in the fact that the agricultural sector of Russia has developed, and those who took out loans under government guarantees were not left with nothing,” – said the Russian leader.

“We agreed today that this cycle once complete, we will let you know about it, it’s easy to count, this counting position”, – concluded the President of the Russian Federation. In addition, he continued, at certain times of the year Russia can not meet the needs of its market own production and purchases of goods, including tomatoes, imported. “Today we agreed that as we buy imports at certain times of the year, and our Turkish partners and friends should also not be discriminated against, they will be the same as any of our shops to work in our market”, – concluded Putin

The safety of tourists

Putin stressed the fundamental importance of ensuring the safety of tourists from Russia to Turkey.

“In the may holidays a third of Russian tourists who went abroad to rest, chose Turkey, said the Russian head of state. – Therefore, it is crucial to ensure reliable security of the Russian citizens on the Turkish resort”. “Russian relevant agencies are ready to provide the Turkish intelligence services to cooperate fully in such matters.”

Speaking about the cooperation in the humanitarian sphere, Putin recalled that in 2019 it is planned to hold cross-Years of culture and tourism of the Russian Federation and Turkey.

The President also noted that Russia is ready to soften the visa regime for certain categories of Turkish citizens, but we need to improve anti-terrorist cooperation between intelligence services.

“We need to improve the cooperation between our intelligence services in connection with the terrorist threat,” the Russian leader said, answering a question of journalists on prospects of liberalization of the visa regime between Russia and Turkey. “But we understand that there is a category of Turkish citizens who are constantly on business in Russia and we are ready to introduce a special, much more liberal regime than for all other citizens visiting our country,” Putin continued, noting that this requires a corresponding exchange of lists between the foreign ministries of Russia and Turkey.

“We have to make this decision ready”, – concluded the President of the Russian Federation, stressing that the situation with the visa regime “might look much softer than she now is the place to be.”