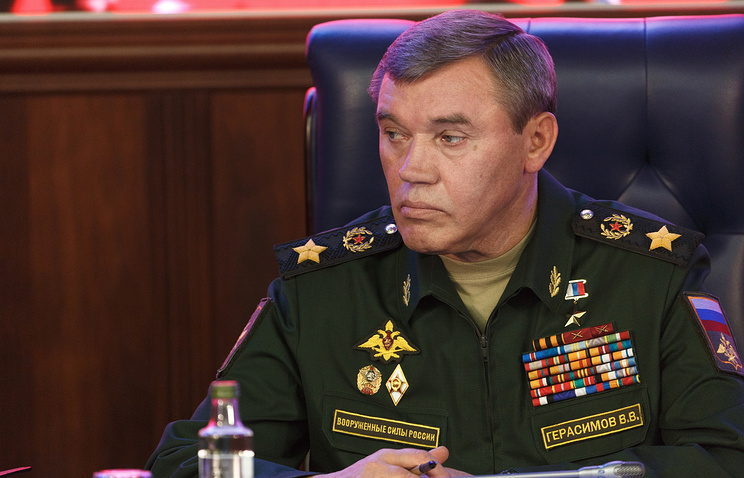 MOSCOW, may 6. /TASS/. The chief of the Russian General staff Valery Gerasimov and Chairman of the us chiefs of staff (JCS) Joseph Dunford in the framework of a telephone conversation on Saturday reaffirmed their readiness to fully restore the implementation of commitments in the framework of the Memorandum on safety of flights over Syria and work on additional measures to prevent conflict situations. This was reported in the defense Ministry.

“The focus was the situation in Syria in the context of the agreements reached on may 4 this year in Astana on the establishment of a de-escalation of the conflict in certain areas of Syria. The participants expressed readiness to restore in full the parties ‘ obligations in accordance with the Russian-American Memorandum on security and the prevention of incidents in the airspace of Syria, and to continue to work on additional measures to prevent conflict situations in the conduct of operations against ISIL (former name “Islamic state” – approx. TASS) and “Dzhebhat-EN-Nusra (banned group in the Russian Federation)”, – stated in the message Department.

“The two sides agreed to continue regular contacts”, – concluded the Ministry of defence.

At the same time, the press Secretary of the Chairman of the joint chiefs of staff Gregory Hicks confirmed that the parties discussed in Astana signed the agreement and expressed their commitment to the operations to eliminate conflict in Syria.

As previously reported, delegations of Russia, Iran and Turkey during the talks in Astana agreed on the establishment of four zones of de-escalation in Syria. The agreement provides that from may 6 in these zones, a ban on military activity, including aviation. The instrument is designed for six months and may automatically be renewed for the same period. The Russian defense Ministry previously said that the signing of the agreement in Astana not mean abandoning the fight against terrorist groups “Islamic state” and “Dzhebhat EN Nusra.”