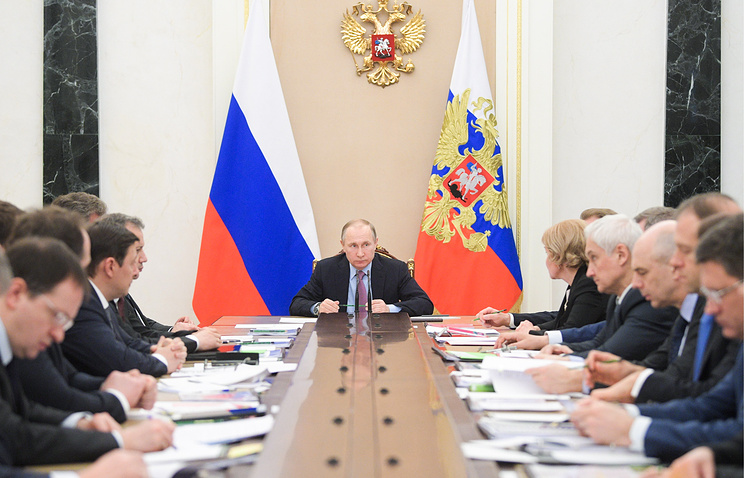 MOSCOW, may 4. /TASS/. The Russian government has published on its website information on the outcome of the “may decrees” of the President from 2012 in 11 areas of economic, social, defense and public policy.

Relevant agencies cited in the report indicators of its work on the development of Federal laws and normative acts, and statistical data for specific areas.

4 may the President of Russia Vladimir Putin will hold in the Kremlin a joint meeting of the State Council and the Commission on monitoring of achievement of target indicators socially-economic development of the country. The Commission was formed to monitor the implementation of the objectives of the “may decrees” of the President in 2012. Discussion will be on the three clusters of issues: the provision of public and municipal services through a network of MFCS (multifunction centers), independent assessment of the quality of social services and the resettlement of citizens from emergency housing.

The economy and housing

The government notes the report on the execution of the decree “On long-term state economic policy”, over the years have adopted a number of Federal laws and legal acts directed on maintenance of strategic planning.

“In the framework of implementation of “road maps” national entrepreneurial initiative aimed at reducing the number of administrative procedures and increase the quality of state regulation in the field of construction, customs administration, access to electricity, property registration, export support, valuation, tax administration, adopted 88 of Federal laws and more than 470 legal acts”, – stated in the message.

In the framework of the decree “On measures to ensure Russian citizens affordable and comfortable housing and improve the quality of housing and communal services”, the government adopted a package of relevant background documents.

According to information on the status of implementation of the presidential decree on state policy in the sphere of health, for the 12 months 2016, the death rate in Russia has decreased in comparison with the same period of 2015. In 2016 year, there were 14 import-substituting drugs, opened 16 new pharmaceutical plants, production of medicines increased by 23.75%.

The birth rate last year in Russia decreased by 2.3% compared with year 2015, the Cabinet continues to work on stimulating measures in this field. “First of all, it is the parent (family) capital, the monthly monetary payment for the third child, the regional maternity capital, the free provision of land plots to families with three or more children for individual housing construction, the increase in the number of places in kindergartens,” – he reminded the government.

In the field of education and science, the increase in the funding for fundamental research from the state.

In the framework of the execution of the decree on state social policy as of 19 April 2017, the Ministry of labor has approved 1004 professional standard. From 1 January 2015 introduced a new procedure for the formation of citizens ‘ pension rights and pension in the compulsory pension insurance system, involving the transition to the formation of pension rights in relative terms (pension rates).

The army and the defense industry

The government also reported on the implementation of “may decrees” of the President on improving the military service, as well as the development of the Armed forces and the modernization of the military-industrial complex. According to the report of the Cabinet, as at 7 April 2017 completed 12 assignments.

In particular, as noted in the document that created the concept design, implementation and development of the system of managing the entire lifecycle of weapons, military and special equipment, approved by the Military-industrial Commission under the government. The organizations of the defense industry are implementing seven pilot projects for the establishment of a system for managing the entire life cycle of a number of samples of weapons and equipment. Established in 2012, the advanced research Foundation has completed work on 12 projects, 52 contracts were signed for their implementation.

“These projects are aimed at establishing key elements of armament, military and special equipment of new generation, which will be the basis of the domestic system of arms at the turn of 2025-2030. In the framework of GEF projects 69 received results of intellectual activity”, – noted in the Cabinet.

In addition, in accordance with the President’s decision to increase the number of contract servicemen, as of 1 January 2017 stocked 383,8 thousand military posts.

The government in its report notes that in the course of improvement of state control were adopted a number of laws to improve the quality of public services and the expansion of the MFC. “Currently, services for real estate registration, registration by place of residence, services in the field of migration control in the DCP is available practically in all territory of the Russian Federation”, – the document says.

According to the monitoring of the development of the MPs network, as of March 1, 2017 on the territory of the Russian Federation was established 2777 MFC, 10214 geographically separate structural units, 312 offices on the basis of the involved organisations. Them nationwide there are over 33 thousand universal experts.

At the end of 2016 was adopted the state program “Implementation of state national policy”. Total expenditure of Federal budget funds for its implementation by 2025 will amount to 25,98 billion rubles, including in 2017 – 2,499 billion.

“The state program will be the benchmark for the Russian regions in development of regional state programs and will be adjusted according to the results of its implementation taking into account the dynamics of social, economic and ethno-cultural processes,” the report says.