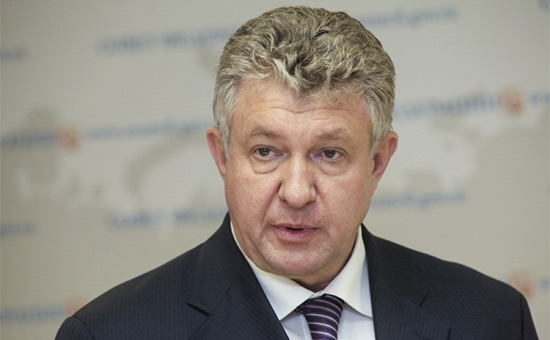 The CEO of the company “Vneshtorgservis”, which covers several Ukrainian enterprises in the DNI and LC, is a former Vice-Governor of the Irkutsk region Vladimir Pashkov, writes the magazine “Kommersant-Vlast”

The CEO of the company that controls the Ukrainian enterprises in the breakaway DND and LNR, is a former Vice-Governor of the Irkutsk region Vladimir Pashkov. This writes the magazine “Kommersant-Vlast”.

We are talking about the company “Vneshtorgservis”. In early April, the head of the DND Alexander Zakharchenko has signed a decree in which “temporary administrator” of the Ukrainian factories on the territory of the breakaway republics were appointed by this organization. In the list of enterprises, which controls the “Vneshtorgservis” are metallurgical plant “Donetskstal”, yenakiieve and Makiivka metallurgical plants, “Enakievo koksohimprom”, yasinovskiy coke plant, nusenkis ‘ makiyivkoks, Khartsyzsk pipe plant.

The publication indicates that over the past month “Vneshtorgservis” there have been no website, no office.

“None of the documents of the breakaway republics was not specified who heads this company and to whom it belongs”, — says “Kommersant-Vlast”.

But as the magazine notes, the name of the probable General Director of the company was mentioned. In the message Krasnodon territorial organization of trade Union of coal industry workers to the workers of local company “Krasnodonugol” March 20 stated that “Vneshtorgservis” will join coal mines and steel mills.

“It is proposed to build a vertically integrated company, which will operate in the territory of LNR and DNR. The company’s CEO is Vladimir Pashkov,” — reports the edition.

To receive the comment at the Pashkov magazine failed, although he initially agreed to an interview. However, it did not take place, because he either did not respond to calls or said that is at the meeting and did not call back later.

The Minister of industry and trade of the DNI Alexei Granovsky confirmed to the publication that “Vneshtorgservis” run by a man named Vladimir Pashkov, who has Russian citizenship.

“Prior to that, he was adviser to the President on economic issues, and who is behind them, we will not disclose so as not to harm our partners,” said Granovsky.

He refused to answer when asked what kind of partners are we talking about, saying that the DNI only “one partner — the Russian Federation”.

According to a former member of Parliament and former candidate in presidents of Ukraine Oleg Tsarev, for the “Vneshtorgservis” is the businessman Sergey Kurchenko, writes the edition. This was confirmed by the magazine and working Yenakiyevo steel plant, Khartsyzsk pipe plant and a coal-mining enterprise “Ordzhonikidzeugol”. According to them, the control over enterprises was transferred to the businessman.

The publication also notes that after a career of official Pashkov became the President of the charitable Foundation of support for international humanitarian projects, which was registered in Moscow in December 2015. In mid-February, the security Service of Ukraine has accused Pashkov that the Fund used to increase the budget of the LC. The report noted that in the first quarter of 2017 budget of the breakaway Republic needs to grow at more than 11 billion rubles. thus, according to the SBU, the power of LC can list only 2 billion rubles, and the remaining amount is planned in the form of receiving financial assistance from the government of Russia.

“To conceal the Russian Finance psevdorespubliki and to avoid further economic sanctions against Russia, one of the mechanisms of filling of the budget of the terrorists elected to pocket charitable Foundation of support for international humanitarian projects (the President — a citizen of Russia Vladimir I. Pashkov)”, — stated in the message.

The founder of the Foundation were the international settlement Bank of South Ossetia, “Kommersant-Vlast”. From 2015, this financial institution is cooperating with the authorities LNR as a correspondent Bank. The former trade Minister of South Ossetia Vadim Sedan in 2015 was Chairman of the International Bank of Donetsk and Luhansk banks in South Ossetia. Commenting on the magazine link with the “Vneshtorgservis” he said that he needed to “agree on the answers to such questions, to give only verified information.” A few days later he refused to comment on the data.

The authorities DND and LNR have entered external management at the Ukrainian enterprises on March 1. The head of DNR Alexander Zakharchenko explained that under the external control of the DNI moved about 40 companies.