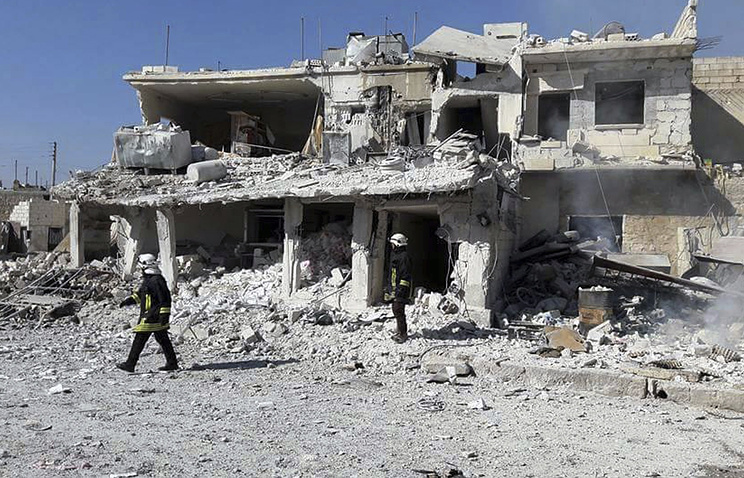 HAMIM /Syria/ may 6. /TASS/. Staging the effects of shelling and airstrikes took place in Syria last week with the participation of operators, filming scenes for the TV channel Al Jazeera, according to the Russian Center for reconciliation.

“According to several sources from local residents and opposition forces, n. p Sarakeb and Jisr-EA-Shugur special “videomagazine” during the past week was spent staging the alleged consequences of attacks and air strikes, including with the use of “toxic substances”. Among the “consultants” at “videosread” local residents were identified cameramen involved in the filming of video news in the region for Al Jazeera TV channel, – is spoken in the message.

As highlighted in the report, Russian experts support “the necessary contacts to the exclusion of any terrorist provocation” aimed at disrupting the execution of the Memorandum.

Informed military-diplomatic source that the stringers of the channel made a production shot another alleged use of chemical weapons by the Syrian army, which will be distributed to Sunday, may 7. In productions were involved in about 70 residents of the province of Idlib with children brought from refugee camps. For participation in the filming of them paid a thousand Syrian pounds and issued food packages.

Also, according to the Center, the situation in Syria after the entry into force of the Memorandum on the establishment of a de-escalation all opposing parties is assessed as calm.

“After the introduction of the Memorandum on the establishment of a de-escalation in the Syrian Arab Republic, the situation on the ground all the opposing parties is assessed as calm. However, from the locals to the Russian Center of reconciliation continues to receive information about the impending terrorist groups “dzhebhat an-Nusra” (banned in Russia) and ISIS (the former name of the banned in Russia “Islamic state” – approx. TASS) attempts to disrupt the Memorandum,” – said in the message.

The Memorandum of understanding on de-escalation

As previously reported, delegations of Russia, Iran and Turkey during the talks in Astana agreed on the establishment of four zones of de-escalation in Syria. In these zones consists of Idlib province and parts of neighboring provinces of Aleppo, Latakia and Hama, the area to the North of the city of HOMS and Eastern ghouta and the southern province of Deraa and Quneitra.

The agreement provides that from may 6 in these zones, a ban on military activity, including aviation. The instrument is designed for six months and may automatically be renewed for the same period. The Russian defense Ministry previously said that the signing of the agreement in Astana not mean abandoning the fight against terrorist groups “Islamic state” and “Dzhebhat EN-Nusra”.