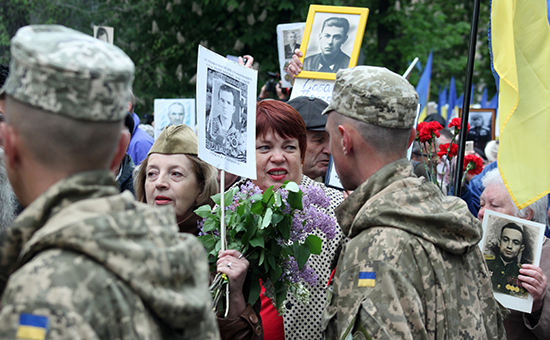 The interior Ministry of Ukraine stated that took place in Ukrainian cities, the action “Immortal regiment” is a “political provocation”, although not beyond the limits of the law. In celebration of may 9 in Ukraine took part several tens of thousands of people

The action “Immortal regiment”, which took place in some cities of Ukraine, does not go beyond the law if participants do not use the forbidden symbols, said the Director of the Department of communication of the Ministry of internal Affairs Artem Shevchenko. About it reports “112 Ukraine”.

“On the other hand, we understand that this action itself is a political provocation, a certain political technology, the authors of which sit in the capital of the aggressor country, especially thus fanning political passions in our red-hot war on the country, which is very painful to accept such things,” — said Shevchenko.

According to him, a considerable number of Ukrainians, “consciously or unconsciously succumb to this provocation.” He noted that the police can’t blame the protesters “or to appeal to their consciousness.” The role of law enforcement was to prevent the use of symbols of totalitarian regimes, added Shevchenko. We are talking about the symbols of the Soviet Union, which is prohibited in Ukraine according to the law on decommunization.

In Kiev in celebration of the may 9 held the action “Nobody is forgotten, nothing is forgotten” and “Immortal regiment”. In them have taken part about 3 thousand inhabitants of the city, reported to the police. The campaign was accompanied by riots between demonstrators and members of “the organization of Ukrainian nationalists”, past the building which held the procession, said the “112-Ukraine” (OUN banned in Russia). All were arrested 31 persons, six of whom resisted the police and using illegal symbols, two people detained for attempting to deploy a banner with St. George ribbons.

The celebration of may 9 in Zaporozhye came 3 thousand people, the “Immortal regiment” was held in Kharkov, Odessa and the Dnieper, where he was detained a few dozen people. The clashes were injured eight policemen and about 15 protesters, said the police.

Earlier the President of Ukraine Petro Poroshenko called the action “Immortal regiment” example “delicate political speculation on the feelings of the people,” adding that Ukraine will celebrate Victory Day, “the Moscow scenario.”