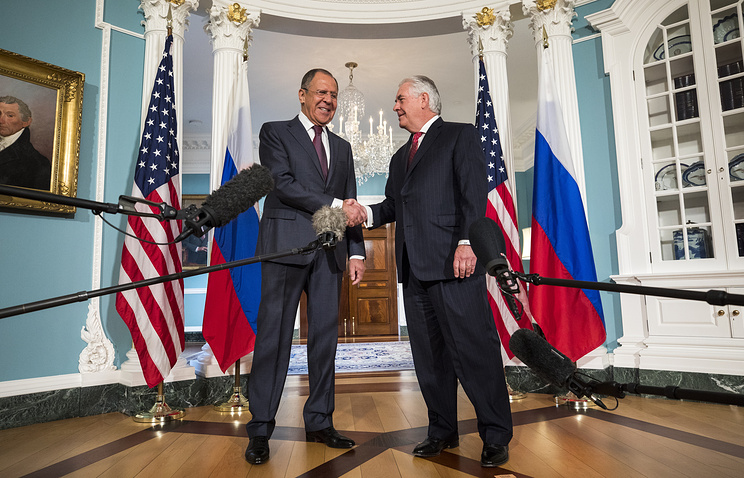 WASHINGTON, may 10. /TASS/. Negotiations Minister of foreign Affairs of Russia Sergey Lavrov and U.S. Secretary Rex Tillerson has begun in Washington. About it the correspondent of TASS from the venue.

As previously reported, the Russian foreign Ministry, the center of attention at the talks will be the situation in Syria. The parties will discuss settlement in Ukraine, the situation on the Korean Peninsula and bilateral issues.

The foreign Minister of the United States, since the meeting, said that the current negotiations of the Minister of foreign Affairs of Russia Sergey Lavrov and U.S. Secretary Rex Tillerson in Washington will be a continuation of the dialogue initiated by them in Moscow in mid-April.

“I want to welcome foreign Minister Lavrov, the U.S. state Department and to thank him for coming to Washington so we can continue our dialogue, our exchange of views started in Moscow in the course of the dialogue on a wide range of questions, which he (then) took,” said Tillerson. The visit of the chief U.S. diplomat in the Russian capital was held on April 11-12.

Lavrov introductory words uttered. To journalists the Russian foreign Minister and U.S. Secretary of state did not respond.

Lavrov arrived in the USA on Tuesday evening. His visit will last through Thursday. According to the Russian foreign Ministry, the talks with Lavrov Tillerson would like to exchange opinions on key international issues and topical issues of bilateral relations. Then Lavrov will attend a Ministerial meeting of the Arctic Council in Fairbanks (Alaska).