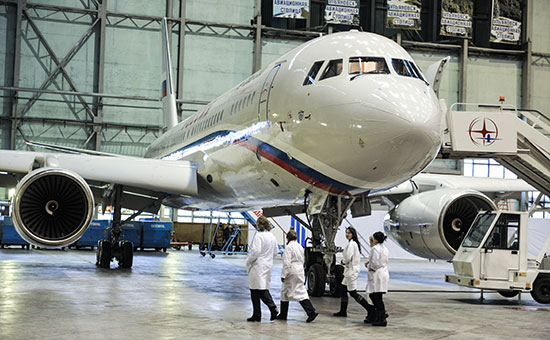 The interior Ministry will buy the Tu-204-300 at 1.7 billion RUB In the liner will be three hall and three Lounges, one of which will be located apartments of the “main passenger”

The Ministry of internal Affairs of Russia announced a tender for the supply of civilian passenger aircraft Tu-204-300 for 1.7 billion rubles, Relevant application posted on the portal of public procurement.

In describing the purchase stated that the ship, equipped with three halls and three rooms, which must provide transportation 55 passengers. In the first cabin will accommodate four seats, and apartments of the “main passenger”, which includes a bedroom with a double bed, wardrobe, dressing unit and study with a triple sofa. In the second cabin should be placed large stationary conference room tables, three seats and five-seater sofa. The third cabin will consist of blocks of seats business and economy class. Lobbies will accommodate toilets, wardrobes, cabinets and electrical equipment designated for flight attendants.

From the documentation on electronic auction it follows that the plane intended for the carriage of official passengers in the state aviation of Russia, countries of near and far abroad. The liner, designed for conversion, must be released not earlier than 2005 and to have the remains of an assigned resource on a delivery date not less than 19 thousand flight hours and 19 thousand landings.

To put the aircraft need up to 1 December 2018 to a military unit 3553 in Shchyolkovo-10 (Moscow region). Applications for participation in the auction can be submitted until 8 June 2017, date of the electronic auction — June 13.

RBC sent to the interior Ministry of Russia with the request to comment on the placement of the tender.

In early April, “Rain” reported that the head of Chechnya Ramzan Kadyrov to fly on business jet Airbus ACJ319 worth $80 million (4.6 billion rubles). According to the portal airspot.ru in the cabin there is a living room, bedroom, office, bathroom, conference room for 12 people, large LCD display, and means of special communication, and in the interior, applied a rare wood, special leather, marble and precious metals. Kadyrov confirmed that he has a private jet. In 2015, he declared an income of 5 million rubles.