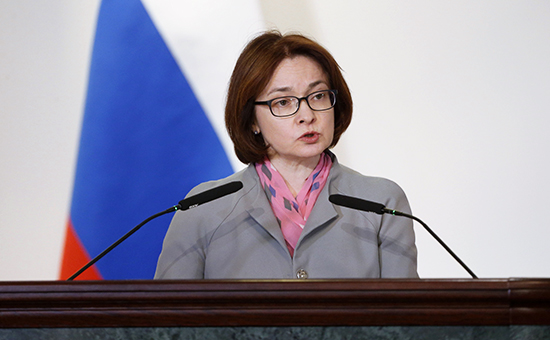 The opportunity to increase international reserves to $500 billion through renewed currency purchases may occur in achieving the target inflation, said the Chairman of the Bank of Russia. Experts believe that the Central Bank might start intervention this year

The Central Bank may resume the purchase of currency to increase international reserves after reaching the inflation target to 4%, said the Chairman of the Bank of Russia Elvira Nabiullina. “At the moment we believe it is possible to return to replenish reserves after reaching the inflation target of 4%”, — she said in an interview with the corporate publication of the communications Agency EM.

“Uncertainty and volatility in global financial markets make the important preparations of the Central banks to any possible economic shocks. But in any case we will buy the currency to increase reserves only in the case that the market situation will remain stable and our operations will not affect the exchange rate,” she said.

Nabiullina said that the Central Bank must ensure that inflation will remain close to the target of 4% in the medium term. “To achieve this goal, we must further weaken inflation expectations”, — she added.

Respondents RBC experts say that the regulator plans to resume currency purchases seem to be expected. Chief economist of the Eurasian development Bank (EDB) Yaroslav Lissovolik said that the main purpose of the regulator is the replenishment of the reserves without a negative impact on the dynamics of inflation and without increasing the deviation of exchange rate from equilibrium. “The Central Bank may resume purchases of foreign currency to prevent such strengthening of the ruble, which could reduce inflation below its target value,” adds the economist of “Renaissance Capital” Oleg Kuzmin.

“The timing of the purchases will depend, in part, from the situation with the payment balance,’ he says. — If there is a risk of inflation below the target by year-end, the possible resumption of foreign currency purchases of the Central Bank this year”.

According to Lisovolik, from the point of view of time horizons such operations can take place in the current year with a further decline in inflation and strengthening the ruble, he said. “If there is a risk of inflation below the target by year-end, the possible resumption of foreign currency purchases this year,” agreed Oleg Kuzmin.

However, according to the head of the foreign exchange and money market Metallinvestbank Sergey Romanchuk, Central Bank intervention can begin at any time. “In my opinion, the Central Bank may resume purchases of foreign currency for the reserves tomorrow as inflation reached almost 4%”, — he said. According to Rosstat, inflation in April was 0.3% (after 0.1% in March, 0.2 percent in February, 0.6% in January), and in annual terms, very close to the target and amounted to 4.1%.

“Guidelines for the single monetary policy for the 2017-2019” provide an opportunity to increase international reserves to $500 billion through renewed purchases of foreign currency for the implementation of the optimistic scenario. As he wrote RBC, it implies a gradual increase in oil prices to $55 per barrel by 2019. The implementation of this scenario is possible with “more dynamic and balanced growth of the global economy, boosting investors ‘optimism in the world markets”, as well as reducing the risks for the economies of developing countries.