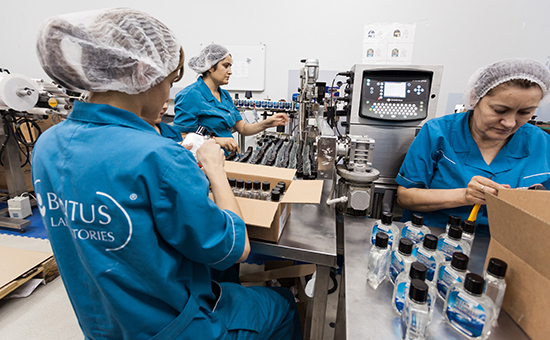 “SIA Group” Alexander Vinokurov became the owner of 30% of the company “Bentus laboratory”, says the joint message of the companies (RBC). According to “SPARK-Interfax”, the “SIA Group” purchased this bag from one of the first investors of the project — structures “VTB Capital asset Management”, member of the VTB Group. The representative of the “SIA Group” confirmed the structure of the transaction.

After the deal with the “SIA Group” the rest of the structure of the owners of the company have not changed — 20,88% of the company belong Cyprian “RMG holding limited”, 13,83% shares held by us “Simonian & associates Consulting Inc.” Mikayel Nalbandyan and the General Director of “Bentus laboratory” Hayk Simonyan. The remaining minority stakes distributed between five individuals.

Co-owner “Bentus laboratory” VTB Group (the buyer was a “Second regional venture Fund of investments into small enterprises in scientifically-technical sphere of the city of Moscow”) was in 2009. As told RBC, the founder and the basic owner “Bentus laboratory” Ruben Simonyan, 30% of the company was valued at $4 million raised funds the company spent on the expansion of production and promotion.

“Bentus laboratory” was founded by Simonyan in 2005 and became the first company which began to offer antiseptic under the brand Sanitelle (basic format — gels, antiseptics) to consumers. The businessman was the first to negotiate the sale of gels not only in pharmacies but also in the largest Russian retail networks. In 2007, the company received the first investor — 10% of the company acquired investment company Rye, Man & Gor Securities (the transaction amount was not disclosed), and in 2009 the funds were raised also on the structures of VTB. “Bentus laboratory” has its own production in Moscow, in the portfolio of brands in addition to Sanitelle products under the brands of Sanipone. The company also develops b2b referral for specialized medical care. Revenue “Bentus laboratories” in 2016 — 240 million rubles.

The Chairman of “VTB Capital asset Management” Vladimir Potapov said the asset was sold to a strategic investor within the end of the term of existence of the Fund. “Effective management of the asset allowed us to successfully develop and implement the project. The company is already a market leader antiseptics for hands and has significant potential for further growth with a new strategic investor, the “SIA Group”” — said Potapov.

General Director DSM Group Sergey shuljak calls “Bentus laboratory” the largest manufacturer of antiseptic agents in the b2c segment. According to him, the structure of the VTB could sell the package at least 2-3 times more expensive than the cost of the acquisition.

For “SIA Group”, according to the report, the purchase of “Bentus laboratories” — “a step to expand the production assets of pharmaceutical holding”. The group is already part of the namesake distributor of production of OJSC “Joint-stock Kurgan society of medical drugs and products “Synthesis” and JSC “Biocom” and the pharmacy chain “Mega farm”.