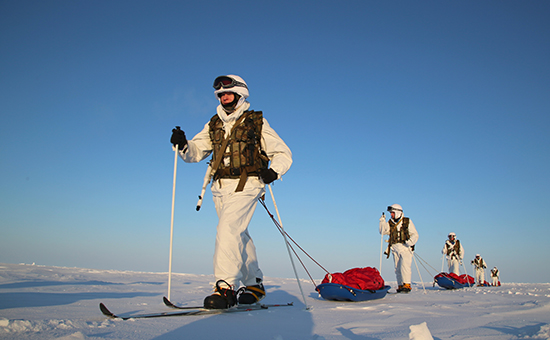 The cost of the state program on development of the Arctic can be reduced 209,7 billion to 50.9 billion rubles, According to RBC, it is proposed to exclude a number of infrastructure projects and the construction of an icebreaker Lider

The icebreaker in question

One of the interlocutors of RBC said that the proposals on optimization of the programme was submitted to the Ministry of economic development, which is its curator. A source in the Ministry explained that, formally, to reduce costs proposed by the government taking into account the comments of the Ministry of Finance is the only one of the relevant agencies, not to agree a draft programme.

The Finance Ministry did not respond to a request RBC.

What is the state program for the development of the Arctic

The program of socio-economic development of the Arctic zone of the Russian Federation for the period up to 2020 and beyond was developed by the Ministry of regional development in April 2014. Then the document had an analytical character and do not determined the amount of required funding. The Ministry of economic development was instructed to finalize. February 1, 2017, the office submitted to the government a new version of the program containing the calculations for funding projects totaling more than 209 billion.

“According to the new wording of the state program, the money is needed for the construction of the atomic icebreaker “Leader” of the funds of the sunken nuclear objects, development of projects on the continental shelf, the development of new technologies for Arctic purposes, environmental monitoring, information policy, support of indigenous peoples,” TASS cited the explanations of the Deputy Minister of economic development Alexander Tsybulsky.

Icebreaker Lider, with a capacity of around 120 MW needs to break the ice with a thickness of more than four meters; it can hold on the Northern sea way large-capacity tankers with a deadweight of 30 thousand tons, including LNG, quoted “the Russian newspaper” General Director of Krylov state research centre Oleg Timofeev. The cost of construction of the vessel was estimated at 40-80 billion.

The Ministry also suggested the programme to create in the Arctic eight reference areas, focused on the development of the Northern sea route and the growth of cargo transportation by sea and rivers, including the export of Kola, Arkhangelsk, Nenets, Vorkuta, Yamal-Nenets, Taimyr-Turukhansk, North Yakutia and Chukotka.

According to two interlocutors of RBC familiar with the decision of the meeting the head of government, from the Arctic the state program eliminated the construction of the atomic icebreaker “Leader” worth about 80 billion rubles, that Rosatomflot was planned to be built by 2023 at the shipyards of Saint-Petersburg or Severodvinsk to work to ensure the passage of large LNG tankers through the Northern sea route.