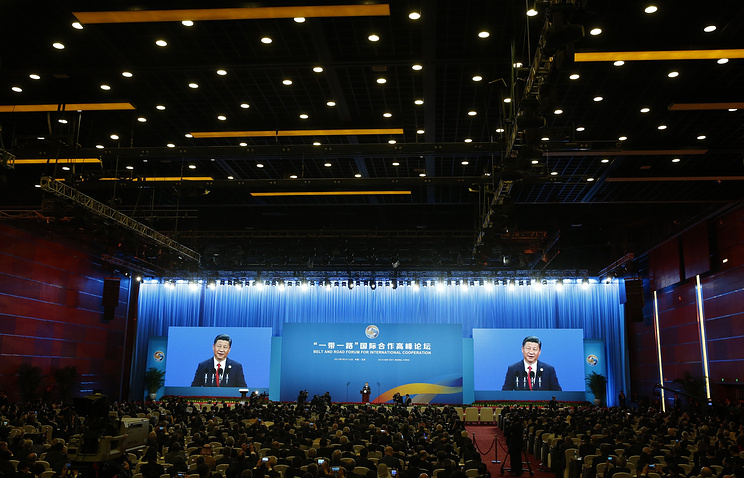 BEIJING, may 14. /Offset. TASS Andrei Kirillov, Nikolai Selishchev, Alexei Selishchev/. International economic forum “One belt and one road” opened in the Chinese capital with a speech by the Chinese President XI Jinping. The opening will be the President of Russia Vladimir Putin, UN Secretary-General, antónio Guterres. In the list of “very important” participants – heads of States and governments of three dozens of countries, managing Director of the International monetary Fund Christine Lagarde, world Bank President Jim Yong Kim.

All in all, will feature more than 100 countries, discussions will take place on a multilateral basis. The total number of participants is more than 1.2 thousand people, even more covering the event journalists.

“At a distance of thousands of miles over the millennia, the ancient silk road formed the spirit of peace and cooperation, openness and participation, mutual learning and mutual benefit,” said XI, stressing that “the spirit of the silk road became a great contribution to human civilization”.

The Chinese initiative of “One belt and one road” is of great importance for the overall development, because, in fact, can be considered as the heritage of human civilization, said XI.

“About 2 thousand years ago was opened transcontinental passage connecting Asia, Europe and Africa,” said the Chinese leader, stressing that in our time it has become “the embodiment of peace and cooperation, openness and tolerance, mutual understanding and mutual benefit”. “History is our best teacher, and she tells us: civilization develops at the expense of openness, coexistence of Nations is ensured by their integration,” he stressed.

According to XI Jinping, in recent years the international community has to solve many problems of a complex nature, which require joint efforts.

The concept of the Economic zone of the silk road and Maritime silk road of XXI century (in abbreviated form – “One belt and one road”) has been nominated by the President of China in 2013. This Chinese super project aimed at the creation of transport, energy and trade corridor between the countries of Central, South Asia and Europe, and more broadly on the deepening of economic cooperation between dozens of States, the intensification of scientific and technical cooperation between them. Experts point out the paramount importance of this initiative for China. Its foreign markets decline, which significantly limits the production sphere of the second economy in the world.

China is an interested supporter of the continuation and expansion of processes of globalization, as has been said by the leaders of the country. The volume of investments of China in foreign countries in the next five years may reach 600-800 billion dollars. It is emphasized that a significant part of this investment will go to countries in the Economic belt of the silk road.

“Our President together with the Chinese President and the UN Secretary-General will speak at the forum’s opening ceremony. Mean that Mr Putin will present Russia’s vision of the prospects of economic development on the Eurasian continent. He will propose a number of concrete initiatives on building the shortest cost-effective and efficient transport routes through the territory of Russia and the Eurasian economic Union for the delivery of goods all the way from the Atlantic to the Pacific,” – said at a meeting with journalists by the Russian presidential aide Yuri Ushakov.

For Russia, said Ushakov, the most relevant aspect is the combination of the projects of Eurasian integration with the Chinese project silk road. The Russian head of state during the forum will offer participants to join the project of Asian energy ring. This issue will be considered during one of the round tables, which will be held on the second day of the forum, may 15.

According to him, Putin will also propose initiatives for pairing a variety of integration processes in Europe and Asia, on the basis of universal principles and WTO norms. In addition, will be marked by the need to ensure security and stability as an important condition for extending trade and economic cooperation in the development of integration processes.

The forum will host a series of round tables with participation of heads of States. Planned and important bilateral meetings. According to tradition, will be sharing photographs of the main participants. Today will be a reception on behalf of the President of China with his wife and a gala concert.

From Russia to China arrived Deputy Prime Minister Igor Shuvalov, foreign Minister Sergei Lavrov, energy Minister Alexander Novak, economic development Minister Maxim Oreshkin, head of the Ministry of Finance Anton Siluanov, Minister of transport Maxim Sokolov, the head of the Ministry of Far East development Alexander Galushka. In Beijing will also be representatives of Russian business – the head of Russian Railways Oleg Belozerov, chief Executive officer of “Rosneft” Igor Sechin, Chairman of the Supervisory Board of “Basic element” Oleg Deripaska, the head of RDIF Kirill Dmitriev, the Chairman of the Board “Gazprom” Alexey Miller, the owner of Volga Grour Gennady Timchenko, Chairman of the Board of “NOVATEK” Leonid Michelson and others. They have planned their own programme of meetings and negotiations, briefings for journalists.