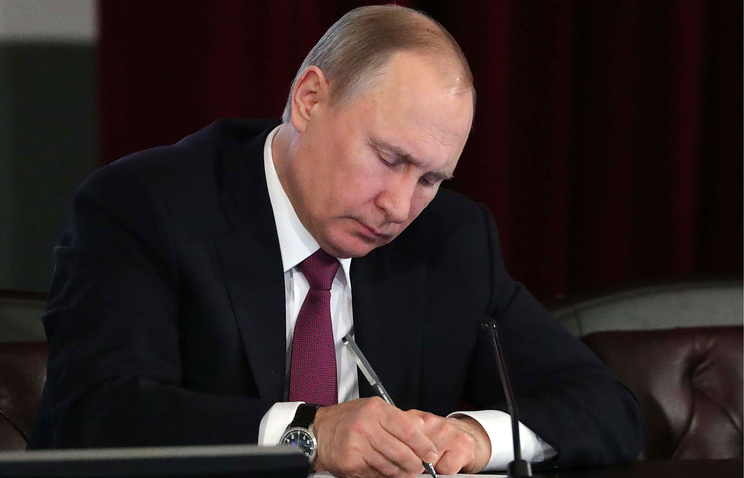 MOSCOW, may 15. /TASS/. The President of Russia Vladimir Putin approved the strategy of economic security of the Russian Federation for the period up to 2030, which defines the challenges and threats to the economy, as well as the goals, main directions and tasks of state policy in the sphere of security. The corresponding decree published on the official portal of legal information.

“This strategy is aimed at the counteraction to challenges and threats to economic security, the prevention of the crisis phenomena in natural resource, industrial, scientific, technological and financial spheres, as well as to prevent reducing the quality of life of the population”, – stated in the decree.

According to the document, the government needed three months to develop organisational, regulatory and methodological nature, necessary for the implementation of the strategy.

Text of the strategy it is noted that the main objectives of state policy in the sphere of ensuring economic security is to ensure economic growth and improve economic resilience to external and internal challenges and threats.

The main threats and challenges to the economic security strategy will include the commitment of developed States to use the advantages for the level of economic development and high technologies as a tool of global competition, the use of discriminatory measures against key sectors of the Russian economy, the vulnerability of the Russian financial system, the reduction of energy demand, technological gap and fiscal imbalances.

As the main policy objectives to ensure the economic security strategy refers to the increasing economic resilience to external and internal factors and threats and ensuring economic growth and maintaining scientific and technical capacity. The major areas in the implementation of this policy will be the development of the system of state management, forecasting and strategic planning in the sphere of economy and creation of conditions for development and introduction of modern technologies.

Among the measures to achieve those objectives in the strategy refers to improving the investment climate, de-offshorization of the economy, improvement of the mechanism of response in case of sanctions, the optimization of the tax burden on business, increasing the efficiency of budget spending, to overcome the dependence on import of sophisticated equipment and preventing hostile takeovers.

The strategy also involves the creation of a national system of risk management, which involves identifying and assessing existing and potential challenges and threats, as well as the planning of measures on realization of state policy in the sphere of ensuring economic security.
Among the indicators of state economic security strategy calls the index of physical volume of gross domestic product (GDP), the share of Russia’s GDP in world GDP, the level of public debt, the share of high-tech products in GDP and other economic indicators.

The previous state strategy of economic security was adopted in 1996. The decision to develop a new document was adopted at a meeting of the security Council (SC) of the Russian Federation in July 2015. Since then, he has been discussed on the area SB of the Russian Federation. In particular, the members of the scientific Council under the security Council stressed that in conditions of increasing instability of the global economy and a sharp aggravation of global competition emergence of new challenges and threats to national security and sustainable development in Russia, therefore there is a need to update the conceptual approaches to formation of system of economic security.

“According to experts, the economy and the economic interests of the state, society, citizens become the main target in the field of global competition, previously reported in a press-service SB of the Russian Federation. – A wide set of economic restrictions is increasingly being used by foreign countries to achieve geopolitical and domestic goals.”

In this regard, it was proposed to include the protection of national sovereignty in the economic sphere, the concept of “economic security.” In addition, the scientific Council recommended to formulate a detailed description of threats and challenges to Russia’s national interests in the field of economy at present and in the near future. An important factor of economic security was asked to consider the quality of governance.