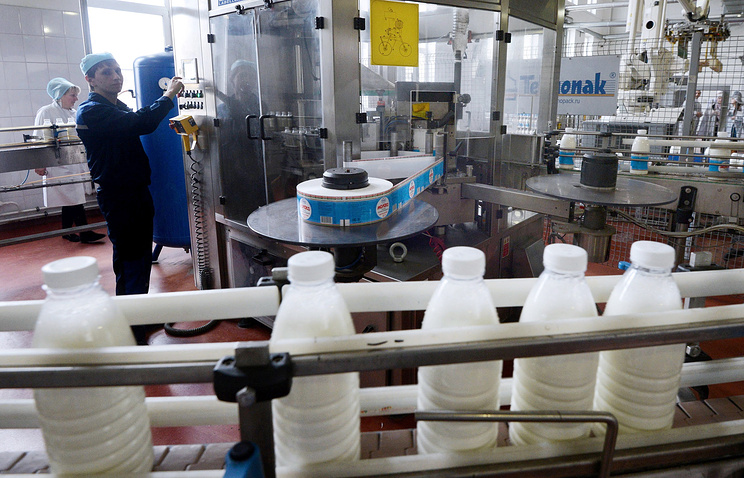 MOSCOW, may 15. /TASS/. The Rosselkhoznadzor from may 15, 2017, introduces a regime of enhanced control in respect of nine companies of Belarus in connection with the identified violations in the production of dairy products. About it reported in a press release of the Russian authorities.

In addition, the Rosselkhoznadzor imposed temporary restrictions on product export from the navel “Milk pole” because of violations in the production of milk.

As told TASS in the management office for the Bryansk and Smolensk regions, the violations were identified during the control of incoming lots of powdered milk. “Almost 35% of the 83 investigated parties contained veterinary antibiotics”, – said the Rosselkhoznadzor. According to the norms of the presence of agricultural products veterinary drugs is unacceptable, as in humans, they can develop immunity to the antibiotics prescribed by doctors in the treatment of any disease.

The reason for supervision was the increase in the supply of raw milk from Belarus to the Russian market. “In this dairy cattle population in the Republic of Belarus have not increased, this suggests that the growth of production used techniques with the active use of veterinary drugs,” – said the representative office. Also the interlocutor of the TASS noted that the use of these drugs confirms the health problems of animals in the raw zones of Belarus. Rosselkhoznadzor noted that about half of all Belarusian dairy products imported to Russia across the Bryansk and Smolensk regions.

Earlier, Deputy Minister of agriculture and food of Belarus – Director of the Department of veterinary and food supervision Alexander Subbotin has informed that the working meeting of representatives of agricultural departments of Belarus and Russia will take place on 15 may in Moscow. According to him, the meeting will discuss a number of issues, including the results of inspections of the Rosselkhoznadzor. He also said that during the work in Belarus (2nd may-12th may – approx. TASS) representatives of the Russian authorities called for 13 enterprises processing milk, meat and fish.

Two groups of specialists of the Rosselkhoznadzor in may inspected processing plants in all regions of the Republic. In connection with restriction of supplies of Belarusian products to Russia from 5 to 13 April at the Belarusian enterprises worked the first five groups of inspectors of the Department. Inspections were conducted at 17 of the processing enterprises of the country, including five dairy, meat eight, two fish, two poultry farms and three dairy farms. After the inspection, the Rosselkhoznadzor has allowed the import of products of Belarusian enterprises to Russia.