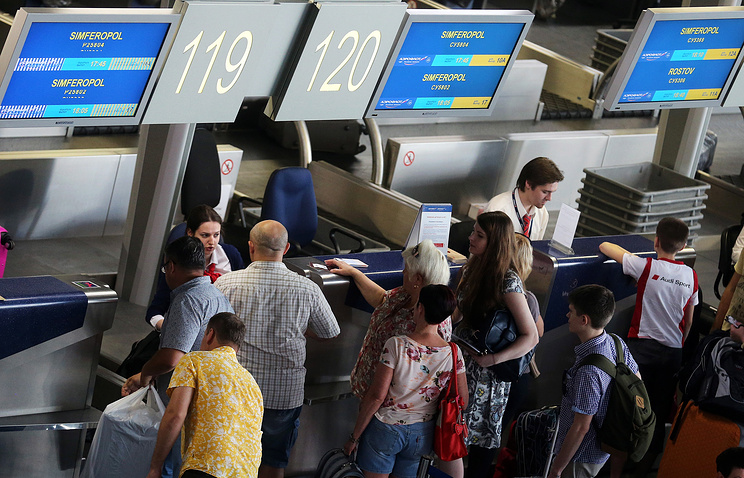 MOSCOW, may 17. /TASS/. Aeroflot last week sold a third of the planned 28 subsidized thousands of tickets to Simferopol. About TASS said the official representative of the airline.

“In the current season as of may 17 sold/booked 10 717 tickets for the subsidy program to the Crimea. Just for this program and plan to carry more than 28 thousand people,” – said TASS, the official representative of the company.

Sales of these tickets were opened on 12 may. The flights from Russian regions to Simferopol in the subsidy program performs a subsidiary of the airline “Russia”, the ticket carries out “Aeroflot”.

Moreover, apart from the subsidy programme, “Aeroflot” from 2014, all year round carrying passengers in economy class from Moscow to the Crimea on a “flat rate” in 9 350 rubles round trip.

“In 2016 on the Moscow – Simferopol at the flat rate, there were more than 660 thousand people. The ticket is at a fixed rate in economy class are available to any passenger without any restrictions, – said the representative of the airline. Flat rate also applies for flights to Kaliningrad, Vladivostok, Khabarovsk, Yuzhno-Sakhalinsk, Petropavlovsk-Kamchatsky and Magadan. Only in 2016 took advantage of the flat rate of 1 million 773 thousand persons”.

May 15 seven Russian airlines started flights on the subsidized routes in the Crimea. Special rate on flights to the Crimea will be valid until November 30. Budget funding for the program totaled more than 475 million rubles. Six and a half months, airlines will be able to carry 141,5 thousand passengers, reported earlier Rosaviatsia.

The cost of subsidized tickets depending on the flight range will be in one direction from 2,5 thousand to 12.5 thousand rubles. According to Rosaviation, the flights will carry the airline “Aeroflot” ALROSA, S7, “Saratov airlines” Red Wings “Izhavia” and “Ural airlines”.

In 2017, the program of subsidized flights included 36 Russian cities. The cheapest tickets (2.5 thousand rubles) will be offered during the flight from Volgograd, Voronezh, Krasnodar, Kursk, Lipetsk, Mineral Water, Penza, Rostov-on-don, Saratov, Yaroslavl. The most expensive flights in the Crimea – from Magadan (12,5 thousand).

Moscow and St. Petersburg in a program of subsidizing flights to the Crimea are not included.

To purchase tickets at a special rate, according to Rosaviation, will only Russian citizens under 23 years of age, women over 55, men over 60 years, disabled person of group of any age and his or her companion and the person accompanying a disabled child, disabled since childhood of II or III group.