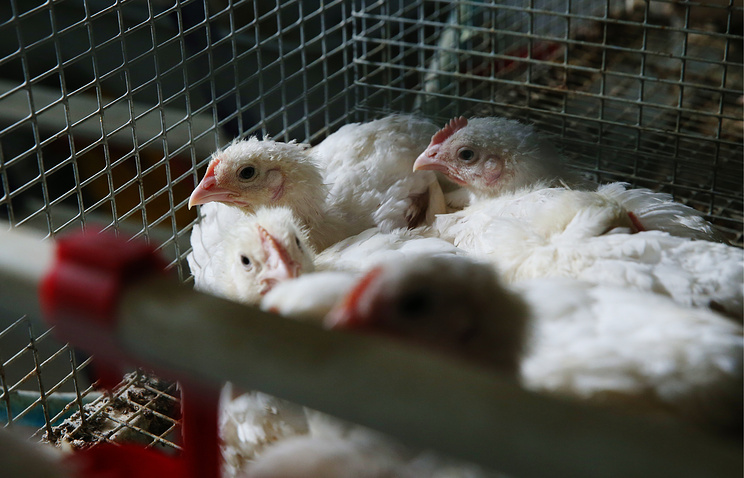 SARATOV, may 16. /TASS/. The threat of avian influenza was the cause of the prohibition of importation of poultry meat and eggs, and vegetable in some regions of the Volga Federal district.

The ban on imports already entered in the Perm Krai, the Chuvash Republic, Orenburg, Saratov, Penza and other areas.

“On the territory of the Republic of Tatarstan complicated epizootic situation on disease of a bird flu. To prevent the introduction of infection, up to 15 Nov 2017, a ban on the import of live poultry, poultry products, feed and feed additives, delivered on the territory of Tatarstan,” – said in the Department of veterinary of the Government of the Saratov region.

To the state veterinary Inspectorate of the Perm region, in turn, stressed that in order to not spread disease, you should restrict not only import of animals of all kinds, but also products of animal and vegetable origin, feed and equipment.

Outbreak of avian influenza was detected in large complex of Tatarstan “Laishevo”. Here, for a period from 3 to may 8 fell about 5 thousand heads. According to the veterinary surveillance, a suspected source of infection is wild birds. In this regard, in the Orenburg region decided not only to strengthen control over import to the territory of the region of live animals and birds, but also to carry out the quarantine of places and nesting migratory birds.

In the Chuvash Republic government the special emphasis is on the prevention of individual entrepreneurs and local residents containing personal economy. According to the Chairman of the government’s emergency anti-epidemic Commission Sergey Artamonov in the Republic approved a comprehensive plan of preventive measures.

So, entrepreneurs warn of the need to insure livestock and stock up on disinfectants. Residents of villages, containing in the personal farm of chickens and ducks, will distribute the leaflets.

As reported TASS in the Ministry of agriculture of the Penza region, which also imposed a temporary restriction on the importation of poultry products from Tatarstan, all such enterprises are now in the “closed type”.

“At the moment are over 10 large and medium poultry farms. Everywhere the situation is safe”, – said in the Ministry of agriculture of the region.

According to the head of Department bio-security Agency of veterinary science of the Ulyanovsk region Andrey Silantyev, at the moment of particular danger is the unauthorized importation of poultry from other regions. “To prevent introduction of the virus to poultry enterprises must operate in the mode of “enterprises of the closed type”, and trade of poultry be carried out strictly in certain places,” – said Silantyev.

Previously TASS reported that on may 10, in Tatarstan entered quarantine for 3 months on the territory of the poultry farm “Laishevo”, where the fallen birds were detected bird flu, the livestock complex in 447,8 thousand heads will be destroyed.

Later, the veterinary Directorate of the Cabinet of Ministers of Tatarstan has revealed new outbreaks of the disease on the farm and in the backyard in Nurlat, Fish Slobodsky, Yutazinsky districts and Kazan.

“By decree of the President of the Republic of Tatarstan restrictive actions (quarantine) on avian influenza for the period up to their withdrawal in some areas of the specified areas,” – said the press service management.