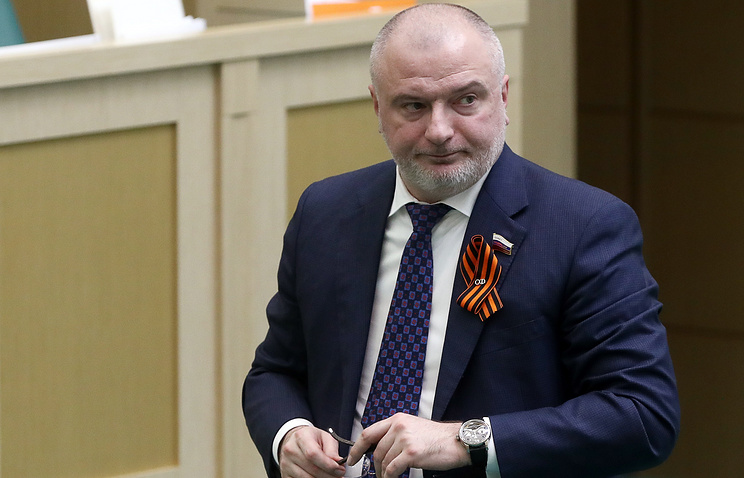 MOSCOW, may 17. /TASS/. Introduction by the Ukrainian authorities to ban the use of the symbol of Victory – St. George ribbon is a blasphemy, a triumph of obscurantism and speaks about the value crisis of the state. This opinion was expressed to journalists by the Chairman of the Federation Council Committee on constitutional legislation and state construction Andrey Klishas.

According to him, the decision before the decision of the Verkhovna Rada to ban the use of the ribbons, along with other introduced restrictive measures will not lead to anything else as to the escalation of the social crisis. “Ban St. George ribbon, the cultivation of Russophobia, the denial of their own history – a pure triumph of obscurantism” – quoted Klishas his press service.

According to the Senator, Russophobia, which is cultivated by the authorities of Ukraine to solve internal political problems are already close to climax. “Forced change of values of society through the use of lies and changing the subject can give a different result, but the destruction of statehood. The representation of the symbol of the great Victory in the eyes of its citizens as a “symbol of the enemy, invented by the Soviet propaganda”, as he calls it the people’s Deputy of the Verkhovna Rada of Ukraine Dmitry Linko, does not carry anything but insult society”, – said Klishas.

According to the Senator, the adoption of laws and statements of this nature indicates a continuity of beliefs of the ruling class of Ukraine with the ideas of those who over 70 years ago, was convicted by the Nuremberg Tribunal for crimes against peace and humanity.

“A torchlight procession in honor of the birthday of Stepan Bandera in Kiev, the use of “battalions of special purpose” symbols, similar to the symbolism of the SS, holding on the eve of the Victory Day marches with portraits of Roman Shukhevych and Stepan Bandera – all this against the backdrop of arrests of participants of the action “Immortal regiment” in Kiev and abuse of veterans of the great Patriotic war, shows a deep value crisis of the state”, – said Klishas.