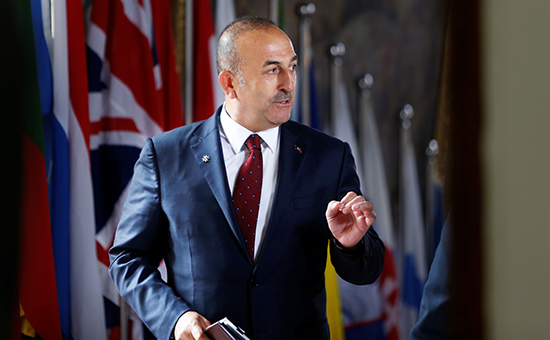 The Minister of foreign Affairs of Turkey Mevlut Cavusoglu said about the lack of effectiveness of NATO in the defense of the airspace of Turkey. Thus he commented on the possible withdrawal of Germany from a base in Incirlik

In an interview with CNN Turk Cavusoglu said that the ongoing NATO action to protect the air space of Turkey is not effective. Commenting on the plans of Germany to withdraw its troops from the air force base in Incirlik in the South-East of the country, the foreign Minister pointed out that to persuade the Germans to remain Ankara is not going to.

“If you want to go, then we will say good-bye,” added Cavusoglu.

Also the foreign Minister called for the resignation of Brett Makhorka, special envoy of the United States at the anti-terrorist coalition. He explained this by the fact that Mcguirk openly supports the Kurdish group YPG and Kurdistan workers ‘ party, which Ankara considers a terrorist organization. “It is right if that person leaves office,” — said Cavusoglu.

Grievance Makharam the Turkish authorities came after the Internet appeared the photograph of an American representative with the militants of the PKK, which Ankara had declared in the international search.

An interview with the Turkish Minister appeared a week before the NATO summit in Brussels.

Relations with official Ankara’s allies in NATO have deteriorated after the failure of a number of Western European countries allow Turkish Ministers to visit with the purpose of agitation among the migrants in favor of President Recep Tayyip Erdogan. As a response, Turkey has banned German parliamentarians to visit the base in Incirlik, where the service of 260 soldiers of the Bundeswehr.

May 15, German Chancellor Angela Merkel said that in case of Turkey’s refusal to let the parliamentarians in Incirlik, Berlin will examine the question of the withdrawal of its contingent. As one of the alternative aircraft Tornado was named Jordan.