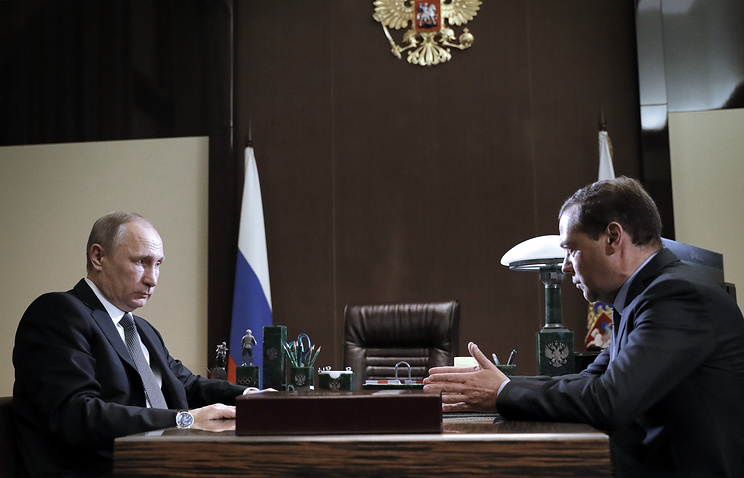 The government action plan until 2025 envisages an exit of the Russian economy in the period 2019-2020 to the growth at and above the global average, said the Prime Minister.

“In accordance with your instructions, the government has prepared a comprehensive plan is a General approach regarding how can develop our economy and social sphere in the period from 2017 to 2025, as you rightly said, having in mind the task that was set by the President in the message,” – said Medvedev at a meeting with Russian President Vladimir Putin.

“Namely, the output somewhere in the period 2019-2020 to the growth of our economy on the level of average and above average. This will enable our economy to develop faster and to solve basic social problems”, – said the Prime Minister.

“This is the purpose of the plan itself. It includes quite a lot of different proposals,” – said Medvedev.

Them, he said, need to be discussed, having in mind the parallel development of appropriate proposals by the expert community. “We are in direct contact, discuss the different proposals,” – said the Prime Minister.

The importance of economic strategy

Russia should have a clear plan for the development of economy and social sphere, regardless of personalities and political graphics, said the President of the Russian Federation.

“I asked the government to prepare a plan of economic development, determine promising directions of development of the means to achieve these goals for the period 2017-2025. Mean not only internal political plans and the political agenda, but that our well-known blueprint for 2020, we had to adjust accordingly, and 20th year is not far off,” – said Putin.

“Regardless of any personalities, regardless even of the political graph of the country should have a clear and understandable plan for the development of economy and social sphere”, – he said.

He invited the Prime Minister to discuss the ideas of the government, and then by readiness and development experts will be finalized.

The draft strategy from the government

The head of the Ministry Maxim Oreshkin reported earlier that the government prepared a draft economic development plan to 2025, which involves the implementation of measures for the acceleration of growth until the average rate, should ensure predictability of economic conditions for doing business in Russia, and for the lives of citizens. A key factor to accelerate the pace of growth should become the subject of increasing productivity.

For the development of the plan, the Ministry has established 10 working groups in different directions, among which tax policy, export support etc.

In February Medvedev has introduced several key areas of the plan. So, according to him, one of the main tasks for the period until 2025 is to ensure the stability of macroeconomic dynamics and the system of tax payments. Another set of measures to enhance efficiency in employment. The third most important task of the head of government mentioned the creation of smart economy based on intellectual potential of the nation, on science and technology.

That the draft government program of economic development for the future is at the final stage of preparation, the President announced on may 15, answering the journalists ‘ questions. Then he said that in the near future the Prime Minister will represent.

The work of experts

In addition to the Cabinet, over the software development work and other experts, in particular the “Stolypin club”, and the Center for strategic research (CSR), which is headed by ex-Finance Minister, Deputy Chairman of the Economic Council under the President of the Russian Federation Alexey Kudrin.

Last week during a meeting with journalists the President has promised that the Kremlin will not only acquainted with all proposals of experts, but also see “what can be done on the basis of these proposals as ways of strategic development of economy and social sphere of our country in the coming years.”

Putin did not agree with the view that such programs often remain on paper and are not implemented. According to him, strategies to produce movement direction in the development and determine the priorities even if the economic reality is different.

CSR also intends shortly to submit to the President their proposals on the development strategy of Russia until 2025. As told reporters he Kudrin, a meeting is scheduled for the end of may.

According to Kudrin, in contrast to previous programmes in the new strategy affected the social development values of society, judicial and law enforcement system, the integration of Russia into international program.

The head of CSR said that important units of the program will conduct wide public discussion. He explained that this strategy was among professionals behind closed doors, though. The next round of discussions could take place in the involvement of the media, he said.

May 15, answering a question of journalists on why the draft strategy CSR is not discussed publicly, Putin advised the media, “chided Kudrin” on it. The head of state spoke in favor of the fact that such documents were submitted for broad public discussion.